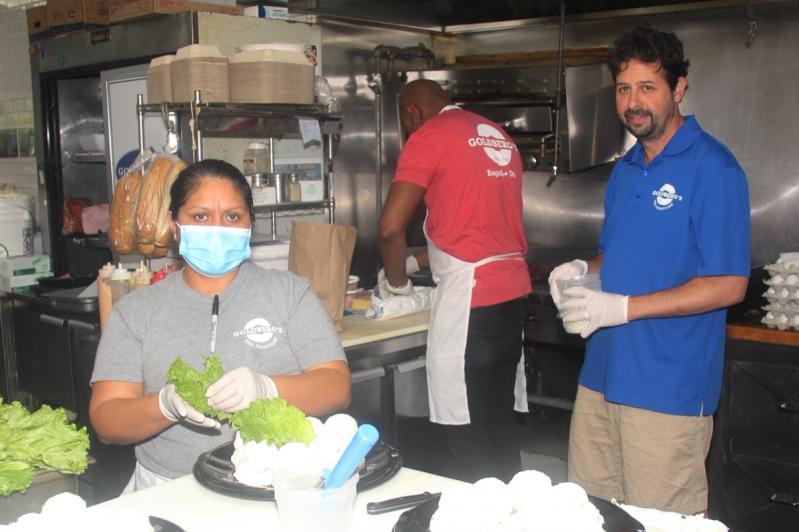 On a recent weekday morning, a dozen employees behind the counter at Goldberg's Famous Bagels in East Hampton took orders, made sandwiches, toasted and schmeared bagels with cream cheese, brewed coffee, and more.

Behind them, two employees placed raw bagel dough -- white, wheat, pumpernickel, cinnamon raisin, egg -- into a steaming vat of water about the size of a home washing machine. Racks of bagels-to-be were nearby, with their dough rising before they were to receive their hot water bath. This was followed with a plunge into a 475-degree oven.

East Hampton is one of nine locations for Goldberg's, which dominates bagel production on the East End. Paul Wayne, one of the owners, manages many of them, mainly focusing on the big East Hampton branch but keeping a close eye on Montauk and Napeague, too. In Southampton, socially distanced lines trail out of the shop and along the front of the strip mall its branch calls home, visible to passersby on County Road 39. Goldberg's has added an ordering app allowing customers to avoid the lines, but on busy weekends there are often people waiting even for pickups.

The business was established in 1949 with a chain of stores in Brooklyn, Queens, and New Jersey. Marc Goldberg, who opened his first East End store in Southampton, learned the business from his father, Artie Goldberg, starting at age 14. In addition to bagels, the stores offer traditional deli staples, wraps and sandwiches on other types of bread, and homemade soups in the cooler months.

Its Instagram account amounts to carbcore, with its posts of split open bagel sandwich creations featuring a variety of fillings: egg and bacon, Nova Scotia salmon and the fixings, chicken breast, tuna salad, turkey, ham, and lots and lots of cheese.

Mr. Wayne explained that there are five steps to making a bagel. First, all the ingredients are mixed for about 12 to 13 minutes. Then, the bagels are formed either by hand or machine. Next, the bagels are proofed for a day and a half before being boiled and baked. The boiler used at Goldberg's in East Hampton is large and intimidating, with scalding hot water and steam hovering around the top. This does not seem to alarm the employees, who step around it without a glance.

Situated next to the boiler are the ovens, both large machines are located in a small alcove clearly visible to customers. While equally great in size, they also don't frighten the passersby. After being boiled, a bagel is baked in the oven for approximately 16 minutes, although Mr. Wayne says that the cooking time depends on the particular oven.

By the door, sit two boxes of sesame and plain bagels to be transported to other locations. Mr. Wayne mentioned that plain is the most popular bagel, with the everything bagel right behind it.

When asked about the secret to bagel making, Mr. Wayne said that "it takes a lot of history and experience." Goldberg's is a family business, and he is the third generation in his family to be part of it: He's been in the bagel business for 10 years.

The ingredients in bagel are crucial, and for Goldberg's there are only five to start: salt, brown sugar, yeast, flour, and water. Many New York bagel lovers will tell you that water is very important to the flavor of the bagel, and Mr. Wayne confirmed that the New York and Long Island water "makes our bagels unique."