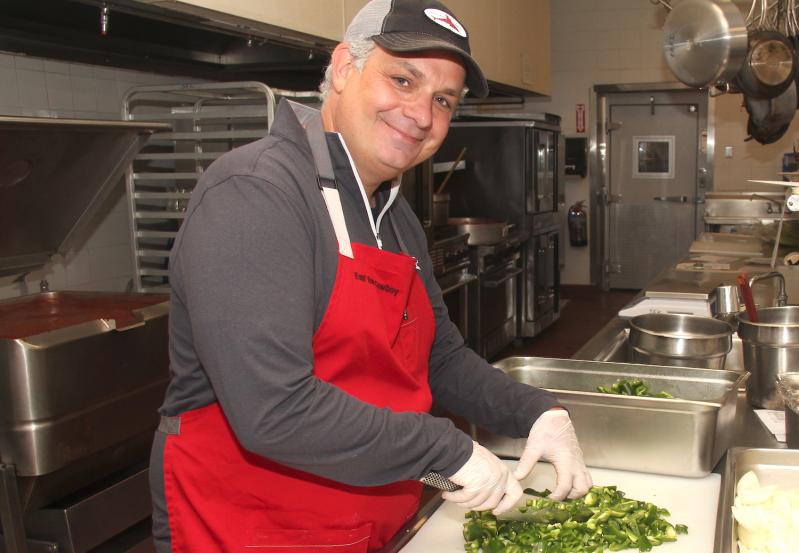 Jason Wagenheim, the founder of East End Cowboy, cooks up the company's varieties of barbecue sauces at the East End Food Institute in Southampton.
Durell Godfrey
By Christine Sampson

If visions of ribs or burgers sizzling on the grill — stoking anticipation of backyard barbecues and icy summertime drinks with friends and family — sound appealing, take a look at Jason Wagenheim's Instagram page (@east.end.cowboy).

Then you might just want to pick up Mr. Wagenheim's special blend of sauce for grilling, his East End Cowboy barbecue sauce, which he cooks up at the East End Food Institute in Southampton.

"It started in the backyard, as barbecue stories do," he recalled in a recent interview. "I've hosted barbecues for upwards of 50 to 60 people. They'd say, 'Jason, you should open a barbecue restaurant or bottle this sauce.' "

A restaurant is out of the question — at least for now — for Mr. Wagenheim, a 25-year veteran of the publishing industry whose main occupation is president and chief revenue officer of the Bustle Media Group. But bottling his sauce was a nice compromise, as it turns out. That Instagram feed is basically an illustrated history to rival any well-known barbecue brand — take that, Sweet Baby Ray's and Stubb's.

"What can this brand be?" Mr. Wagenheim said. "We love, love, love the local farm stands and support as many as we can. I'd run over to Share the Harvest Farm and pick up a ton of their onions, garlic, jalapenos, peaches, and cherries, and I'd start making sauce."

"The whole idea is that I love the rich heritage of the farming community out here, and if I can capture that flavor and spirit in a barbecue sauce, that's the essence of our story," he said.

Food has long been a unifying force for Mr. Wagenheim, from the family dinners of his youth in suburban New Jersey in the 1980s to the barbecues he has been hosting at his Northwest Woods house in East Hampton since 2015. "Some of the best memories I have are of sitting around the Thanksgiving table together and sharing. That's as much the case now," he said.

Often squeezing in late nights at the East End Food Institute kitchen, Mr. Wagenheim cooks up two blends to sell locally and on his website, eastendcowboy.com — honey peach and apple jalapeño. (He has other recipes, but this is what's currently available for sale.)

"Most of my sauces go really well with pork and chicken," he said. "We love getting chickens from Iacono Farm and doing smoked chicken. Ribs are my specialty, what I'm known for in the backyard. Honey peach goes really well on my ribs."

His friends' kids swap his sauce for ketchup with their chicken nuggets, and it even goes well on a barbecue chicken pizza. The sweetness isn't overbearing; it's a looser, flowing sauce with the right level of vinegary tang.

Kate Fullam, executive director of the East End Food Institute said, "When I first tasted the original sauce, I had an emotional response. It tastes like a recipe that my mom uses for barbecue leg-of-lamb that was my great-grandmother's recipe. That's what's so exciting. You know something is so good when you taste it and it reminds you of something from your childhood. I love local food for that reason — people take so much care in what they're making."

Mr. Wagenheim can't wait to fire up his brand-new Traeger grill this season as the Covid-19 pandemic eases up. There's a whole summer's worth of fun to recapture.

"It's very important to have passions," he said. "This has been a really nice, creative, entrepreneurial outlet -- helping keep balance at a time when it's otherwise tough to do so."

The sauce is available at South Fork outlets such as Citarella, Share the Harvest Farm, the Milk Pail, and Amber Waves.

RECIPE: Apple Cider Baby Back Ribs
Jason Wagenheim promises the tender rib meat will fall off the bone with this recipe for apple cider baby back ribs. "The method I prefer is called '3-2-1' because the ribs are first smoked over low heat for three hours, then wrapped in foil with liquid for two hours, then unwrapped, slathered in sauce and finished on the grill for one hour," he says. "It’s a foolproof method with very consistent results that's guaranteed to make you a backyard barbecue superhero this summer --just make sure you make enough!"

4 Racks of baby back ribs

Rub a thin layer of yellow mustard all over each side of the ribs. This serves as a nice binder for your rub. Generously season both sides of your ribs with the rub.

Fire up your smoker to a target temperature between 180 and 200 degrees. "I prefer applewood when I smoke pork, but use whatever wood you like or have on hand," Mr. Wagenheim writes. "If you don’t have a smoker, you can set up a charcoal grill or propane grill with a smoker box and use indirect heat."

Add seasoned ribs to your smoker, meaty side up. Close the hatch and let smoke for three hours. No peeking! "If you lookin', you ain’t cookin!"

While ribs are smoking, set up four large sheets of heavy duty aluminum foil on a large table, alongside a bowl of brown sugar, a bottle of apple cider, and honey.

After three hours, transfer all four racks quickly to a large baking sheet and close the lid on your smoker so you don’t lose heat. Bring the smoker up to 225 to 250 degrees while you prepare the wrap. Place one rack of ribs lengthwise across a sheet of foil. Sprinkle one quarter of the brown sugar on the ribs (both sides) and then drizzle both sides with one quarter of the honey. Fold up the edges of the foil a bit to make a "boat" for the ribs, and pour half a cup of apple cider over the ribs.

Carefully wrap ribs tightly in the foil to make an airtight seal. Pay attention to the bones and don't let them break the foil. If they do, don't panic -- just take a second sheet of foil and double wrap the ribs so they're airtight and no liquid can leak out. Repeat process for the remaining three racks.

Return wrapped ribs to smoker and braise for two hours.

Again, using a baking sheet and long tongs, carefully transfer ribs to a large table. Open foil packages (watch out for hot steam) and use tongs to place them back on the grill, meaty side up. They'll be falling off the bone, so handle with care! Discard the liquid and foil.

Slather ribs in East End Cowboy BBQ sauce and let them finish for another 45 minutes to an hour at 225 to 250 degrees. The ribs will tighten up nicely and the sauce will be sticky and set.

Note: While heavy duty foil is strongly preferred for the wrap, you can use regular aluminum foil. Just double or triple-wrap ribs if you do.