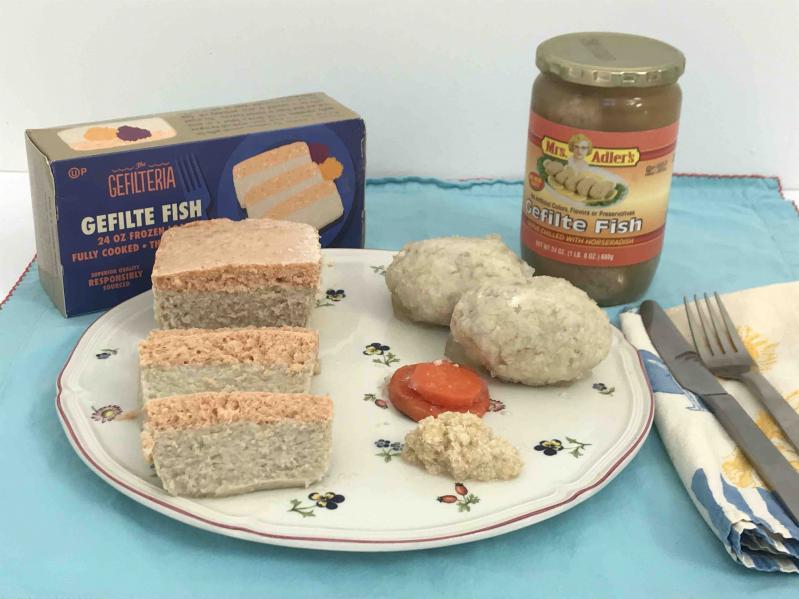 A gefilte fish terrine from the Gefilteria shares the plate with two traditionally shaped balls from Citarella. A supermarket-bought jar takes a back seat.
Mark Segal
By Mark Segal

Gefilte fish, the oval-shaped balls of ground fish most commonly associated with the Passover holiday, might resemble quenelles, the French comestible often linked with the cuisine of Lyon, but you won’t find gefilte fish in Escoffier’s “Le Guide Culinaire.”

Indeed, the jarred variety with which most people are familiar “seemed to have been fashioned, golem-like, from packing materials and crushed hope,” said Rebecca Flint Marx, a food writer, when describing the version from her Midwest childhood.

It was not always thus. When gefilte fish -- gefilte means “stuffed” in Yiddish -- emerged in medieval German-Jewish cookery, the flesh was removed from the bones, mixed with matzoh meal or bread and onions, seasoned, and stuffed into the skin, which was then sewn up and roasted.

By the 16th century, Ashkenazic cooks in Germany eliminated the stuffing step and instead poached the fish mixture in fish broth. “The result was a light, flavorful fish dumpling far different from the heavy, rather tasteless commercial kind prevalent today,” according to Gil Marks’s “Encyclopedia of Jewish Food.”

Like many ethnic foods, it emerged out of poverty and need. Traditionally, carp, pike, mullet, and whitefish were used, along with matzoh meal, onion, eggs, and seasonings. As Jews wandered the world, the product varied according to the location. In Poland, for example, gefilte fish is sweet because of an industry that emerged in that country in the early 19th century: sugar beets.

Shortly before World War II, several small manufacturers in the United States began producing commercial gefilte fish in cans, but the products had poor flavor and quality. In 1954, Manischewitz began making its own gefilte fish in jars, and before long other Jewish food producers, including Mrs. Adler’s and Rokeach, entered the field of mass production.

Millions of Americans were introduced to the dish on “The Goldbergs,” the first Jewish television sitcom, which ran from 1949 to 1956. A recipe appeared in the best-selling “Molly Goldberg Jewish Cookbook” in 1955. While gefilte fish became widely known, it remained a recognizably Jewish dish. As Ms. Marx put it, “It refused assimilation or window-dressing; it was straight out of the shtetl.”

In recent years, alternatives to the supermarket product have emerged on the East End. Carissa’s Bakery, Art of Eating Catering, and Citarella are among those offering it. Charlotte Sasso, the former co-owner with her husband, Bruce, of Stuart’s Seafood Market, made it “as a personal challenge and a labor of love.” She used pike, whitefish, and “a little bit of carp.” Now that the shop has been sold, gefiltephiles will have to look elsewhere.

Jeremy Blutstein, a private chef known for his commitment to local ingredients, has made it with porgy and tilefish. Cheryl Stair, the chef-owner of Art of Eating, began making it 20 years ago because Jewish clients asked her to cater seders. She uses carp, whiting, and pike.

Asked for a recipe, she said, “It’s mostly by feel. Not a lot of places make it themselves, and there’s a lot of tender loving care that goes into it here. The people that know about it know when it’s really good. And they order it.” When she asked older people how they make it, “Some would say you have to have two fish, some would say three.” Polish families she knew from the North Fork would insist on adding a little sugar. “It’s like marinara sauce -- everybody has their own thing.”

Speaking of Poland, Jeffrey Yoskowitz and Liz Alpern, both of whom have family roots in that country and grew up with the sweet version, are the Brooklyn-based proprietors of the Gefilteria, which they launched in 2012 with the purpose of reimagining eastern European Jewish cuisine.

Their artisanal gefilte fish, which has a touch of sweetness but not as much as that of their childhoods, is made with whitefish, pike, steelhead trout, salmon, Spanish onions, eggs, olive oil, sugar, salt and white pepper. The duo also conducts culinary workshops and has written an award-winning cookbook, “The Gefilte Manifesto.”

The Gefilteria’s website has the following recipe for a gefilte fish terrine, adapted for home cooks.

If there are any bones left in your fillets, remove the larger ones by hand, but don’t fret about the smaller ones since they’ll be pulverized in the food processor. You can buy your fish pre-ground from a fishmonger to ensure all the bones are removed, but try to cook your fish that day, since ground fish loses its freshness faster.

Preheat the oven to 350. Line an 8 x 3-inch loaf pan with parchment paper and fill the pan with the fish mixture. Smooth out with a spatula.

Place the loaf pan on a baking sheet on the middle rack of the oven and bake for 40 to 45 minutes. The terrine is finished when the corners and ends begin to brown. The loaf will give off some liquid. Cool to room temperature before removing from the pan and slicing. Serve with horseradish relish.