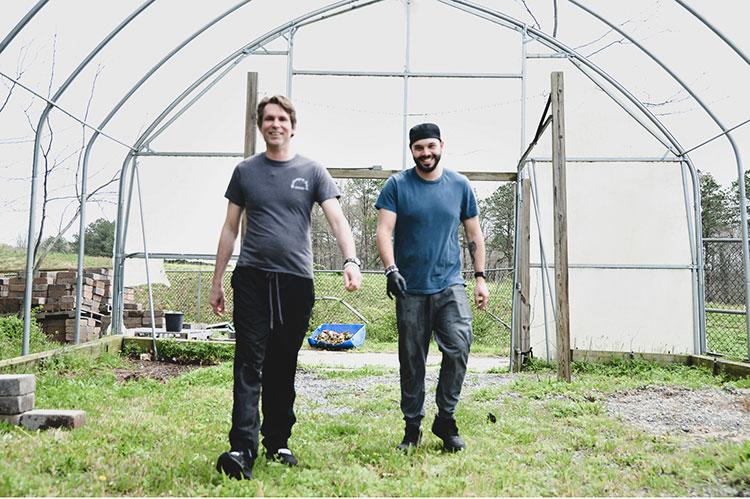 Jon Albrecht and Nick Reisini are the chefs behind the vegan-friendly and Whole30-compliant meals that help make up the menus for the Honest Plate meal service.
Alexis Rae
By Jennifer Landes

Anyone who has taken on a restrictive diet, whether plant-based, anti-inflammatory, keto, or something else, has likely wished for some help in the kitchen.

Specialized and limited ingredients are typically hard to find in the usual restaurant and takeout options available. That means a lot of home preparation, sometimes hours of it, just to get through the week and have something ready for breakfast and to take to work for lunch.
After a few January Whole30 cleanses -- where followers cut out things like sugar, alcohol, dairy, grains, and legumes for 30 days -- Ashley John Heather and his wife, Diana Dornan Heather, realized there might be a better way.

"We've been doing Whole30 for about six years," said Mr. Heather, who lives in Water Mill. "We were very busy with our work lives and really didn't have time to do all the meal prep."

Having a plant-based diet to begin with and entrepreneurial spirits (Mr. Heather is the founder of the Spur co-working space), they developed an idea for a meal service called Honest Plate that would cater to these needs.

To make their plans a reality they needed chefs, and found willing and enthusiastic partners in Jon Albrecht and Nick Reisini. "We were already working with Jon and Nick on some food-related things," including cooking classes at the Spur, Mr. Heather said.

Mr. Reisini, who lives in Sag Harbor and was a chef at Tutto Il Giorno there and executive chef at Dopo La Spiaggia in East Hampton, remembers they started in January last year with 20 friends, which grew into 30 people, for the entire month. When it was over, "we said let's keep on going with this and see how far we can take it."

About six weeks later, the Covid lockdown began. Yet they were able to continue. "Scarcity wasn't an issue for us . . . as chefs we knew how to source ingredients and where." Mr. Reisini said it allowed them to take care of people who didn't have access to that network.

Mr. Albrecht, who lives in Hampton Bays and has been executive chef at Tutto Il Giorno in Sag Harbor, among other restaurant and catering positions, said it was his job to "hand-pick all of the produce, the proteins, and the fish before it gets to the kitchen."  As a result, "I can tell people, 'I know it's organic, this is where I got it from.' "

Their commercial kitchen in Calverton has access to a garden where they grew peppers, Japanese eggplant, and tomatoes last summer. It provided them with about half of their supply of those items.

They have kept their focus on Whole30 principles as well as vegan and vegetarian meals. Mr. Albrecht became familiar with that style of cooking some 15 to 20 years ago, but it was new to Mr. Reisini. They work through a lot of trial and error to come up with stocks that taste like beef without any meat, or brownies that taste delicious without any wheat flour. "We never stop experimenting," Mr. Albrecht said.

Mr. Reisini said he was having fun learning. "It's really cool and interesting to take so much time and care in how things are produced and where they're sourced." They take pride in "how we're feeding our customers, taking care of the environment, and using local providers as much as we can."

Their menu has signature dishes that change monthly and a core menu of $13 items that changes every week. They also have menus for family-style and kids' meals and are working on nutritious dog treats. An additional $2 one-time stocking fee per item applies to new clients.

This week's offerings include grilled winter vegetables, Asian rice patties, eggplant and arugula salad, a bean and turmeric soup, and a vegetable chirashi bowl. The proteins, available for an additional $9, include chicken roulade, turkey meatloaf, seared tuna, and grilled salmon. Sides, which are $8 each, are a risotto salad, toasted farro, and white bean hummus. There are also desserts at $9 and smoothies from $6 to $9. Kids' meals come with main dish, side, and special drink for $9.

There is also a catering menu and a special weekly menu designed with David Burke, a star chef from New York City, of a couple of items. This week offers a zucchini and baby spinach soup ($11) and chicken a la king ($15), which sounds more like the homey decadent food Mr. Burke is known for and less like the healthier options that otherwise define the Honest Plate brand.

Another ethos they adopted from the beginning was no waste. This starts from using as much of their ingredients as possible, root to tip, like recycling the stalk ends of broccoli and other vegetable scraps for soup, and composting whatever they can't use. Their packaging is glass, which is returned, washed, and sterilized before using again, and sugarcane-based biodegradable materials for anything else.

"I grew up that way," Mr. Reisini said, "composting since as far back as I remember. My mother yelled at me for wasting food." He has a sister who works for a North Carolina zero-waste bulk business, and she also serves as an inspiration.

Mr. Albrecht shared that goal as well. "With 30 years in the service industry, working in hotels, I would see them throw out whole trays of food and thought, 'That's silly.' " After seeing documentaries and reading a lot on the subject of food waste, he realized he would rather be a leader in a new approach to waste.

The company also supplies meals to cancer patients and caregivers with the company's own donations and those of their clients through Fighting Chance, an area service organization addressing the needs of those diagnosed with cancer.

Their customer base, which has expanded past the East End to other parts of Long Island, has doubled in the past year to 60, plus a rotating group of six to 10 clients in Connecticut through a hub in Greenwich. The chefs said it was a mix of residents already here before the pandemic and some new full-timers. They rely on word of mouth and tend not to reject requests from people outside the East End who want to be part of their delivery route.

"As long as it is feasible with production time and the driver, we'll do it," Mr. Reisini said. If it's not going to work, they'll let them know that, too.

"We're super excited about where it's at," said Mr. Heather.