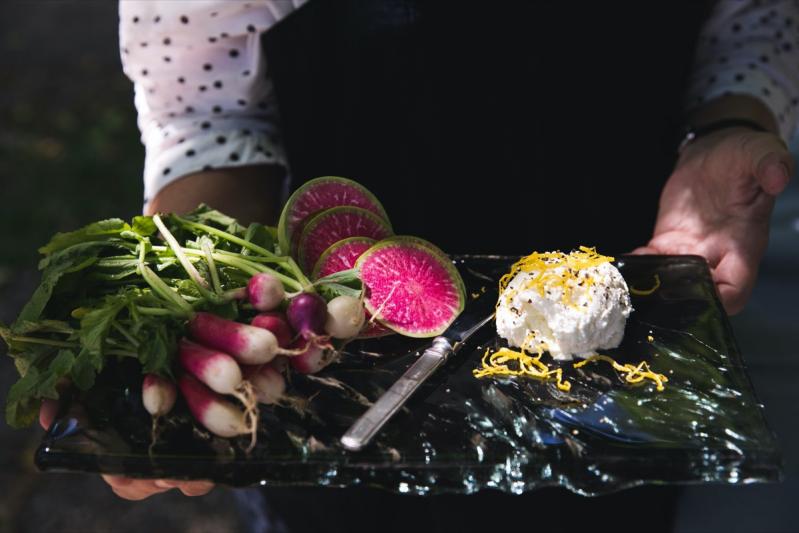 Loaves and Fishes sells the Goodale Farms goat cheese in its Sagaponack store.
By Jennifer Landes

Loaves and Fishes features Goodale Farm on the North Fork in its December cookbook, which highlights holiday food and entertaining.

Recipes incorporate the farm's products such as milk, cheese, eggs, beef, and pork. According to the cookbook, the Goodale family farm dates to the 19th century and remains very much a family business. Loaves and Fishes sells the farm's goat cheese in the store, where it is prepared with olive oil, black pepper, and lemon zest.

The book's recipes for potato pancakes and baked feta are shared below.

Peel potatoes, placing them immediately into a bowl of cold water. Line a large bowl with a clean dish towel and grate the potatoes into the towel. Wring potatoes in the dish bowl until they are dry. Place into a clean bowl and add the onion, egg, flour, salt, and pepper. Toss everything together until well combined.

Heat a large skillet with canola or vegetable oil until it reaches 350 degrees on a thermometer. Place a rounded tablespoon of the mixture into the oil, pressing down slightly. Continue until the pan is full, leaving about a half inch of space between each. Once the pancakes are golden brown on the bottom, about one minute, flip and cook another 30 seconds to a minute until golden brown on the second side. Remove and place on a paper-towel-lined tray and sprinkle with salt.

Right before serving, top each pancake with a dollop of dip and sprinkle with chives.

In a large skillet, heat butter and olive oil on medium heat. Add onions and salt, and cook for about 20 minutes, stirring occasionally, until onions are browned and caramelized. Cool completely. Add cooled onions to a bowl and fold in remaining ingredients.

Combine olives, tomatoes, one tablespoon of olive oil, red pepper flakes, orange peels, and thyme together in a mixing bowl. Pour olive mixture into an ovenproof dish, and place the block of feta on top. Drizzle on remaining oil and any liquid from the olive bowl.

Bake for 35 to 40 minutes, until feta is lightly golden brown and melty. Remove orange peels and serve with crostini, pita chips, or crudites.

Mashashimuet Park's History and Future
A Conference for Young People to Create Solutions
Get Outside, Get Moving
END_OF_DOCUMENT_TOKEN_TO_BE_REPLACED