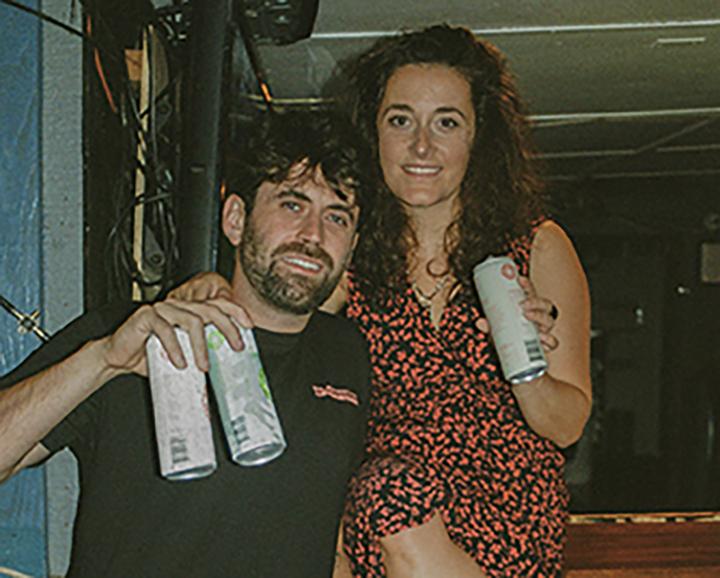 Ruby Honerkamp never wanted to work at the family business or start one of her own, "but two lefts make a right, I guess," she said last Thursday of her new line of canned cocktails called Talkhouse Encore, inspired by the sights, sounds, and spirits of Amagansett's Stephen Talkhouse.

A lot of "nevers" became "maybes" or even "yeses" in the past year or so as Covid created new and often bleak realities for businesses like bars and entertainment spaces, of which the Talkhouse is both.

After it was shut down during the pandemic, she and her brother, Max, would stop by on occasion to check on things. "I always thought the Talkhouse was an external place for me . . . . But once Covid hit, I realized how much of an internal place it was for me, too." Her father, Peter Honerkamp, is a longtime owner of the Talkhouse, and growing up, there were bar staff and bands crashing on couches in the house, an extension of the family. "I didn't realize how much of my DNA was built on the Talkhouse."

Just over a year ago, the family met to discuss what the future of the bar would look like, thinking about several questions: "Is it the four walls as it stands now? Is it a new location? Is there something else you could do to leverage this brand history and so many people's love for this institution, and how can you continue to support the community if something like a pandemic, god forbid, was going to happen again?" This was at a time when they didn't even know if they would be able to reopen this year, which they were able to do with reduced capacity and other restrictions.

She found that 10 years of working at startups in the city gave her the skills she needed to launch her own brand. "I asked everyone I knew if they had any contacts in the beverage space, in the operations space." She then found a consulting group that helped take her idea of canned cocktails to an actual product.

"We connected with an expert recipe developer and mixologist who knows how to perfect recipes. From there we were connected with different vendors and I became well versed in the supply chain." A year ago there was, and still is, a shortage of aluminum cans. Finding "line time" with packers was also challenging after their initial run, made in New York State, sold out faster than expected, requiring a second run in Michigan.

Even though what they ended up with was more like a licensing agreement to market these drinks under the Talkhouse brand, she had to give up her equity in the Talkhouse itself due to state liquor law requirements.

"The idea is the drinks are a brand extension that recreate what the Talkhouse does so magically on Main Street in a more national and potentially global sense, fostering music and intimate experiences, community and inclusivity in this world of entertainment and beyond," she said.

The drinks blend real liquor -- vodka or tequila -- with fruit juice and sparkling water with no added sugar. The flavors are Tequila Soda: Grapefruit, Tequila Soda: Blood Orange, Vodka Soda: Cranberry, and Vodka Soda: Lime. The vodka drinks are 100 calories per can and the tequila drinks are 110. Although the Talkhouse might be known for heavy pours, these drinks are an easygoing 5 percent alcohol by volume, the same amount as a can of Budweiser.

Ms. Honerkamp said the recipes were designed to taste like a cocktail you would get in a bar, but the best and most consistent version of it. "My idea was to streamline consistency in the diehard classics. I always make the joke that it has to be a drink that Phil Vega, one of our bartenders for 30 years, knows how to make."

The vodka cranberry soda has a remarkable freshness, considering it's a canned product. It drinks clean and flavorful with no sugary or metallic aftertaste. The tequila grapefruit soda tastes like a light paloma cocktail. Those who like the taste of tequila will find this a bit neutral, but it's refreshing and pleasant. The lime and blood orange flavors are also fresh and taste of real fruit -- not too much of it. Although the cans' portability works well for the beach, backyard, and the dance floor, Ms. Honerkamp said the drinks taste best poured over ice.

The initial rollout has relied on word of mouth and local liquor store distribution from Montauk to Southampton. The Sag Harbor Cinema is serving it, along with Rosie's and Main Street Tavern in Amagansett, Bostwick's in East Hampton, Manna in Southampton, and, of course, the Talkhouse itself. Talkhouse Encore is also starting to spread to other parts of Long Island and into the city. From there, the hope is to have it fan out through the metropolitan area and eventually follow East Enders in their winter travels to Florida and beyond.

They are taking it slow to measure the appetite for the product and see how it resonates with their followers, hoping to grow it into a profitable venture that will also support musicians and the arts.

"My dream is that this can be a platform for musicians, either working with established musicians and recreating their favorite cocktails and going on tour with them, or helping sponsor up-and-coming musicians' tours. I want to be a platform for the arts in the same way that the Talkhouse has been," she said.

"We never wanted to sell out the idea of the Talkhouse, so if it didn't work, it didn't work," she said. "But the outpouring of support has been beyond my wildest dreams."