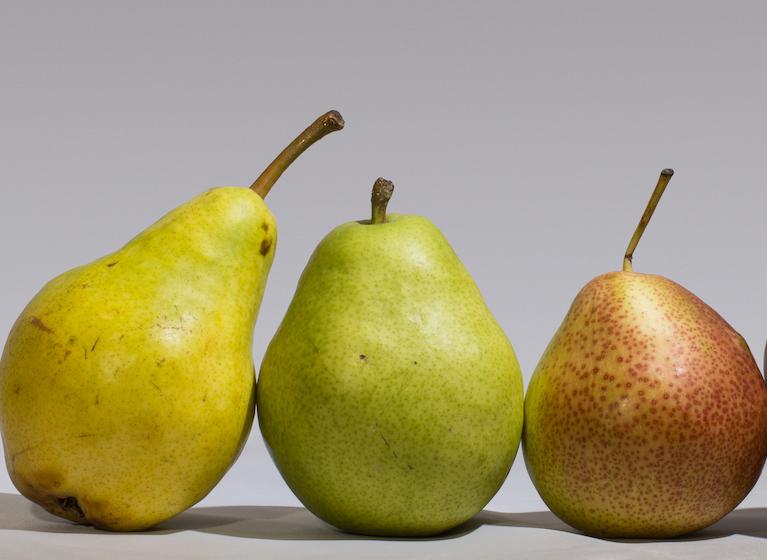 This is not pear country. Most of the United States' three-fourths of a billion-ton pear crop is grown on the West Coast where the climate and soil encourage the fruit and discourage the blight. The Bartlett pear was introduced into Massachusetts from England in the late 18th century by (yes!) Mr. Enoch Bartlett and comprises 70 percent of the nation's pear crop, a large part of which is sold fresh.

Now forget everything I've ever said about growers and wholesalers devising ways to pick and ship produce while it is still green and how this works to the advantage of everyone but the consumer. The pear is the exception.

Tree-ripened pears have a coarser texture than those picked before they are ripe. Furthermore, I wouldn't give you two cents for a pear picked ripe in Sacramento and then shipped to the Bronx terminal market and then to a local grocery store. Once a pear has ripened it goes fast.

When you buy pears, plan ahead. Buy the underripe ones (unless you need them immediately) which are less likely to have been battered around. Even swaddled in fancy papers, softening pears will not escape an occasional nick or two.

According to the Lake County (California) Fruit Exchange's fancy pear wrapper, "The truly delicious flavor of Bartletts is obtained only when they are fully ripe, i.e., when they approach a golden yellow and yield to gentle pressure. Highest quality and fastest ripening are secured when they are ripened in a cool (but not cold) place, preferably 65 to 70 degrees."

"Keep them together because Bartletts give off gases which aid each other in completing the ripening process. After ripening, Bartletts should be stored in the refrigerator for gradual use." There you have it.

The ancient Chinese used to ripen their pears in rooms full of burning incense. Maybe they knew something we don't despite the friendly Bartlett gas exchange. (Asian pears are the thicker-skinned, coarser textured varieties, like the Seckel pear. Some Asian pears are actually called "sand pears.")

Bartletts also give off calories at the rate of about 100 per pear as well as small amounts of other food elements. Their main attribute is taste and those in the local stores are succulent.

At some supermarkets, you may find Bartlett pears for as low as 29 cents per pound. Most groceries have them for 39 to 49 cents per pound or 15 to 20 cents per pear. The Farmers Market has some local Bartletts for 35 cents a pound, but their price for the Western ones is competitive. (A local pear, "Clapp's favorite," slightly crunchy but very juicy, is sold at the stand in the wagon just west of Water Mill, 29 cents a pound.)

Good Bartlett pears are delicious plain, or perhaps served with some cheese. The ice cream/chocolate sauce concoctions to which pears are commonly subjected I regard as travesty. If you do want to fuss with pears, some red wine will do the trick.

Peel and cut up some excellent pears and let them marinate for a few hours in the refrigerator in a mixture of honey and wine. A tablespoon of honey mixed into one-half cup of red wine should do for four pears. Serve in stemmed goblets.

Combine the above ingredients and simmer about 15 minutes in an enamel, glass, or stainless steel saucepan. Serve warm or cold, with much of the wine drained off, with the following sauce:

Combine four egg yolks with one-third cup sugar in the top of a double boiler. Scald two cups of milk, then slowly pour milk into egg mixture and cook over boiling water, stirring constantly, until thickened. Add one teaspoon vanilla and spoon sauce (either warm or chilled) over pears poached in wine. Serves four.