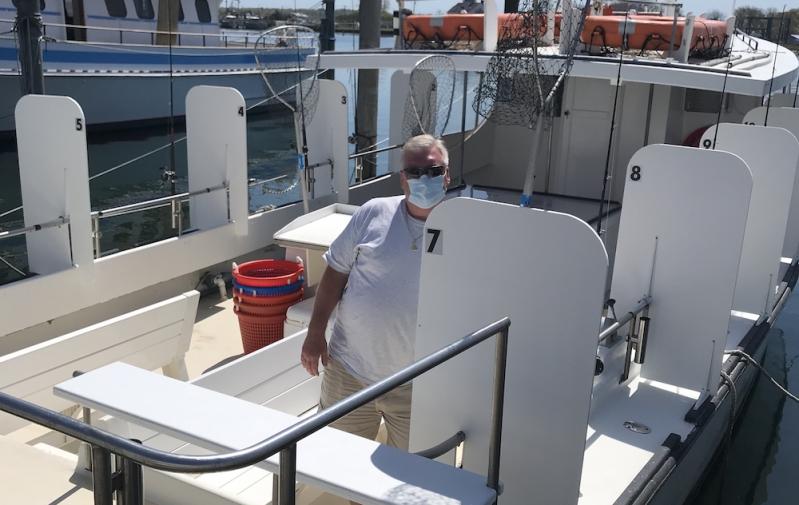 Patience is a virtue when it comes to fishing. But charter and party boat captains in Montauk were getting anxious as Covid-19 kept them tied to the dock. Like waiting for a fish to take a baited hook, all are keen to get back to their livelihood and take paying fares out for a day on the water. Given that these businesses are included in Long Island’s phase one reopening, which began yesterday, the wait is over.

While neighboring states like New Jersey and Connecticut recently eased restrictions to allow such boats to leave the dock, albeit with a multitude of social distancing, sanitizing, and health mandates, the large fleet of for-hire craft in Montauk has also made its share of changes and upgrades before untying the dock lines.

“We are ready to go fishing,” said Capt. Michael Vegessi of the Lazybones, a Montauk party boat. Vegessi has prepped his 55-foot Bruno craft with red tape affixed to the railings every six feet in accordance with social distance protocols. Hand sanitizer and disinfectant wipes will also be available on board. Masks, too, will need to worn by everyone on all boats.

“We have taken and will follow all of the necessary C.D.C. precautions as mandated,” he said. “We want people to feel safe at all times.”

Rather than sailing with upward of 35 fares for fluke, the new space requirements will reduce his sailing capacity to a maximum of 16. As such, Vegessi and other party boat captains may adjust the price of a trip to help offset the reduction in income.

“We are in a new world right now,” he said. “Hopefully the restrictions will ease over time and we will adjust accordingly.”

Capt. Scott Schafer of the charter boat Sea Spray has taken a few extra precautions to keep his fares safe by building and installing composite plastic partitions every six feet along the rails, along with bottles of hand sanitizer, towels, and bait buckets positioned at each station. He also has installed an ultraviolet light in the head to go along with a new ventilation system.

“I wanted to make my boat as safe as possible for people,” said Schafer. Captain Schafer has also reduced the maximum number allowed to fish on his 51-foot boat from upward of 30 fares to 12.

“People are skittish and that’s completely understandable,” said Schafer, who also builds custom cabinets. “But they are anxious to get back on the water and get a better feeling of normalcy. I know I can’t wait to get back fishing.”

As for the fishing scene itself, Montauk continues to see consistent action on striped bass and bluefish.

“It’s been really good on diamond jigs at the Elbow,” said Vegessi of a spot located about a mile east of the Lighthouse. Fluke will be the quarry of choice when he starts the season. The Bones sets sail at 8 a.m. and 1 p.m. daily and reservations are required.

In a sign of the times, another popular fishing tournament has bitten the dust. The Montauk Mercury Grand Slam tourney, which was slated to be held in mid-July, has been canceled due to the virus.

“Those big bluefish are still being caught at Gerard Drive, Napeague, Lazy Point, and other areas,” reported Harvey Bennett at the Tackle Shop in Amagansett, who added that he has sold an inordinate number of top water poppers, the current lure of choice for the toothy choppers.

As a reminder, with the recent influx of bluefish, the new recreational possession limits are now three fish for private vessel and shore-based anglers, and five fish for anglers fishing from for-hire vessels. There is no restriction on minimum size or season.

“Porgy and blowfish are also being caught in nice quantities, while striped bass are good off the ocean beaches,” added Bennett.

“The bluefish have moved in big time,” said Ken Morse, the proprietor of Tight Lines Tackle in Sag Harbor. “I’ve seen them up to 19 pounds, which is scary big for sure. Porgy fishing remains excellent with lots of big fish, and we started to see more weakfish finally showing up with fish up to four pounds landed.”

Morse added that the Shinnecock Canal is loaded with blowfish, but that he has not heard any local reports yet. “I’m not sure why that is, but I have to think they are there at Long Beach right now,” he said.

As for striped bass, Morse said that reports were a little scarce of late, but that some large bass over 40 inches have been landed locally. Note that anglers are allowed to retain one bass between 28 and 35 inches this season. Larger fish need to be returned to the water safely.