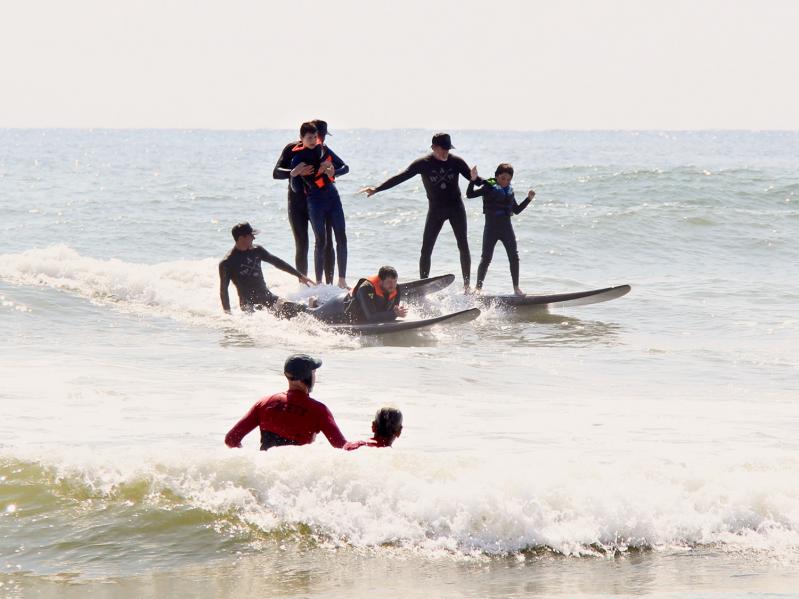 At A Walk on Water's event in Montauk, children beamed and shouted, and parents and onlookers stood at the edge of the ocean cheering on the kids as they rode the waves in tandem with a surf instructor.
Durell Godfrey
By Tom Gogola

The surfing conditions were pretty sporty Saturday at Ditch Plain but that didn’t stop organizers of A Walk on Water in their mission to give special needs children a healing encounter with Montauk waters. Co-founded by the Malibu surf pro Steven Lippman 10 years ago, AWOW has been coming to Montauk for seven years for a two-day event where everybody gets a neat wooden trophy in the shape of a surfboard.

It was quite a scene Saturday morning as the jam-packed beach was filled with a volunteer army of surfers, lifeguards, and event sponsors, which included the lead sponsor John Paul Mitchell Systems. Dogs romped, lunches were served, children beamed and shouted, and parents and onlookers stood at the edge of the ocean cheering on the kids as they rode the waves in tandem with a surf instructor. Some were “huggers,” who held tight to their boards, and others stood on the specially designed surfboards in the heaving Montauk surf. Participants included children with Down syndrome and kids who have been diagnosed as being somewhere on the autism spectrum, among others.

“Today is an amazing day,” Mr. Lippman said following the awards ceremony. “We had incredible waves — it seems like we get a hurricane swell every time we come to Montauk.” Owing to the surf conditions, organizers enlisted local lifeguards on watercraft to assist in towing the children and volunteer surf instructors to the waves.

Mr. Lippman, whose sea-and-sun-hewn hands were tattooed with images of an anchor and a compass rose, said he started the event out of a sense of commitment to helping special needs kids access the therapeutic wonders of the waves. Plus, he has no tolerance for bullies and also makes it a priority to educate children who don’t have special needs to treat those who do with respect.

“We teach kids — don’t judge a book by its cover. A lot of these kids are bullied, made fun of — that’s fucked. For me, I have zero tolerance for bullying and we teach them to stand up for the special needs kids, play with them, that sort of thing.”

Mr. Lippman has been working with these kids for 17 years. “It’s surf therapy, ocean therapy, water therapy,” he said. “It’s all about creating an experience that they can go home with and remember and always want to do again — through developing a bond of trust with our surf instructors. It’s not about us at all but about the children, who we call ‘athletes.’ “

Mr. Lippman said he has seen some children grow up into teenagers through AWOW’s 10 years and while the 501(c)(3) nonprofit isn’t teaching them how to surf, some have taken an interest in it, “and that’s great, but it’s not like this is a surfing school — it really is all about the surf therapy,” said Mr. Lippman. There have been too many memorable moments to pick just one, he said, but did note that “We’ve had children speak for the first time — that is very humbling.”

The therapy is much needed as it has been a tough and cruel time generally for special needs children as they have faced bullying, or worse, not just from other children but from adults in law enforcement, school administration, and government.

Last week, a California high school principal was charged with misdemeanor assault after the Fresno man shoved an autistic child to the ground because the child had pointed his finger at the administrator. Florida Representative Matt Gaetz was in the news, too, last week, after he used a photo of his Democratic opponent’s 12-year-old son sitting with his face down at a table in a campaign ad, sparking an incensed rebuke from Rebekah Jones for mocking her autistic child.

Closer to home, the trial of disgraced and former New York City police officer Michael Valva is getting underway after Mr. Valva allegedly left his 8-year-old son, Thomas, overnight in a freezing-cold Center Moriches garage in 2020, reportedly because of the boy’s behavioral issues. The boy froze to death. Mr. Valva and his now-ex-fiancée who lived with him, Angela Pollina, were both charged in the boy’s death.

Those episodes highlight the value of events like the AWOW one in Montauk to both parents and kids, where special needs children are embraced in a cocoon of love, care, and warm white sand, while their parents can sit back and enjoy the moment.

Agatha Wallen and her husband have two boys on the autism spectrum, Mason and Taylor, and have been involved with AWOW for nine years. She stood on the Ditch Plain beach Saturday with her clipboard and a black volunteer jacket from John Paul Mitchell Systems. “The first time we came, our kids went out surfing — this event is like no other we’ve been to and we’ve fallen in love with it,” said Ms. Wallen, who hails from Southern California and now lives in Syracuse. Mason had surfed that morning with Mr. Lippman, known affectionately as Lippie to the youth.

Ms. Wallen was especially grateful for the surf instructors who are “always on point at figuring out and communicating with the parents, and I’ll tell you this about that first time: I went with a good friend of mine who also has two kids who are disabled, and we both sat on the beach as we watched our kids go out and we literally fell into tears. This was the first time — it was the most peaceful moment we’ve ever had. The kids are work, but it was nice because we knew the kids were safe, that people were taking care of them. So our work here is not just for the kids, but we want the parents to have that feeling — we’re always trying to recreate that feeling that everyone is going to have a good day, a family day.”

As the event wound down early Saturday afternoon, a woman walked off the beach pulling a colorful and patriotic cart loaded down with beach gear and swag from the event, while her autistic son rinsed off at the nearby comfort station. “Call me Luke’s Mom,” said the woman, who had come from Patchogue with Luke and a friend of his. Luke’s mom said she really appreciated the volunteer spirit during the event, and that the kids got free towels, too. “It’s wonderful how people are so giving of their time,” she said.

She and Luke were out here last year and she said with a laugh that her son was a board-hugger, but that his friend was earlier able to stand up on a therapy board for over a minute.

And you just can’t beat the nature in Montauk, Luke’s mom said, as she trundled off to her car, beaming in the sun and the salty breeze with her son close behind.