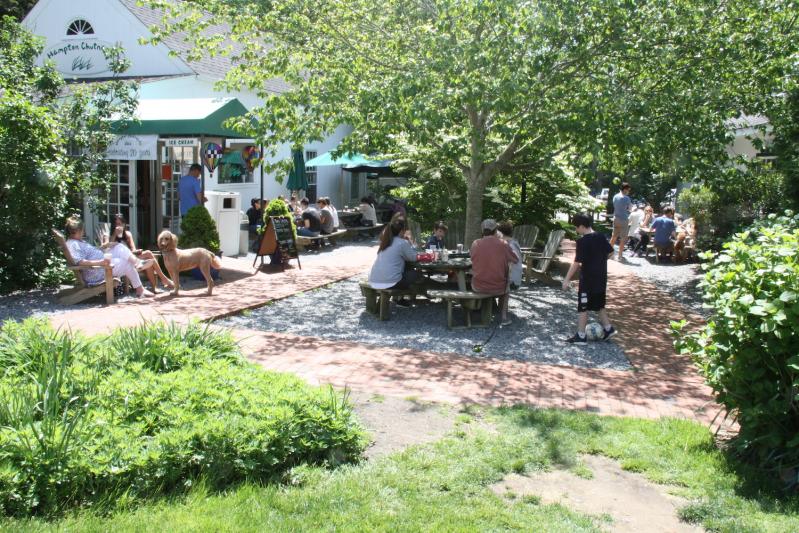 Hampton Chutney, bustling pre-pandemic. "We believe we have brought crowds to the square, and the other tenants profit from that," said Isabel MacGurn, an owner of the eatery.
Durell Godfrey
By Jamie Bufalino

Facing a steep rent increase, the Hampton Chutney Co. eatery will soon be leaving the Amagansett Square space it has occupied for more than 20 years, Isabel MacGurn, an owner, said on Monday.

The lease for the property had been up in October 2020, but, because of the pandemic, Randy Lerner, the owner of the complex, agreed to postpone a rent hike for a year, Ms. MacGurn said. Earlier this spring, Fred Friedler, the property manager, informed her of the new rent, and "it was almost triple what we're paying now," she said. "We were shocked, horrified. I have a New York City restaurant, and these are New York City level rents they're charging."

Ms. MacGurn and her husband, Gary, started selling chutneys to South Fork gourmet shops in 1995, and two years later, they opened their first dosa shop in the space that is now home to La Fondita. They moved to Amagansett Square before Mr. Lerner owned it, when it was filled with chains such as the Izod and Van Heusen clothing stores. "Basically nothing was happening in the square," she recalled. "I do think Randy Lerner made a lot of improvements, and we've been very happy being here, but we also believe we have brought crowds to the square, and the other tenants profit from that."

"When Randy came here, he made it clear that he cared about the community, and the mom-and-pop businesses, and he wanted unique places, not chain stores," said Ms. MacGurn, who sought to discuss the rent hike directly with Mr. Lerner. "Our kids went to the Amagansett School, and we've always had a nice relationship, so I reached out to him, but I didn't get a response unfortunately. They already have other plans for the space, so I don't think that even if we paid what they're asking they would have us," Ms. MacGurn said.

"We have had several attractive tenant-opportunities in the works that we feel would enhance our community's diversified group of shops at the square," Mr. Friedler said in an email. "Our priority currently is to take time to clean up and upgrade the building that Hampton Chutney occupied, as it is the one structure that has fallen behind literally from foundation to roof-ridge."

Ms. MacGurn said that no one had ever discussed the need for renovations with her. "The foundation is fine, the windows were all replaced last fall, and the roof was replaced with all the other buildings a few years ago," she said. "Given the amount they are asking us to pay, I think they didn't imagine that we would ever say yes because it's a ridiculous amount of money. The fact that they don't want us here has given us a such a bad feeling, that we don't want to be here anymore."

She is now hoping to find a new place nearby, and has a prospect in mind. "We're trying to stay in Amagansett but it will likely be East Hampton," she said. "We're spreading the word about leaving mostly because we're hoping that somebody might say, 'Hey, I have an availability.' "

Ms. McGurn has recently started telling customers about the restaurant's departure, and the reaction has been heartwarming. "This community has really rallied around us," she said. "We keep encountering people who love Hampton Chutney so much and are willing to do whatever they can to help us in any way they can."