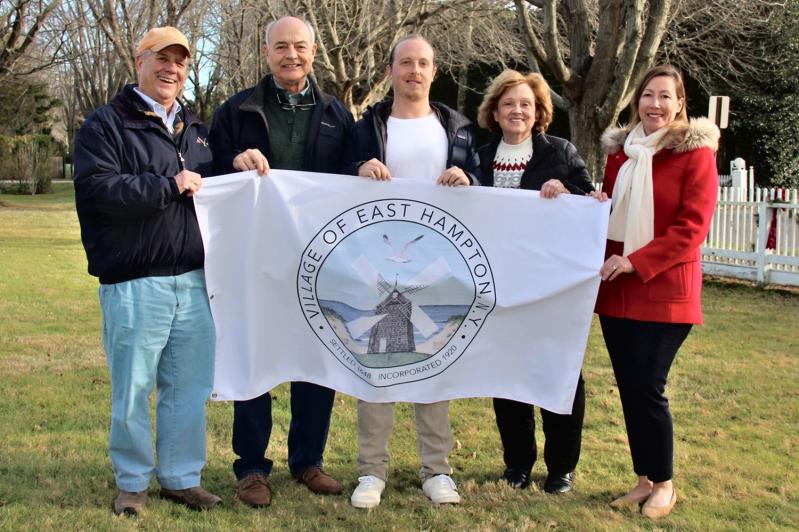 A new seal for East Hampton Village, created to mark the 100th anniversary of the village’s incorporation, was unveiled at the village board meeting last Thursday.

It features Hook Mill at its center, the village green in the foreground, and the ocean in back.

“It’s a beautiful piece of artwork,” said Barbara Borsack, a board member and the chairwoman of the centennial celebration committee, who commissioned it from Scott Bluedorn, a mixed-media artist who lives in Springs and grew up on Lee Avenue in the village.

Later that afternoon, a flag bearing the seal was hoisted onto the pole at Village Hall.

“This is the opening salvo for the centennial celebration,” said Richard Law­ler, the deputy mayor. The village is planning a series of events this year to celebrate the village’s formation in 1920. Presentations on the history of the village and the town will be held, schools will incorporate lessons about the 1920s into their curriculums, and a time capsule will be buried. The celebration will culminate with a parade and other festivities on Sept. 26.

Mr. Bluedorn, who attended the flag raising, said he liked the idea of using the windmill’s blades as the focal point of the logo. “The X shape makes a nice seal,” he said, and the seagull that hovers above Hook Mill is intended to evoke a sense of place. “It’s a totemic animal. I think of ospreys for the Springs and the bays, but seagulls remind people of the village.”

The work is “an old-school pen-and-ink drawing,” he said, which he manipulated digitally, adding color and the text: “Village of East Hampton, Settled 1648, Incorporated 1920.”

This is the first time he has been asked to create something so official, Mr. Bluedorn said. “It’s definitely an honor.”