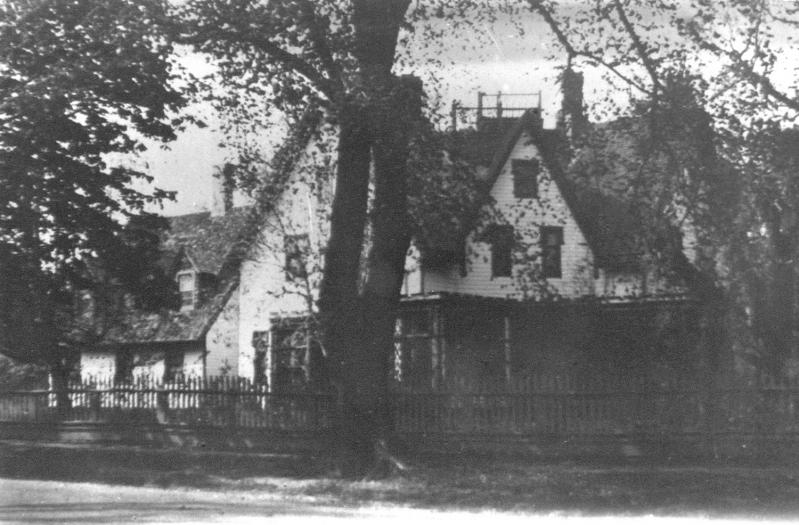 If you’re a fan of the American author Nathaniel Hawthorne, it may interest you to know that a house known as Seven Gables once stood on the corner of Main Street and Buell Lane next to what would later become the East Hampton Library. While Hawthorne’s “The House of the Seven Gables” focuses on themes of greed, love, curses, obsession, and murder within a creepy New England manse, the history of East Hampton’s Seven Gables is, thankfully, less ominous.While many have lived at the corner property through the years, its most well-known resident was the Rev. Samuel Buell, who took ownership in 1746 when he was ordained as the third pastor of the East Hampton Presbyterian Church. By the 1850s, the property belonged to Timothy Hedges, whose house was supposedly modeled after one he had seen in England, with two and a half stories and five gables. After his death, the house belonged to various relatives, including his sister, Esther, and later his daughters, Mary Conger and Catharine Hedges.In 1894, the house was sold to the family of Henry C. Stimson and Julia Atterbury Stimson of New Jersey, who had been summer boarders here since 1879. They had previously rented the house for six years before ultimately buying and remodeling it for use as a summer cottage. According to The East Hampton Star that year, the house was painted, a hedge was planted, trees were removed, and an elevator was installed.Henry C. Stimson died shortly after the purchase, on Nov. 20, 1894, at the age of 82. His wife, Julia, died there in 1908, and ownership of the house was transferred to their daughter Mary Atterbury Stimson, who died 20 years later. The house then went to her sister, Catherine Boudinot Stimson Weston. Catherine’s husband, Theodore, was an architect who remodeled the house, adding two additional gables and naming it Seven Gables.Catherine died in 1942 at the age of 97, and the property was subsequently purchased by the Osborne family, who had the house torn down and donated the land to the East Hampton Library for future expansion.—Gina Piastuck is the department head of the East Hampton Library’s Long Island Collection.