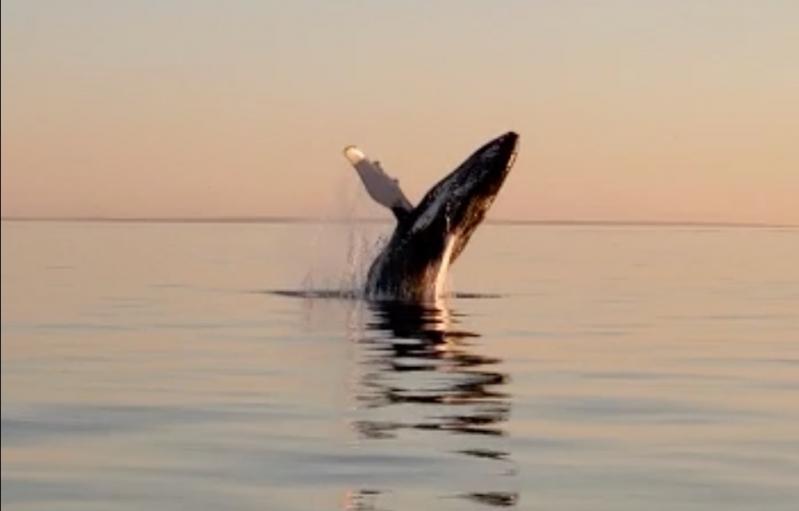 A still from one of the videos Aidan McCormack made while tracking a humpback whale in Gardiner's Bay Monday.
Aidan McCormack
By Carissa Katz

Their fishing trip in Gardiner's Bay on Monday may not have yielded the blackfish they were after, but Aidan McCormack and Mark Deckman came away with quite a tale to tell.

The two friends had been on the hunt for the famously elusive blackfish aboard Mr. McCormack's 17-foot Boston Whaler, Osprey. They'd just come through Plum Gut on their way to the Plum Island rocks when they spotted something very large about a mile off. The water was clearer than Mr. McCormack had ever seen it and smooth as glass, so it was hard to miss "all the water movement" in the distance, the clear signs of a whale, but in a most unexpected location.

They watched it breach and began to track it. As they approached, they cut the engine "and just drifted." Then "all of a sudden, we heard the breath." A humpback whale far larger than their small boat breached and then flipped high out of the water. Even in the thrill of the moment, one of them had thought to start shooting video on his phone. "I was absolutely frightened out of my lights," Mr. McCormack said Thursday. "She was close enough to scare the pants off us."

"There she blows! In Gardiner's Bay, look at this!" Mr. McCormack can be heard saying as he films.

"I got goosebumps," his friend says.

"Goosebumps, let's hope you don't get a whale in your face!" he says laughing.

As you watch the video, their giddy joy is infectious, and you can't help but smile along with them.

"I've been on the bay my whole life and I've never seen anything like that," said Mr. McCormack, whose family bought a house in East Hampton's Northwest Woods in 1968. He and Mr. Deckman, friends for 20 years and lawyers at the same firm, had needed a break from the worries of the day, and, boy, did they get it! They followed the whale for an hour.

"I think the whale knew we were tracking it," Mr. McCormack said. "It did that waving thing, and then she was flapping her fins in the water to make kind of a sound, and then it gave this wave, like, 'fun playing with you guys.' " And off it went.

It was a once-in-a-lifetime experience, he said, and a beautiful reminder that "there's something else out there besides Covid-19."