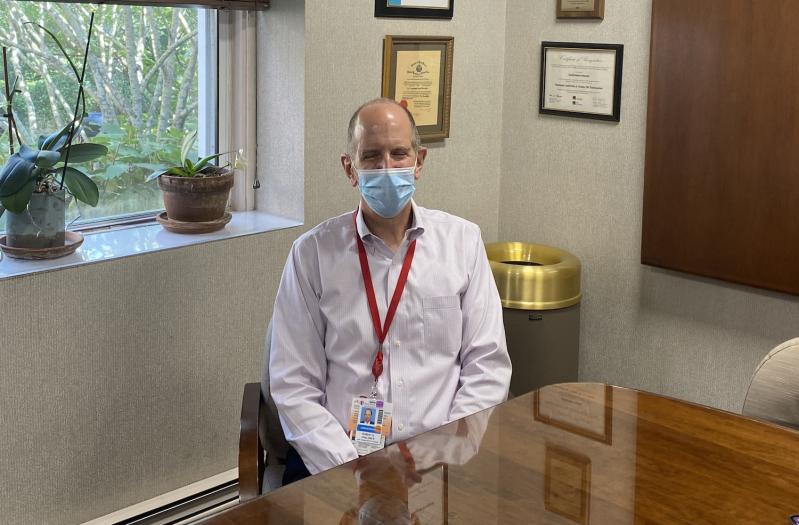 "After a long time of planning and dreaming about this, I think we're close to making it a reality," Robert Chaloner, Stony Brook Southampton Hospital's chief administrative officer, said of the proposed emergency room annex in East Hampton.
Jamie Bufalino
By Jamie Bufalino

Stony Brook Southampton Hospital remains convinced that a 4.5-acre parcel on Pantigo Place in East Hampton is the most appropriate site for its proposed emergency room annex, and it hopes to break ground on the project by the end of the year, according to Robert Chaloner, the hospital's chief administrative officer.

The hospital is seeking site plan approval from the East Hampton Town Planning Board for a nearly 22,000-square-foot facility at 400 Pantigo Place, a parcel that now contains two Little League baseball fields. It will be a 911-receiving facility serviced by local emergency medical service teams, operate 24 hours a day, seven days a week, and serve as a place to assess, diagnose, and stabilize patients.

In 2016, the town board designated the site as a preferred location for an emergency room, and last September the board decided the project would have no adverse environmental impact and approved changing the parcel's zoning from parks and recreation to commercial-industrial.

Pantigo Place is a heavily-trafficked road off Montauk Highway on which the East Hampton Healthcare Foundation medical facility, an office building that houses several town departments, and a shopping plaza that includes a branch of Goldberg's Bagels, are located.

During the planning board's most recent review of the proposal, members were particularly concerned about the impact the emergency room annex would have on traffic. Eric Schantz, a senior planner, shared the results of a 2020 traffic study that found that the facility would create long delays for drivers turning onto Montauk Highway from Pantigo Place. In existing conditions, a driver seeking to make a left turn from Pantigo Place has to wait an average of 97.6 seconds in the morning, 242.3 seconds in the afternoon, and 520 seconds on Saturdays, according to the study. Once the facility is built, the average wait time would increase to 195.7 seconds, 470.9 seconds, and 861.6 seconds, respectively. For right turns, the wait would increase from 34.3 to 49.3 seconds in the morning, 55.5 to 124.7 seconds in the afternoon, and 144.5 to 260.3 seconds on Saturdays.

"Every site is going to have a traffic issue," Mr. Chaloner said in an interview last week. The hospital had looked at multiple sites for the emergency facility, he said, and ultimately narrowed the search to two feasible options, 400 Pantigo Place and 110 Stephen Hand's Path in Wainscott, the site of the East Hampton Town Center for Humanity, which the town has been using as a Covid-19 vaccination center.

"I commute on that road every day, and there are things that scare me about it for a health facility," Mr. Chaloner, a Northwest resident, said of Stephen Hand's Path. It is highly trafficked, it has a section with a train trestle that is too narrow to allow for two-way traffic, and, where it intersects with Route 114 it is prone to flooding, he said. On Pantigo Place, the emergency department would be next to the East Hampton Healthcare Foundation medical facility, whereas at the Stephen Hand's Path site it "would totally be on its lonesome. Why spread health care over two sites, when you can contain it in one location?"

One of the main goals of the annex would be to reduce the amount of travel time it takes ambulances to transport residents of the town's easternmost hamlets to an emergency room, and, in that regard, the Pantigo Place parcel is preferable, he said, because an ambulance would have to contend with far more westbound traffic to reach Stephen Hand's Path.

Mr. Chaloner said the facility's overall impact on traffic on Pantigo Place is not likely to be that great, particularly compared to the "Sunday morning rush for bagels" at Goldberg's. "Our facility is not going to have hordes of people going in and out at any given time," he said.

After initially proposing to build a helipad for medical evacuation on the nearby Town Hall property at 159 Pantigo Road, the hospital has since proposed using open space on the emergency department's grounds. Ian Calder-Piedmonte, a planning board member, said a helipad could be a lifesaving feature, and asked the hospital to explore whether one could be built on the building's roof. Making that change would drastically alter the design of the building, and eliminate the possibility of having solar panels on the roof, Mr. Chaloner said. "We're trying to green the space as much as possible, and you'd lose so much in terms of the character of the building, the environment, and the cost."

Stony Brook Southampton Hospital uses its grounds for helicopter landings, he noted, and the need for that type of medical transport is rare. In 2020, a Suffolk County Police Department helicopter transported two patients to the hospital, and two from it, according to the hospital. "We're seeing 25,000 people here, and we're anticipating 8,000 people [at the emergency room annex], so it's going to be a much smaller number," he said.

"Most very very sick people that need to be transported are better off in an ambulance because you have the space to work around them. We can put a nurse, and a doctor, and an emergency medical tech in an ambulance, you can't do that in a helicopter." The annex will have an ambulance on site when a patient needs to be transferred to a different facility. "Remember, you have to call for a helicopter, it has to come from wherever it is, it's got to land, and you have to take the patient in and out," he said. "You probably could have traveled half the distance by ambulance at that point."

Another concern raised by the planning board was the possibility that the facility would expand to include health services beyond emergency care.

"The mission of the building is to provide emergency services and that's all the building is being built for," Mr. Chaloner said. "From a regulatory perspective, I can't start sticking other things in there."

Randy Parsons, a planning board member, questioned whether the facility would truly need 56 parking spaces (41 for visitors, 15 for employees), particularly during the winter months. "I don't want sick people to struggle to find a place to park when they're trying to get in there, so I would be an advocate for not cutting parking back to the bone," said Mr. Chaloner, who noted that there are about 70 parking spaces for the existing ball fields.

The annex is not expected to be a lucrative endeavor. "Emergency services generally don't make money," he said. "We're like every other business out here, we make money during the summer months, and lose money during the winter months. In a good year [at Stony Brook Southampton Hospital], we come close to breaking even, that's why we do our annual summer fund-raising party." The hospital intends to hold similar fund-raising events for the annex.

The facility is expected to cost $38 million to build, and the hospital has raised all but $6 million of that. "I'm very confident we're going to raise the rest of the money we need by the end of this year," Mr. Chaloner said.

The town's architectural review board has already expressed its support for the project, and he's hopeful the planning board will follow suit. Once the approvals are in place, "I would like to break ground by the end of this year," he said. He estimated that the facility would take about a year to build. If all goes according to plan, "we'll open certainly by the summer of 2023 if not sooner," he said.