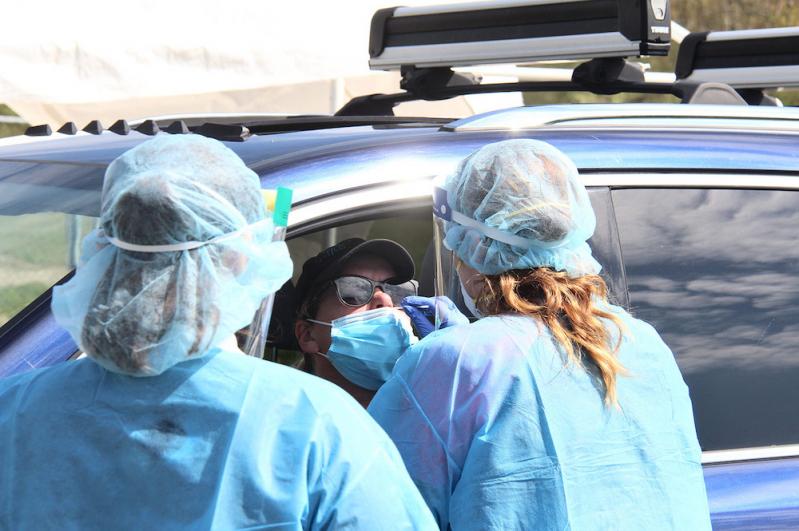 In mid-April, at the height of the Covid-19 pandemic, Suffolk County was reporting more than 1,000 new cases per day, but on Tuesday reported just 46 new cases. As the infection rate has slowed here, people concerned that they have been exposed to the virus are more likely to be tested at an outpatient lab, clinic, or doctor's office than at a drive-through test site, and the cost for testing can vary.

According to state guidelines, testing at a site operated by New York State is free. One of these is the drive-through testing site at 2 Campus Lane at Stony Brook University.

"An average of approximately 300 tests are being conducted each day in Stony Brook, however on some days, more than 400 people have received tests," said Evan Frost, a spokesman for the State Health Department.

The site remains open and is free for the general public. When testing sites move into the jurisdiction of local governments and individual health care practitioners, that may not be the case.

So long as the test is prescribed by a doctor, the CARES Act stipulates that New York insurance policies cover the test with no deductible, copayment, or coinsurance for diagnosis. Barbara Jo Howard, director of communications and marketing at Stony Brook Southampton Hospital, spoke to non-state-funded testing in an email. The hospital provides Covid-19 testing at its outpatient labs in Hampton Bays and Amagansett. The cost is $125 and 8.2 percent of those tested, including at the emergency department and hospital admissions, "are self-pay," she said.

The temporary testing site in the parking lots by the playing fields on Pantigo Place in East Hampton, operated by the East Hampton Healthcare Foundation and Hudson River Health Care, saw its last patients for swab testing on June 17 and has since closed. Sheila Rogers, the director of the East Hampton Healthcare Foundation, explained that if someone did not have insurance, the foundation paid for their test. "I've heard numbers like $50 and I've heard $100," she said in reference to the cost per test. Ms. Rogers had yet to receive the bill from Hudson River Health Care, which provided technicians and staffing to the site, but she said that everyone who came for a test had been covered.

Northwell Health, which operates the urgent care clinic at the Bridgehampton Commons, does not require prescriptions for its tests. Joe Westphal, a medical assistant, explained the clinic's online booking system that allows patients to provide necessary information regarding medical history and insurance prior to the appointment, so the only thing to do in person is the test itself. On Monday, Mr. Westphal said, "if you went online today and tried to book you'd probably get a time slot for Thursday."

Of the 40 or more tests the clinic does in a day, Mr. Westphal estimated that one or two were usually self-pay. For the uninsured, the set charge for a visit at the Northwell urgent care clinic is $120, and with the swab or antibody test, the total charge is around $150. In addition, uninsured patients receive a lab bill, though the clinic is not involved in that aspect of billing and could not provide the amount. No one reached at Abbott Laboratories, the lab that Northwell urgent care uses, was able to speak to the billing process.

Ms. Rogers said the turnaround time for test results at East Hampton Healthcare Foundation's now-closed test site ranged from two to four days, but in some cases was one day and in others much longer. Two patients reported being tested on June 10 and results not received until June 23. High call volume and backed up lab tests have been reported at many clinics and sites.

Luxury medical services like Hamptons Boutique Medicine operate in a completely different sphere, bypassing wait times and waiting rooms altogether. Dr. Asma Rashid, who was a primary care doctor for Southampton Stony Brook Hospital, a hospitalist for Northwell Peconic Bay Medical Center, and managed urgent care facilities for more than a decade, founded the practice to provide a "service tailored to the patient's needs, a physician at your fingertips for people tired of the backhanded way insurances deal with them."

Her concierge service provides house calls for Covid-19 testing, but does not accept insurance. Prices for home visits begin around $500 and can be scheduled within as little as 15 minutes of the call. Hamptons Boutique Medicine offers federal Food and Drug Administration-approved, American-made swab, antibody, and rapid tests. The latter is a "finger stick serum check" said Dr. Rashid, "which gives you results in five to seven minutes and are 97-percent to 99-percent accurate. A lot of rapid tests have been emerging over the months and the ones we use are also used by nearby facilities. It works by doing a finger prick and checking a drop of blood rather than saliva."

Countywide, the total positive Covid-19 case count reached 41,056 on Tuesday. An additional 18,188 people have tested positive for Covid-19 antibodies, meaning they had the virus but it went undetected because they did not have the diagnostic tests for the disease itself.

On Sunday, County Executive Steve Bellone reported 64 new cases in a 24-hour period, but by Monday and Tuesday, new case numbers had fallen to 38 and 46, respectively, reflecting the level seen over several days prior.

On Tuesday, with just 89 people in hospital beds, Mr. Bellone reported overall capacity was at 60 percent and intensive care unit capacity was at 63 percent. One person had died of Covid-19 on Sunday and five more people died on Monday, bringing the official number of fatalities to 1,970. "We've been seeing very low numbers over the last few days. . . . We're looking forward to getting to zero and seeing that number continue," Mr. Bellone said.

With Reporting by Christine Sampson and Christopher Walsh