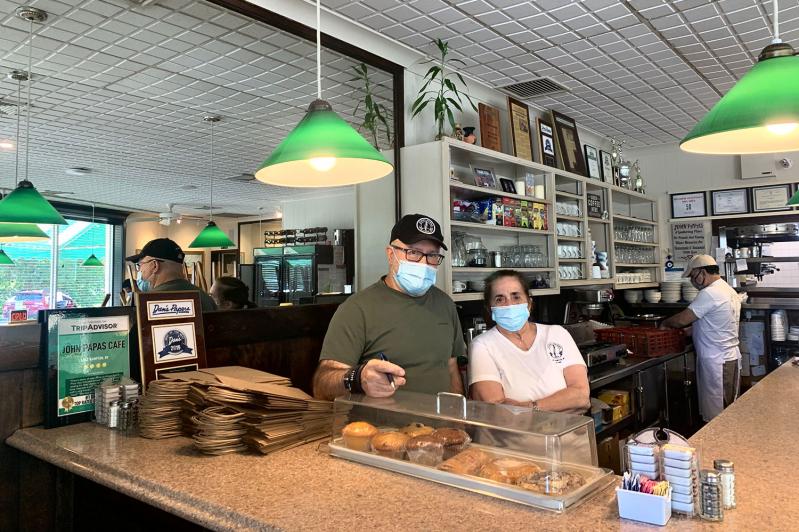 John Papas and his cousin Eva Rozos inside the eponymous John Papas diner. "I tell my kids to choose both work and life. This industry is not life. It takes a toll on you," Mr. Papas said.
Anabel Sosa
By Anabel Sosa

"When dining became a bad word, it all went wrong," said Jason Behan, an owner of the Shagwong Tavern in Montauk.

With an influx of vacationers, migrant Manhattanites, and day trippers who ventured east this summer, restaurateurs worked tirelessly to apply the state's health guidelines in ways that could fit their new business models. Even the most prepared in the restaurant industry struggled to keep up.

"It was difficult to follow the rules when the rules kept changing. There was a time where they were changing daily. We've changed our entire business to accommodate this pandemic," Mr. Behan said.

"I'm stressed out to no end here," said Rob Devlin, the owner of the Clam and Chowder House at Salivar's Dock in Montauk. "We are just trying to do what our government is telling us to do."

Mr. Devlin, who has co-owned the restaurant with his wife since 1997, has been fighting to keep his doors open while scrambling to keep up with an overwhelming staff shortage.

Their predicaments are common ones for restaurant owners on the South Fork.

Restaurants faced a shortage of workers, which owners link to fruitful unemployment benefits, the suspension of J-1 and other work visas, which typically bring in overseas workers, and employees' fear of exposure to Covid-19 upon returning to work.

About one in four people who were laid off in March and April worked in a restaurant, according to a report in Restaurant Business, a trade publication put out by the National Restaurant Association. As of August, the unemployment rate within the food and beverage services was 18.8 percent -- compared to 32.3 percent in May, according to data from the United States Bureau of Labor Statistics.

For those willing and able to work, a handful have been confronted by uncompromising patrons who seem oblivious to the risks workers face on the job each day.

"I have a 15-year-old girl who works as a host. She asked a customer to put their mask on and someone said, 'f--k you.' Who talks to a kid like that?" Mr. Devlin said.

"If we get shut down because some person won't wear a mask then that's a lot of people out of work," he said. "People have to understand we are trying to stay in business. A lot of people rely on us and count on us to be open," said Mr. Devlin, who was a commercial fisherman before catching the restaurant bug.

"And then we are the ones who are going to be at fault when they don't comply."

Mr. Devlin's daughter has been working extra shifts as a host and front-of-the-house manager to help relieve the staffing shortage. "One woman took her mask down and coughed at my daughter. Another said 'I will punch your face in if you tell me to put my mask on.' She can't take the verbal abuse anymore."

Mr. Devlin, who has been living on the South Fork for years with his family, stressed that the problem is not with the locals.

"Not every person is bad. I have wonderful customers who have supported me over the years and they're still here every night. They are my backbone. But then other people come in -- the younger crowd -- and they have foul mouths."

"Give us a break. We're just enforcing the law," he said.

"It's generally a very regulated industry," Paul Monte, president of the Montauk Chamber of Commerce, said in a phone interview. "To a certain degree, it's not foreign to be policemen. Certainly, the Covid situation has created new challenges."

"The pandemic had a big impact on us," said John Papas, owner of the eponymous diner John Papas Cafe in East Hampton Village. "Customers don't like to wait in line. They want to come in and sit. They're all like family to us, so it's hard," he said, adding that in April numbers were a third of what they normally are. A loan from the Paycheck Protection Program helped him to keep up with payroll.

Since the implementation of distanced seating, Mr. Papas said, business has improved about 30 percent.

"I tell my kids to choose both work and life. This industry is not life. It takes a toll on you," Mr. Papas said.

Alex Molina, a longtime chef at John Papas, said working in the kitchen with a mask on is far from comfortable, but he cares about the safety of the customers.

Like many restaurant owners, Barbara Layton of Babette's was on edge in the spring, wondering how the business would pull through, but Ms. Layton, who has owned the restaurant since 1995, is optimistic about the future of the industry. In the pandemic, her takeout business has "doubled if not tripled," she said.

With limitations on indoor dining, Ms. Layton was able to add an additional six tables outside. She says that the village has been exceptionally accommodating with extending table seating along the walkways. Not only that, but her landlords were willing to work with her when it was difficult to pay rent. "They are amazing people. From the beginning, it was always 'How are you and how can we help you?' "

Christy Cober, director of operations at the Honest Man Restaurant Group, worries about the other industries that rely on sales to restaurants. "There's a trickle-down effect. When they talk about saving restaurants, it's not only us -- it's other businesses, too. It's the vendors, the farmers, the fishermen, the liquor suppliers. Everyone is suffering because we're suffering."

The State Liquor Authority is "very diligent," Ms. Cober added, and will come in unannounced. Restaurants not in compliance with public health regulations this summer risk on-the-spot suspensions of their liquor licenses. Honest Man operates Townline BBQ in Sagaponack, La Fondita and Coche Comedor in Amagansett, and Rowdy Hall and Nick and Toni's in East Hampton. "It was hard to keep up with the state at the beginning."

"We're in the hospitality business, we're here to serve. But I feel like I'm constantly saying, 'no,' " Ms. Cober said, speaking of the enforcement of mask rules on restaurant premises.

Ms. Cober says she tries to use a more playful approach with customers. "I've come up with my own style, but sometimes you have to be more serious. Where it gets complicated is when families try to get their kids to wear masks."

"It's a hard business. You can't build the energy of a place on 50-percent occupancy," she said. "Rowdy Hall was built as a gathering spot. You could walk in knowing someone you wanted to see would be there. That has been the most challenging part."

One thing that has distinguished this summer from others is the absence of familiar faces, said Ms. Layton at Babette's. "There are still some regulars, but the majority of my business is brand-new people. . . . I'm hoping with the influx of other people living here, we can create a vibrant community out here. There's no going back nor should we want to," she said.

With renters expected to linger through the fall and many people making second homes on the East End their full-time homes, restaurant owners say they will do what they can to stay open.

"It's an indispensable industry," said Mr. Monte, who feels certain it will bounce back. "People will always want to go out, socialize, enjoy dinner. That's just the American way of life. What will take a little time, is for people to feel comfortable again."