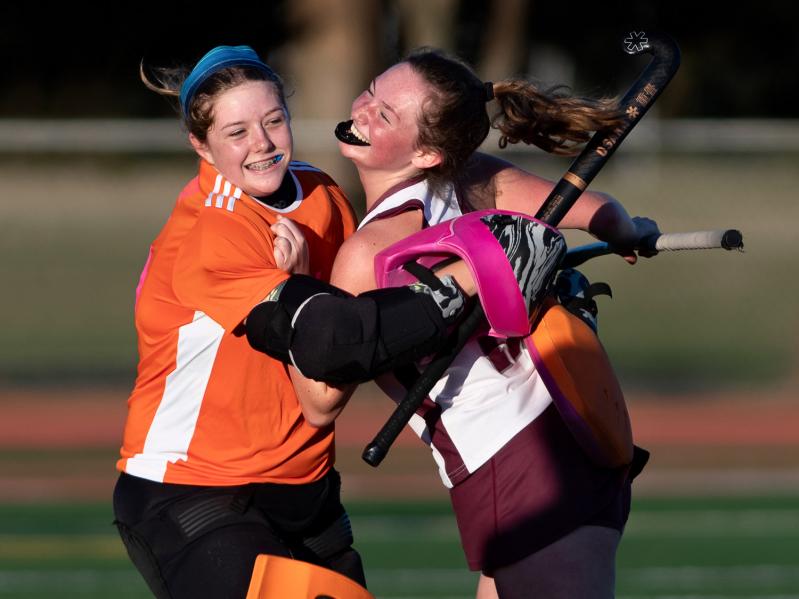 Caeleigh Schuster, a freshman who tends goal for East Hampton High’s field hockey team, and who made 17 saves in last Thursday’s 3-2 win here over Eastport-South Manor, was mobbed after the clock ran down. 
Craig Macnaughton
By Jack Graves

Homecoming weekend here is to begin Friday with East Hampton High’s field hockey team, which was 3-0 as of earlier this week, facing off against Sayville on the high school’s turf field at 4:30 p.m.

Following an 8:30 breakfast in the cafeteria Saturday morning, Hall of Fame ceremonies are to be held in the high school’s auditorium, where the latest inductees — James Stewart, Claude Beudert, Sandra Vorpahl, Brandon West, Mike Graham, the late Kevin Somers, and the 2002 boys cross-country team are to be honored before their plaques on the Hall of Fame’s wall are unveiled.

Eastport-South Manor’s girls soccer team is to play its East Hampton peers on the turf field at 11 a.m. Saturday. At the same time, East Hampton’s and Comsewogue’s girl volleyball teams are to vie in the gym. A boys soccer game between East Hampton and the Stony Brook school is to follow the girls game on the turf field at 12:30 p.m., the same time that a girls cross-country meet matching East Hampton and Rocky Point is to get underway behind the high school. East Hampton’s boys cross-country team and Half Hollow Hills West are to run behind the high school at 1:30. The homecoming football game, at 6:30, under portable lights, will match Rocky Point and Joe McKee’s Bonackers.

In addition, there will be a fall festival open to all on the football team’s grass practice field from 1 to 5 p.m., featuring food trucks, vendors, family activities, sports, games, and more. A fire truck parade passing in front of the high school is to precede a bonfire that is to be lit at 5:30.

As for the Hall of Famers, Stewart’s tenure as East Hampton High’s varsity wrestling coach included 140 dual-meet wins, five league titles, three league tournament titles, and numerous invitational tourney wins. He coached 44 league champions, one of whom was a Suffolk County champion, four of whom were county finalists, and one of whom was a state finalist.

He also coached varsity boys soccer for two decades, posting a record of 153-148-26, with two league titles, a county runner-up team, two county scoring leaders, and many all-county and all-league players. He was the county’s coach of the year in 2009, the same year in which he received the Captain Alex Fyfe Courage Award.

Sandra Vorpahl, on whose behalf East Hampton’s former athletic director, Dick Cooney, is to speak, worked in the school’s athletic office from 1983 until 2002, serving as secretary to three successive A.D.s, Cooney, Chris Tracey, and Mike Burns. Her plaque says that “not only was she skilled, organized, and dedicated, she was personable, loyal, and motivated. She would do whatever was needed to make the athletic office successful. Her contributions to the athletic department and to the student athletes helped East Hampton High School’s programs expand tremendously. . . . In addition to her role as secretary, Sandra acted as a chaperone and was a scorekeeper and timer at numerous contests, and, as a volunteer, worked at county and state playoffs. The winner of the Judith A. Martens Secretarial Award of Excellence, she was a true Bonac fan.”

Michael Graham, who graduated from the high school in 2006, and from Western New England College, where he bowled, was a six-year starter on East Hampton’s varsity bowling team, leading it to league titles in 2002 and 2006, a year in which he also led the Section XI all-star team to a New York State championship. In his senior year, he was the county’s leading bowler with a 230.68 average, breaking the previous Long Island high-average record. He was selected to six all-league teams, two all-county teams, and to one all-state team. He won the state championships’ and League V’s sportsmanship awards in 2006.

Brandon West, after a four-year career here as the boys soccer team’s goalkeeper, made four trips with Messiah College’s team to the National Collegiate Athletic Association’s Division III championships, starting as Messiah’s goalie with three of its entries, including the 2012 and 2013 national champions. As the starting goalie with Messiah’s 2012 and 2014 team, he compiled a 67-3-4 record, finishing with a .39 goals-against average. He was a three-time All-Middle Atlantic Conference selection, a one-time all-region selection, and a one-time all-N.C.A.A. tournament selection.

Kevin Somers, who died in the past year, was a three-sport athlete at East Hampton High School, excelling in golf, basketball, and baseball. In the fall of his junior year, 1993, as the team’s captain and number-one player, he led the golf team to its first win over Southampton in a decade, and to East Hampton’s first league championship in that span. Moreover, he was the top finisher that year in the conference tournament. In the winter of ʼ93, he was the starting point guard for the boys basketball team, a successful team that included among its players Scott Smith, Earl Hopson, Keon Trotman, and Ross Gload.

Somers, as the shortstop, and Gload, as a first baseman-pitcher, went to a state baseball Final Four as freshmen, and, as seniors won the county small schools championship in 1994, defeating Kings Park 10-5 at St. Joseph’s College. The honoree’s average that year was close to .400.

Somers won a scholarship to play baseball at Belmont Abbey College in North Carolina, and returned to East Hampton to carve out a career in golf, a sport that he had come to love while playing with his father, Jack Somers. Somers’s  plaque says further that “the only thing that topped his love for sports was the love he had for his family, for his parents, brothers and sisters, and for his partner, Alicia, and his daughter Lily.”

“He was our brother, our best friend,” said a good friend of his. “He was everything we know and love about East Hampton.”

Jim Nicoletti, Somers’s baseball coach, will speak for him. Cooney is to speak for Vorpahl, Ralph Naglieri for Beudert, Joe Vas, Kathy Masterson’s predecessor as the district A.D., for Stewart, Randi Cherill for West, Pete DiGate for Graham, and Diane O’Donnell for the cross-country team.