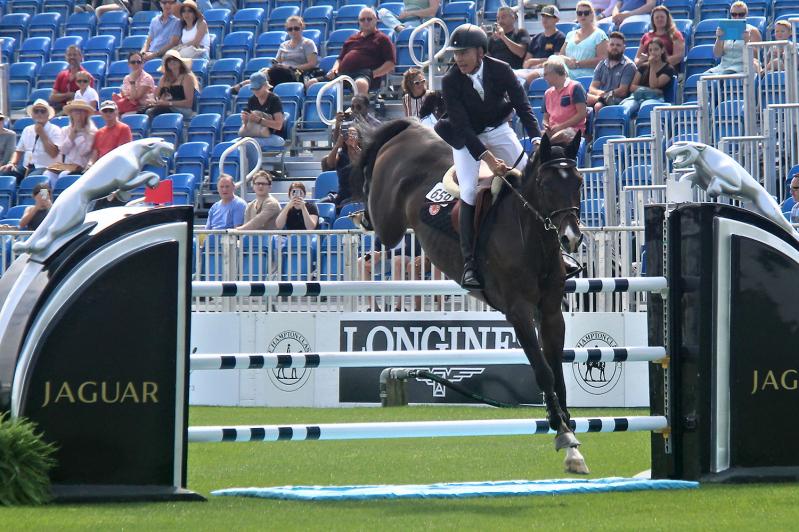 Mario Deslauriers, on Emerson, the sixth to go in Sunday's $30,000 Open Jumper Challenge in the Grand Prix ring, was that class's winner. He is the Classic's reigning Grand Prix champion.
Durell Godfrey
By Jack Graves

The Hampton Classic Horse Show dodged the bullet when it came to Tropical Storm Henri, though the footing in the Grand Prix arena, where the turf was replaced following the 2018 Classic at a cost of $1 million, proved to be a problem for entrants in the Bridgehampton show's first big jumping class, the $30,000 Open Jumper Challenge.

Consequently, most of the two-acre arena's turf was to have been stripped earlier this week and replaced with sand, the show's president, Dennis Suskind, said. Meanwhile, classes originally scheduled for the Grand Prix ring were to have been shifted to other rings.

Shanette Barth Cohen, the show's executive director, said the sand covering, which will overlie a subsurface layer of fiber, sand, and soil, will be tested "before Friday," in the hopes that the Grand Prix ring can be used for the show's climactic jumper competitions that extend through the weekend.

The revised schedule was put up on the show's hamptonclassic.com website Monday morning.

It was too soon to tell why the turf's roots weren't holding, Barth Cohen said, especially considering that the same turf held up well in the 2019 show. While the Sunday class finished, "there were a number of scratches" in the 46 horse-and-rider field.

Mario Deslauriers, who represented Canada in the Tokyo Olympics' individual show-jumping medal round earlier in the month, was the $30,000 Opening Day class's winner, aboard Emerson. They were the sixth to go, tearing around the tight-cornered 14-effort course in well under the allotted time.

Afterward Deslauriers said that in setting out he did not know that the footing would be iffy. That "surprised all of us. When we rode on it the first year after it was done it was very good. I think there's an issue with the roots."

Because of that, Deslauriers' 22-year-old daughter, Lucy, who was, with Enanda, to have been 19th in the order-of-go, did not compete.

Deslauriers is the Classic's reigning Grand Prix champion, having bested Lucy and Hester in an eight-effort jump-off in 2019 on Bardolina 2.

Carly Anthony and Heavenly W were second, McLain Ward, winner of a silver medal at the Olympics as a member of the United States' show-jumping team, was third, with Catoki, Amanda Derbyshire and Don't Touch Du Bois were fourth, and Heather Caristo Williams and Marciano MVF were fifth.

The $10,000 Marders Local Hunter Derby was won by Arabesque ridden by Brianne Goutal Marteau, Prince of Thieves ridden by Laura Bowery was second, and Trendsetter ridden by Mary Rivas was third.

Local Hunter Pro classes sponsored by this newspaper were won by Quantonius, First Watch, and Rocklyn, all ridden by Laura Bowery, by Jalisco ridden by Brooke Chasin, and by Einstein ridden by Molly Sewell.