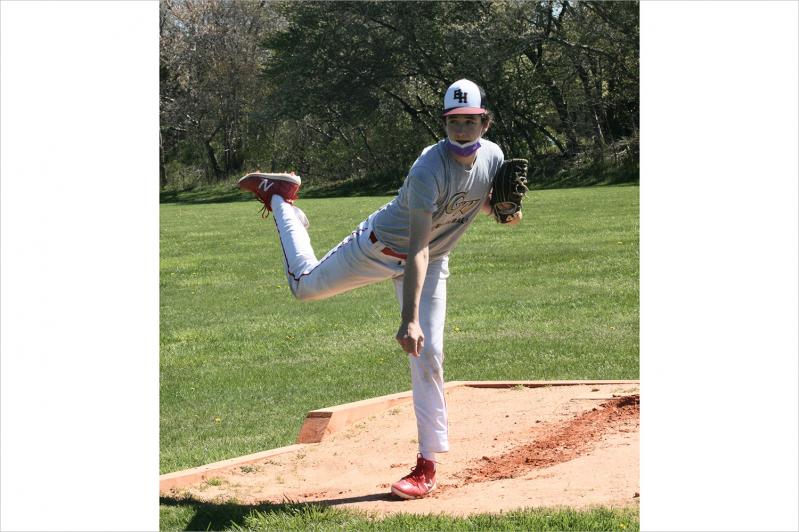 Vinny Alversa and Annemarie Brown have been working hard these past few years to build their programs at East Hampton High School -- baseball in Alversa's case, softball in Brown's -- and this hard work seems to be on the verge of paying off, if last week's practices are indicative.

Alversa's cup is overflowing when it comes to pitching, boasting a staff of six headed by Colin Ruddy, a 6-foot-5-inch junior right-hander who last August was one of the nation's top 150 high school prospects invited to the Area Code Games in Atlanta.

Ruddy, a George Washington University recruit who plays for the East Coast Lumberjacks in tristate area tournaments, pitched one inning in the Area Code Games, fanning the three batters he faced. He has a repertory that includes a moving fastball, changeup, knuckle curve, and slider, all of which he can throw for strikes,

Jack Dickinson, a 6-2 sophomore right-hander who first played on the varsity as an eighth grader, and Charlie Condon, a 6-7 senior left-hander, will alternate at two and three, said Alversa, adding that he will also have on hand as possible starters Will Darrell, a sophomore, Drew Salamy, a senior, Hunter Eberhart, a sophomore, and Avery Siska, a junior.

"They're pitchers, not throwers," the coach said.

Alversa and his assistant, Henry Meyer, have 16 talented players to work with and hadn't penciled in a starting lineup as of Sunday. "The competition's wide open," said Alversa. "It'll come down to whoever hits."

In the off-season Alversa and Meyer have been coaching traveling teams in Brookhaven leagues, and will continue to do so. Alversa's son, Kai, a Bridgehampton seventh grader, is playing Little League and will play this summer for his father's 14-and-under East End Tides.

Meyer's son, Hudson, an eighth grader, will catch and play in the infield for this season's Bonac junior varsity, which is being coached by Rob Rivera and James Foster, Andrew Rodriguez having had to give up coaching because of the requirements of a new job.

"A-Rod has gone on to bigger and better things -- we're sad to see him go. He did everything and more, but with his new job he doesn't have the time. He'll be missed."

The varsity is to open the season here this afternoon in a scrimmage with Pierson. The team is to play its first conference game with Kings Park at the Moriches Sports Complex's number four field Saturday at 5 p.m.

Besides Kings Park, East Hampton's other conference opponents will be Rocky Point, Westhampton Beach, Sayville, Islip, Miller Place, and Harborfields. East Hampton will play each team twice. The top four and teams with .500-plus records will advance to the playoffs.

As for softball, Brown said during a telephone conversation Sunday that "our only problem so far -- and it's a good one to have -- is that we've got a lot of good players, on the varsity and on the jayvee too."

After Saturday's practice, she and Melanie Anderson, her assistant, sat down with every player to determine which squad would be the best fit for them. The varsity, she said, is keeping 13, the jayvee, which is being coached by John King and Kelly Doyle, is keeping 16.

Katie Kuneth, a ninth grader, is in center field, with left and right up for grabs among Ella Eggert, a sophomore, Nicole Lopez, a junior, Sophia Yardley, a junior, and Sarah Morgan, a junior.

When Brown took over coaching softball two years ago, after Lou Reale, one of the state's winningest coaches, had retired to Florida, she vowed to bring "Reale Ball" back. Judging from this week's practice sessions, in which the players reacted well in various situational drills, it seems she and Anderson have done so.

"In the summer of 2019 I coached a 10-and-under team and a 14-and-under team in Brookhaven, and in the fall we had a 12-and-under and 14-and-under teams, not to mention all the open workouts and clinics we held. We played in a varsity league in Brookhaven this past summer, and a lot of the girls on our squads played. Melanie and I are very happy and very confident we'll have a successful season. . . . They can all hit too."

"Our hardest competition will come in our first two games -- at Kings Park on Tuesday and at home on Saturday, the 8th, with Sayville."