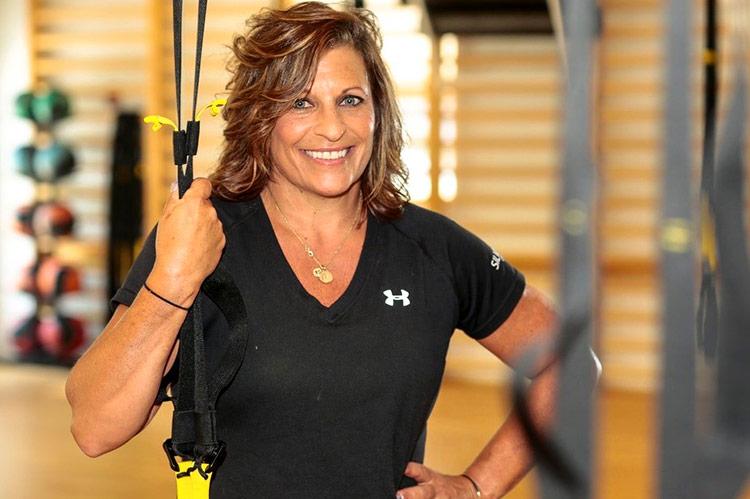 No, she had not been sitting at home, Linda Silich said, when asked this week what she’d been doing during the coronavirus shutdown. The demands of her two businesses — a highly rated TRX-based fitness studio in East Hampton Village and Groundworks Landscaping in East Hampton, on the way to Amagansett — had been taking up much of her time.

Though not untouched by life: Her father, a former collegiate football player and Lutheran minister from Ohio in whose footsteps she’d followed when it came to graduating from Wittenberg University and active living, had died within the past week, and, she added, on April 20, her first granddaughter — her daughter Erica and Anthony Daunt’s first child — had been born at Southampton Hospital.

“Her name is Mila Adelaide. I haven’t had a chance to hold her yet,” Silich said, alluding to the constraints imposed by the pandemic, “but I’ve seen her from afar, and on FaceTime every day.”

A black-ranked TRX trainer (equivalent to a top-ranked black belt in karate), the former gymnast and dancer from New Philadelphia, Ohio, got into personal training when living some years ago in Reston, Va., to which she’d moved with her Amagansetter husband, Andrija (Andy) Silich, from New York City, where they’d been co-workers at Canon.

“We’ve always been business partners too, come to think of it — with Canon, with Computer Associates, in Reston, where we raised our three children, and at Groundworks,” which she and Kim Hren founded in 2002.
Silich and her husband first met in the spring of 1986, Silich said — a great sports year, with the Mets winning the World Series and Penn State, his alma mater, where he’d been a sportswriter for The Daily Collegian, winning the national collegiate football championship.

“Oh yes,” she said, “we went to many Mets games then, and to Penn State games too. We still do.”

As for TRX training, which she’s overseen at her 79 Newtown Lane studio abutting Herrick Park since 2014, Silich said that when body-resistance straps were introduced a decade ago, “Another trainer said to me, ‘You’re going to like this.’ I went to the city and took some courses, and got hooked. I took courses all over the country . . . in Baltimore, Austin, Texas, upstate. . . . My goal was to be an officially certified TRX trainer at the highest level. It took me eight years! I didn’t think I’d ever do it. I’m glad and proud that I did. I still take courses.”

She opened her studio here, she said, before functional training really took off. “Thanks to my year-round clientele doing TRX with me elsewhere, I was able to jump-start my business.”

With the TRX straps “you’re using your own body weight and gravity to develop strength, balance, flexibility, and core stability — all at the same time.”

“You have to really think about what you’re doing with your body,” she continued. “You’re working your core the entire time, though it’s a great stretching and flexibility tool as well.”

Close supervision was essential, she added, which is why she keeps her groups small.

“I want everybody to stay active and healthy,” she said in an interview in these pages in 2012. “It keeps the mind sharp. The body is like a car; if you don’t use it and oil it and do the maintenance, it won’t run.”

A winner of the Wellness Foundation’s Illumination Award in 2018, Silich and Christa Schleicher, the lead certified National Academy of Sports Medicine personal trainer at SilichCore+ — the only licensed TRX functional training facility on the East End — have been doing one-on-one and small group classes over Zoom, and complimentary Instagram classes, since March. A workout calendar is online at silichcore.com.

The 800-square-foot fitness studio has been closed since the governor’s lockdown order was announced in mid-March.

“I don’t know when we’ll be able to reopen,” Silich said, “but when we do, yes, we could make it safe. It’s not like gyms that have a lot of people and a lot of machines to clean. We’ve never had groups of more than 10.

We could scale them back further, and we’ve just got these straps, which are easy to clean, as are our six WaterRowers.”

Groundworks, where she is one of the landscape designers, has also been using the Zoom platform to consult with clients.

So, yes, the coronavirus shutdown had been eventful, she said, what with running two businesses, her father’s death, and the birth of her granddaughter. “It’s been hard . . . we’re trying to be careful. I’m hoping I’ll be able to hold her soon.”

Spring Has Sprung at the L.V.I.S. Shops
An Online Auction for ARF
A Rescheduled Telephone Town Hall With Lee Zeldin
END_OF_DOCUMENT_TOKEN_TO_BE_REPLACED