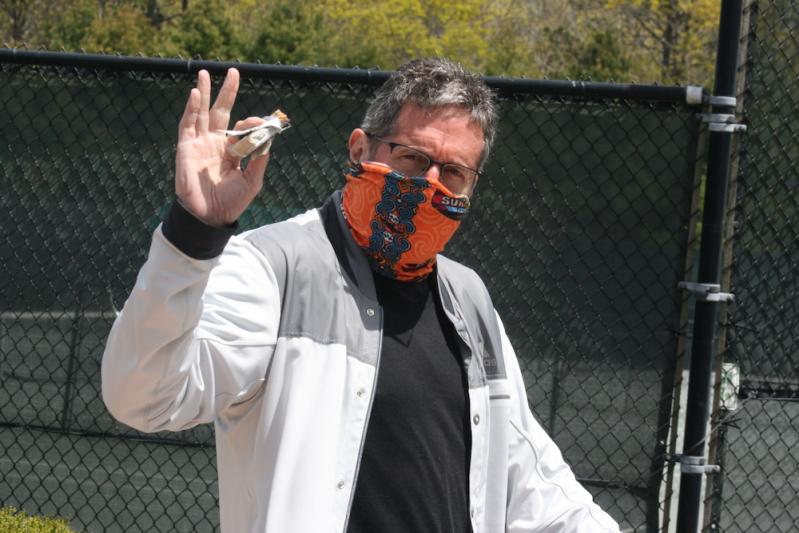 Scott Rubenstein, the owner of East Hampton Indoor Tennis, was back at work this week after the state gave tennis clubs the okay to open for singles play.
Jack Graves
By Jack Graves

The weekend past was the first in which tennis clubs have been open for play, having been moved up by Gov. Andrew M. Cuomo from the fourth to the first phase in a planned step-by-step reopening of the state in the wake of a total shutdown prompted by the coronavirus pandemic two months ago.

Scott Rubenstein, of the East Hampton Indoor/Outdoor Club in Wainscott, and Claude Okin, whose Sportime club in Amagansett is one of a number of tennis clubs in the metro area that he owns, said things had gone well.

Okin said a guideline issued Saturday afternoon by the Empire State Development Corporation persuaded him that doubles, provided that social distancing was maintained, could be played. “The Nassau County executive didn’t read it that way — it’s a mess. They really should leave it up to the professional operators to decide,” Okin said. “A tennis court, after all, is 7,200 square feet, and when you hit the ball it’s three to four feet away from you. As long as people play smart and don’t go back for overheads, for instance, I think doubles can be played safely.”

As for the initial turnouts at Sportime, Okin said, “We were busier than we usually are at this time of year. There are a lot more people out here, you know. Every day we have people playing, and they’ve been responsible — all of them are wearing masks — they’ve been thoughtful, they’ve been aware. Their behavior has been impressive. . . . We’re still not totally open — the buildings are closed, there’s no food . . . it’s a different look, for sure, but we’ll get there.”

For Rubenstein, 60, it felt particularly good to be back at work, for he contracted Covid-19 on March 16, soon after the governor had imposed the statewide lockdown.

“I spent 28 days in my bedroom with it,” Rubinstein said during a telephone conversation Monday. “I never thought I was going to die, but it’s scary, I was nervous. It was the worst case of the flu that I’ve ever had.”
He “had all the symptons . . . no sense of taste, no sense of smell, a nonstop cough, a fever, body aches, sweating, chills. . . .”

His decision to self-isolate at home, which he shares with three others, was buoyed by Dr. Blake Kerr’s telling him, “You want antibodies over antibiotics . . . if you can fight it, fight it.”

His wife, Holly, would leave food outside his door, he said. “She’d knock and run.”

His wife did suggest that he get tested, “but at that time the nearest testing site was at Jones Beach, and I thought the first responders should get tested first.”

“I never felt I had to go to the hospital,” he said, “though there were two days and nights where I could barely make it to the bathroom and back. The hardest part was that I had no energy — I felt like I was 100 years old. My breathing? It was rough. I was either sweating or shivering. The cough started to go away after about 17 days. . . . I was living on DayQuil and NyQuil.”

“Each day, I felt a little better,” he said. And now? “Now, I’m feeling better. I had a blood test at Urgent Care in Amagansett a couple of weeks ago. It showed I’ve got the antibodies.”

Indeed, the past two months had been a difficult period, offering “a lot of time in which to think and reflect,” he agreed, but the past weekend’s turnout of E.H.I.T. members, all eager to play tennis again, had been buoying.
“There were probably 70 or more here on Saturday . . . there were fewer, about 40, on Sunday, but the weather that day was cooler.”

There was no stampede — those wanting to play were asked to email the club first, and court times were assigned so that there would not be any crowding.

At E.H.I.T., players must wear masks on the deck, stay at least six feet apart, and use an automatic hand sanitizer and new balls that are marked so that players can handle only their own. They can also wear rubber gloves, which are supplied, on one or both hands if they wish.

Asked about doubles — a staple among E.H.I.T.’s older members, men and women — Rubenstein said he thought it would be sanctioned “within the next week. . . . As long as you keep your distance, handle your own balls, and kick back your opponents’ balls, it should be all right.”

“Though no chest bumps and high-fives anymore,” he said. “Those days are over.”