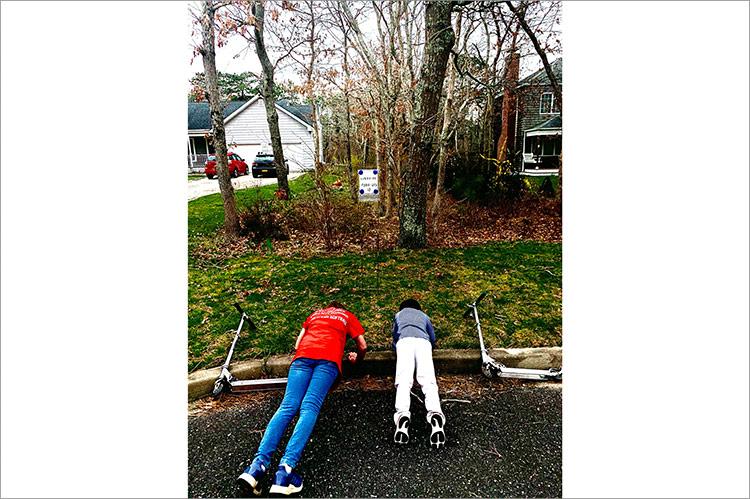 On a quiet street in East Hampton, parcourse-like stations have mysteriously appeared, a boon to the workout-starved. Above, Lilah Brown, 10, and Leo Brown, 5.
Annemarie Cangiolosi Brown
By Jack Graves

Yani Cuesta, who coaches East Hampton High’s girls track team, said during a telephone conversation on Friday that she thought there would be no spring season, at least insofar as girls track was concerned.

Annemarie Cangiolosi Brown, the high school’s softball coach, who lives not far from Cuesta, on Kopka Court, off Stephen Hand’s Path in East Hampton, said on Sunday that she’s hoping that the end-of-May modified season that Section XI, the governing body for public high school sports in Suffolk, envisions will come to pass.

“I’d be so happy if it did,” Brown said. “I’m the type of person who when they wake up needs to know what’s going to be for dinner. It’s been hard with all these unknowns. . . . I’ve worked with my kids all year, in the summer, in the fall, and in the winter. We were ready to go when this happened,” she said of the coronavirus outbreak and the consequent closing of schools.

Cuesta said she’d been trying to keep up with her online Spanish classes for Pierson (Sag Harbor) High School students, and had provided her team members with various core workouts to do, advising them to run 15 to 30 minutes every day to stay in shape.

“If our apex is two weeks behind New York City’s, as they say it is, I don’t see us having a season,” she said. “Though I do have a practice schedule prepared in case we do come back. Some coaches have said maybe we could have a summer season, but the seniors will be off to school then.”

And even if the students were to return, “we’d have logistics problems. We’d have to space out our practices — we’ve got 48 on our team alone, and then there’s boys track, and middle school track, over 100 kids in all. . . . Nobody’s saying, but it looks like the season is over.”

When this writer said he thought the field events, and even most track events, as long as the runners were properly spaced, might be feasible in an intramural setting, Cuesta remained doubtful. “Theoretically, you might be able to do it, but then you’d have other coaches saying, ‘If they get to do it, why can’t we?’ And the track is closed — it’s locked until further notice.”

Cuesta, who has prepared a demanding video workout that includes burpees, crunches, squats, and T push-ups for a friend of hers, Rocio Gutierrez, said there was some good news: On her street she’d seen parcourse-like signs spaced out along the edge of it “with plastic bags over them. You’ll come upon one that says ‘Ten Squats,’ and then, a little farther on, ‘Ten Curbside Push-Ups,’ then, still farther down the road, ‘Ten Mountain Climbers.’ “

She didn’t know who had put them up. Perhaps Brown had. She had seen her and her children on scooters, stopping at each of the stations. Anyway, Cuesta said, it was “terrific.”

Brown, who has been overseeing John M. Marshall Elementary School physical education classes online, said that a John Marshall colleague, Maria McMullen, who “lives on the other cul-de-sac,” had put the signs up.

“There are six families, all with a lot of kids who go to John Marshall, living on these cul-de-sacs. I do the exercises with my kids, Lilah and Leo. Jeff Tupper, who also teaches at John Marshall, does them with his three kids riding bikes.”

They were basically the same exercises — jumping jacks, hopscotch, and lunges were others — that she oversaw in her phys ed classes when school was in session, and the same ones she, with Lilah and Leo as participants — sometimes in superhero costumes — uses in her online classes.

The cul-de-sac exercisers were observing the required social distancing, Brown said, and were usually exercising at different times of the day.

Asked about her softball players, Brown said she and they had been keeping in touch. She had given them drills they could do on their own, and she’d been sending them “inspirational quotes.”

Her favorite one, she said, was from Mary Lou Retton, the retired Olympic gymnast: “Each of us has a fire in our heart for something. It’s our goal in life to find it and keep it lit.”

East Hampton Samples Are a Crucial Contributor to Lyme Test
Ready to Adopt a Pet? ARF Is Ready, Too
Guild Hall's Curator Visiting Studios Virtually Through June
Seeking Stories and Images From the Time of Covid
END_OF_DOCUMENT_TOKEN_TO_BE_REPLACED