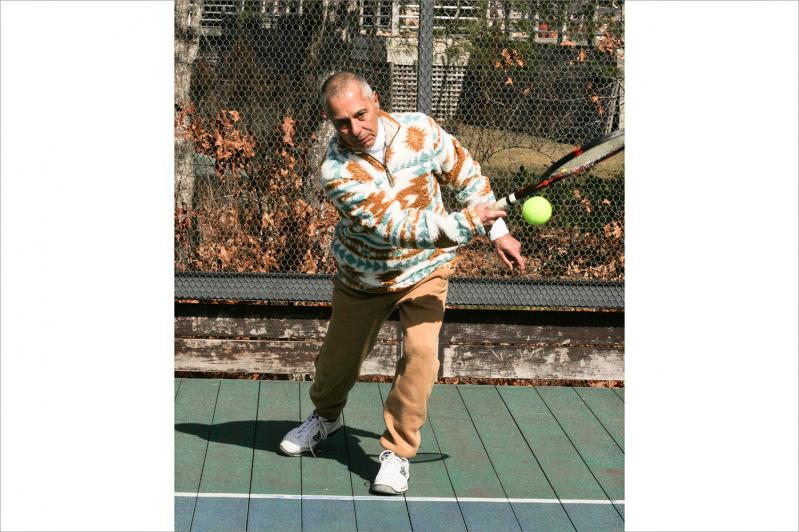 Gino Fava has for a while been a proponent of the underhand serve, the use of which, he said during a conversation at the East Hampton Indoor Tennis Club the other day, often is viewed as an underhanded tactic by receivers.

But it’s not, it’s perfectly legal, the Montauker said, and, moreover, so effective that he’s baffled that more tennis players, including the touring pros and college players, don’t use it. Michael Chang had famously used it to defeat Ivan Lendl in a French Open semifinal match in 1989, “though he had to use it — because he’d damaged his shoulder and couldn’t lift his arm.”

“It’s been around for at least a century,” said his interviewer, who had been taught how to do it by the late Jacques (Toto) Brugnon, a friend of his stepmother’s and one of the “Four Musketeers” (Rene Lacoste, Jean Borotra, and Henri Cochet being the others) who ruled professional tennis from the second half of the 1920s into the early ’30s.

Asked where he’d first seen it used, Fava, who’s played the game for the better part of 30 years, said, “I think it was about five years ago. I was watching videos of Mansour Bahrami. He has all these weird shots. He’ll throw the ball up for a serve, let it drop, and slice under it. . . . He’ll throw it up, let it drop, and hit it another way. He’ll hit it behind his back, he’ll hit with his back turned to the net. . . . You never know what he’s going to do. He’s a trick-shot artist, fun to watch. Watch his videos and you’ll see.”

“Sort of like Al Schacht? ‘The Clown Prince of Baseball’?”

“Yeah, so when I saw him serve that way, sweeping the racket head sidewise and swiftly under the ball, I began to practice it on my own.”

And he began using it periodically, as a change of pace, against his peers, who, to make matters worse for them, are no longer fleet afoot.

“Then I made a video, about four years ago, which has received more than 41,000 hits. When you’re serving you’re like a pitcher. You don’t want the batter to know what’s coming. It [the underhand serve] is not cheating — absolutely not. I don’t see the difference between the underhand serve and a drop shot. And I think if some of these better players start to use it people are going to love it. ‘Oh my God, look at that!’ It will become a part of the game. As soon as they realize how successful they can be with it, especially against receivers playing well behind the baseline. Mix it up — that’s the game. Surprise.”

Having been on the receiving end of Fava’s underhand spins, which, once having bounced within the service court, can careen at right angles to the left or right, this writer can vouch that they’re troublesome. Fava’s quite good at not tipping them off, and even if, after dashing forward, you get the ball back, you’ll not be able to do much with it.

“Tennis, you know, is very mental. This serve is like Hoyt Wilhelm’s off-speed knuckleball — it can get people so frustrated that it affects the rest of their game. And once the mental part of the game starts to go, it’s done, you’re finished. You’ll double-fault on match point.”

“Brush under that ball and it heads for the water cooler. It’s like a drop shot that ends a rally. Your opponent might get it up, but you’ll win the point on the next shot. It’s the same with the underhand serve. It’s like I said in the video — after he gets to it, assuming he gets to it, you’ll be looking at the Grand Canyon. . . . You can turn a match around with this. If you’re up 40-love or down love-40, or in a tiebreaker. . . . Throw it in and change the momentum of the match.”

“I was playing basketball at the New York Athletic Club. It was beautiful. Every day there’d be games on five courts. Serious basketball. But I kept getting hurt. I’d drive to the basket and the hammer would come down. Finally, a good friend of mine — he is to this day — said, when I told him I couldn’t play anymore, ‘Come to the tennis court with me and I’ll put a racket in your hand — I guarantee you’ll love this game.’ We did, it was at East River Tennis. He took a racket out of his bag and we began hitting it back and forth, mini tennis. And he was absolutely right. I was back there the next day, and I started playing and taking lessons. . . . And here we are. The love of the game doesn’t diminish.”