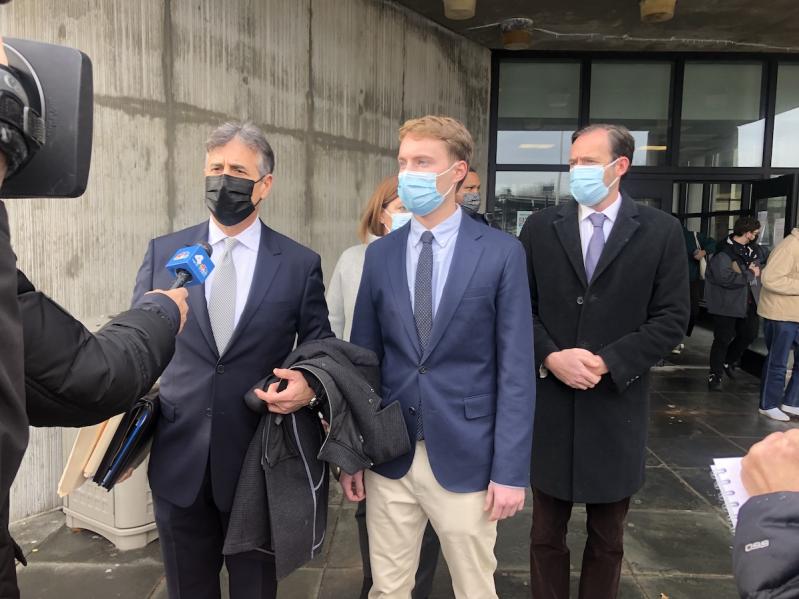 It has been nearly a year since the hit-and-run accident that caused the death of a Hong Kong teenager on a dark road in Amagansett, and the man behind the wheel could learn his fate as soon as Friday in Suffolk County Criminal Court.

It is possible that Daniel Campbell, who was driving a midsize S.U.V. with nine passengers near the site of a massive house party on Aug. 10, 2021, when he struck 18-year-old Devesh Samtani, will not serve jail time, The Star confirmed this week.

Mr. Campbell, now 20, of Hastings-on-Hudson, N.Y., faces a felony charge of leaving the scene of an accident resulting in death. Both Edward Burke Jr., his Sag Harbor-based attorney, and Omar Almanzar-Paramio, an attorney for the victim's family, said it was possible that Justice Richard Ambro will impose community service and probation.

At the heart of Friday's hearing will be the pre-plea report, based on Mr. Campbell's interview with the probation department, the facts of the case, and everything that has transpired since, including the fulfillment of his supervised release conditions. "The judge has that pre-plea report, and we're anticipating news about how he feels and where we're going from there," Mr. Burke said by phone on Tuesday.

Mr. Almanzar-Paramio said on Monday that Mr. Campbell intends to plead guilty — information that he said he learned directly from Ray Varuolo, the assistant district attorney who is prosecuting the case for the county. The D.A.'s office has recommended a jail sentence of one to three years. Mr. Burke declined to confirm whether such a plea will be entered.

Friday, he said, is "a procedural day, but can be a very important day. Community service is an option for the court to consider legally."

Speaking from his Hong Kong home on Monday, Kishore Samtani, the victim's father, said he was shocked to hear from Mr. Almanzar-Paramio that it is possible Mr. Campbell will not serve jail time. "Somebody can just hit, run, know that somebody is killed, run away, change cars, and walk free? . . . We believed that Devesh would have justice," he said.

The night of the accident, according to East Hampton Town Police records, between 800 and 1,000 youths had been at a party thrown by a 19-year-old girl at a house on Timber Trail, off Old Stone Highway. Police arrived to break it up, dispersing people into the neighborhood's dark streets. Mr. Campbell struck Mr. Samtani on Old Stone Highway, a narrow road really, near a curve at Eastwood Court. Ten years ago, a 17-year-old pedestrian was killed on the same road, not far away.

Mr. Campbell told police that he drove about 100 feet after the crash, stopped, got out of the S.U.V. to check the damage, then fled the scene. He blamed a "panic attack" in a seven-page written statement to detectives.

A witness was able to snap a photo of the Honda Pilot's license plate. Mr. Campbell later used a different car to meet a friend in Montauk, but returned to his family's Montauk house at his parents' urging after police showed up there looking for him. The prosecution has alleged that he used his cellphone to explore ways of leaving New York State, including the possibility of taking a train to Pennsylvania.

Devesh Samtani, who was affectionately known as Devu, was to have begun studying economics at New York University in the fall 2021 semester. Instead, he died of head injuries at Stony Brook University Hospital three days after being hit. The family has set up a nonprofit organization, the Devesh Samtani Foundation, that is sponsoring one student at N.Y.U. this year and providing schooling in Canada to 46 others.

"There has not been a day we don't think about this," Kishore Samtani said. Mr. Campbell "has actually killed my whole family. My whole family is going through trauma. One to three years would have been something. . . . We are still not accepting this."

The family has not ruled out a civil case, but that is extremely complicated, Mr. Almanzar-Paramio said. "Because Devesh died without a will, we [would] now have to go through surrogate's court in a foreign country."

Kishore Samtani said Mr. Campbell has not apologized to his family.

"We, at the appropriate time, whether it's Friday or another court date, plan on addressing the court and certainly the family," said Mr. Burke.

Mashashimuet Park's History and Future
A Conference for Young People to Create Solutions
Get Outside, Get Moving
END_OF_DOCUMENT_TOKEN_TO_BE_REPLACED