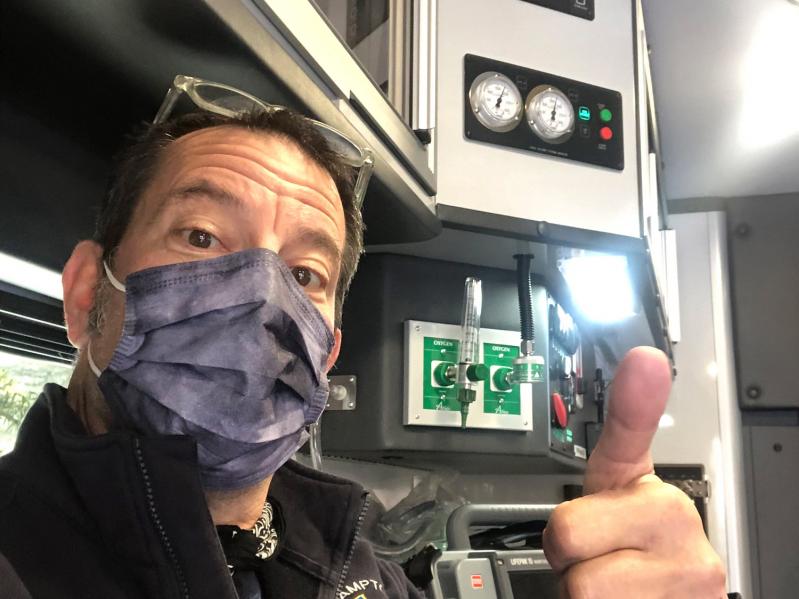 Randy Hoffman has been a critical-care emergency medical technician since 2006 as both an East Hampton volunteer and a paid paramedic in other local fire departments.
By Christopher Gangemi

On Aug. 4, without naming the individual, East Hampton Village posted a press release on its Facebook page announcing the 30-day suspension of a volunteer emergency medical services worker from the Village Ambulance Association after “hostile work environment” complaints filed against him were “found to be valid.”

While the village may not have named him, by that point Randy Hoffman, the longtime critical-care E.M.T. who was told of his suspension the day before, had already named himself, sharing his side of the story and expressing his frustration with the decision on Facebook on Aug. 3.

The village said in its release that it had received two complaints about the volunteer from two separate female employees on two separate dates and that the village attorney and village administrator had met with the Ambulance Association, which investigated them them before reaching the decision.

In the press release announcing the suspension, Mayor Jerry Larsen said, “We stand together and will not allow any type of harassment in the workplace.”

Mr. Hoffman, for his part, described the incident like this in his Aug. 3 post: “I was having a conversation with one of the new paid EMTs. I voiced my opinion about how I really believe in the volunteer system and I feel like having paid EMTs in East Hampton is like the tail wagging the dog. We happen to have plenty of volunteers that live in our district and we cover MOST of our calls.”

What he thought was “a friendly discussion” apparently made the employee uncomfortable enough to file a formal complaint with the village.

“It feels to me like somebody wanted to make a point,” Mr. Hoffman said by phone last week. “It seems radical to me.”

Mr. Hoffman reported that the ambulance association, by order of the village, “came over and took my 800 radio and pager away.”

Volunteers, like Mr. Hoffman, generally live in the district they serve and answer to the chief of the association, a post now held by Ann Graboski, and their other elected officers. Paid paramedics and paid E.M.T.'s are not part of the ambulance association, and answer only to Police Chief Mike Tracey. They are not required to live in the district.

There are simmering tensions in some quarters between the volunteers and the paid paramedic system.

“It becomes a sort of ‘us versus them’ type of mentality,” Mayor Larsen said over the phone last week. This creates an uncomfortable divide between the two types of emergency services providers who may be sitting together in the same ambulance.

Striking a balance between volunteer units and the paid emergency services employees is the job of Ms. Graboski. If there are too many staffed units, costs go up. However, relying solely on volunteers when more calls are coming in, but recruitment is down, is risky. Managing and integrating the two factions is a challenge. It’s unclear what the recruitment trends are, but anecdotally, recent population increases have not led to more volunteers, which has caused strain.

Ms. Graboski did not respond to multiple requests for comment.

“The volunteers do a great job,” said Mayor Larsen. “They’re overworked and underpaid.”

In fact, volunteers receive no pay. They receive points through a Length of Service Award Program, or LOSAP, which eventually convert to retirement dollars after they reach a certain age. Before 2013, the association was run almost exclusively by volunteers.

Mayor Larsen said he “was instrumental in pushing the village board in 2013” — when he was the village police chief — “to create the paid paramedic program. The ambulance association has aged, and not unlike other departments, they haven’t been able to recruit much. It’s something that’s concerning,” he said. In June, the village authorized the addition of paid daytime E.M.S. workers, “because volunteers are working and are often not available. We recently added a full-time crew to work around the clock as well,” he said.

As a result, the mayor said, there is always one fully equipped ambulance.

In July, with more paid E.M.S. workers than ever, there were 184 calls for service with an average response time of 12.7 minutes. More calls, more paid workers, anecdotally fewer volunteers, and the highest response time in 20 years. There’s also more traffic.

Ambulance response time standards shift depending on geographic circumstances. Looking online, anywhere from nine minutes in an urban area to 13 minutes in a rural area appears normal. Anyone who has tried to drive down Montauk Highway in the heart of the summer can understand the difficulty in applying a single standard to the South Fork. Twelve minutes and change seems reasonable.

“We’re not trying to do anything to diminish the role of the volunteer,” said Mayor Larsen. “We’re just trying to give them reinforcements. Some volunteers are not appreciative of the help and don’t think there should be paid personnel. That’s the root of the complaint.”

“We’re all just trying to take care of patients,” Mr. Hoffman said. The village, he added, is “losing out on a good thing. I went on a lot of calls.”

Among the recognitions for his service as an E.M.T. was one in 2018 from the Suffolk Regional Emergency Medical Services Council for being part of a team that saved the life of a man who had collapsed in East Hampton Village that January.

Mr. Hoffman was temporarily paralyzed after spinal surgery in December 2019. He has regained his ability to walk, but remains in physical therapy as he continues to recover. “As soon as I’m able to walk a bit better and carry equipment, I hope to be able to work on weekends at Montauk FD and Sag Harbor EMS,” he said by text this week.

He is set to be reinstated with the village ambulance on Sept. 2, but said this week that he is mulling whether to continue his volunteer service.
--
Correction: An earlier version of this article incorrectly said that the chief of the East Hampton Village Ambulance Association answers to the village's chief of police. That is incorrect. Additionally, ambulance association members answer to their elected officers, not to the village board. It was the ambulance association, not the village, that supsended Mr. Hoffman.