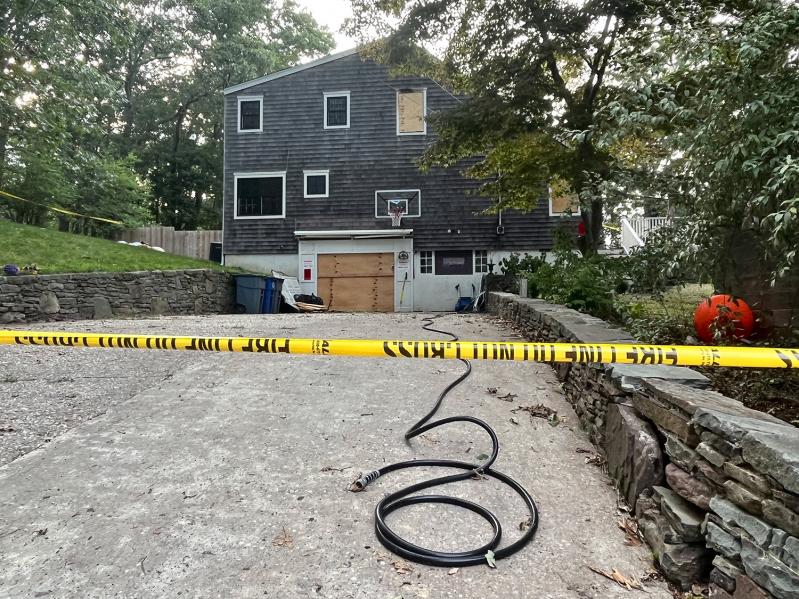 Two young women died in a fire on Aug. 3 at this house in Noyac.
Christine Sampson
By Tom Gogola

Lawyers for the family of two young women killed in a Noyac rental-home fire this summer have taken their case to federal court.

Andres Alonso and Martin Grossman on Monday filed a complaint with the United States District Court, Eastern District of New York, asking for at least $75,000 in compensation along with unspecified damages for a host of other harmful impacts they say the vacationing Wiener family experienced at the house, owned by Pamela and Peter Miller, in August.

The lawyers also sued 3 Spring Lane I and 3 Spring II L.L.C.s, controlled by the Millers, and the short-term rental entities Homeaway.com and VRBO Holdings.

The Wiener family was staying at 3 Spring Lane when an early-morning fire broke out on Aug. 3, leading to the death of the two women.

“Defendants’ greed, corner-cutting, and willful failure to give any thought to the safety of the occupants of the premises led to the deaths of Jillian Rose Wiener and her sister Lindsay Eliza Wiener,” the lawyers charge in their filing with the Brooklyn-based District Court.

Jillian Wiener was 21 at the time of her death, Lindsay Wiener 19. They were asleep on the second floor of the house when the fire broke out. Their father, Lewis Wiener, 60, and mother, Alisa, 52, both escaped the fire, as did their 23-year-old brother, Zachary, who had burns on his hands. Lewis Wiener had burns on his hands and feet and was also treated for smoke inhalation.

The Millers are facing dozens of code violations at the house, which they had advertised through Homeaway and VRBO as the intermediary rental agent.

They were scheduled to be in Southampton Town Justice Court for a 1 p.m. hearing on Friday, but that hearing was adjourned until January. The only people with an interest in this case who showed up in court Friday were Mr. Alonso and Mr. Grossman, who apparently had not been notified that the hearing had been rescheduled.

Last month, Mr. Alonso wrote a letter to Suffolk County District Attorney Raymond Tierney asking why his office was not pursuing any criminal charges against the Millers. Mr. Alonso says that he has since been in contact with county investigators and that they told him that they are indeed investigating the fire as a criminal matter.

“We are hoping that the Suffolk County District Attorney files criminal charges,” Mr. Alonso said, “which are in keeping with the conduct of the Millers.”

Tania Lopez, a spokesperson for the district attorney, told The Star in October — following receipt of Mr. Alonso’s letter — that “the D.A.’s Homicide Bureau is investigating this tragic fire,” but said she couldn’t comment further given that the inquiry is ongoing.

In their court filing this week, the Wiener family’s lawyers are also ascribing blame to the rental agencies that secured the vacation home for the Wieners.

“At the time of the fire,” the Wiener family’s lawyers say, “the smoke alarms had either been disconnected from any form of electrical supply, had their batteries removed, or contained lifeless batteries.”

The Millers had done extensive renovations on the home, including the addition of an outdoor kitchen that town officials suspect was the cause of the fire.

Mr. Alonso has pointed to a report from the electrical expert enlisted by the Southampton Town attorneys to investigate the source of the fire. He said that report “makes clear” that the outdoor kitchen had been installed illegally, thus creating the risk of fire. The report was prepared by the East Quogue-based company East End Inspections following an Aug. 18 electrical-systems inspection of the heavily damaged house.

The lawyers further claim in their filing this week that at the time of the fire, the house didn’t have a required Southampton Town rental permit, nor had its new outdoor kitchen been inspected by “a qualified electrician or other professional to ensure that it complied with local, state, and national safety standards.”

The civil suit calls for compensatory damages in excess of $75,000 pegged to the “pain, suffering, emotional distress, loss of enjoyment of life, and other non-economic damages in an amount to be determined at trial.”

The suit seeks additional damages to cover medical, out-of-pocket, and funeral expenses, lost earnings, and other “economic damages.” They also seek punitive damages for alleged “wanton, willful, fraudulent, reckless acts of the defendants, who demonstrated a complete disregard and reckless indifference to the safety and welfare of the general public and plaintiffs in an amount sufficient to punish defendants and deter future similar conduct.”

Edward Burke, the Sag Harbor-based attorney for Pamela and Peter Miller, has said that his clients have themselves been deeply traumatized by the Aug. 3 fire.

Mr. Alonso, who has offices in Melville and New York City, also put Southampton Town on notice that his office was holding them responsible for the fire. In a separate filing last week, he argues that Southampton — even as it has charged the Millers with dozens of violations of local building and fire safety codes — had itself fostered conditions through which a hazardous and permit-less rental could operate.

The town, Mr. Alonso argued, was responsible for “creating, through deliberate indifference, a known hazard of countless rental homes within the Town of Southampton including the home in question, which the respondent knew or should have known were being rented without having passed the requisite safety inspections.”

The town’s conduct, he charged, “created and allowed to exist a trap-like condition at the aforesaid premises resulting in the catastrophic losses set forth herein.”

Southampton Town attorney James Burke responded Tuesday by email, saying, "The town has tried to be as cooperative as possible with assisting the family, and I believe Mr. Alonso would agree. There have been no specific claims that the town can respond to at this time and we will continue to help the family as much as possible where we can.”