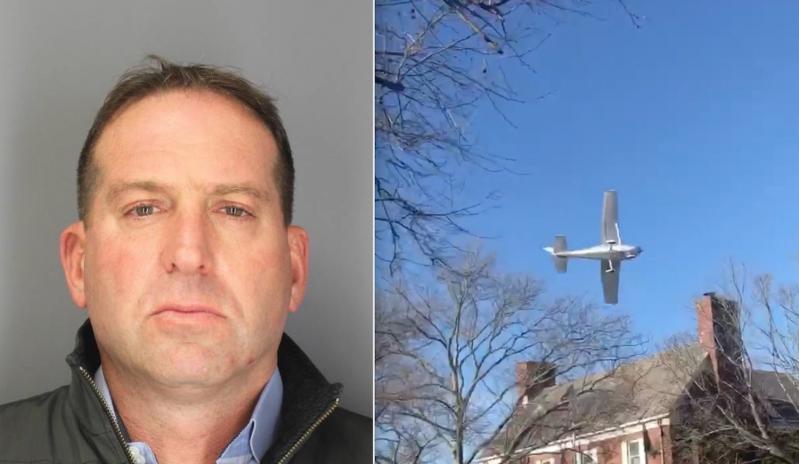 David Wisner, the 48-year-old Sag Harbor resident who flew his single-engine airplane in what local police have called "a dangerous and reckless manner over Sag Harbor Village," turned himself in to police there on Friday and was charged with second-degree reckless endangerment, a misdemeanor.

Mr. Wisner has since been suspended for 90 days from using East Hampton Town Airport, Town Councilman Jeff Bragman said yesterday. Mr. Bragman is the board's liaison to the airport.

On April 13, people out and about and even indoors reported being frightened when Mr. Wisner, the owner of Springs Auto Collision on Springs-Fireplace Road in East Hampton, buzzed over the village at altitudes as low as 50 feet above houses and businesses. He was to have been arraigned in Sag Harbor Justice Court on Friday following his booking at police headquarters, but the arraignment was postponed to May 7 because of a scheduling issue.

The April 13 flyby was promptly reported to the Federal Aviation Administration. Sag Harbor Village Police Chief Austin J. McGuire said Tuesday that he had no updates on the F.A.A. proceedings. "I'm sure it moves a lot slower than we do. He probably has the rights to hearings," the chief said.

The charge of reckless endangerment in the second degree is levied when a person is alleged to have engaged in "conduct which creates a substantial risk of serious physical injury to another person," which indeed was the worry of police and bystanders on April 13.

At the time, Chief McGuire, recalling that "9/11 was only 20 years ago," cited the "tremendous fallout" for "people who were really scared by this man." A bystander posted a video to Facebook of the plane swooping over the rooftops, which Mr. Bragman described as "startling" and "shocking."

It is unlikely Mr. Wisner will be able to fly during his 90-day airport suspension, because his plane, a single-engine Cessna 182, is parked at the airport.

Colin Asterita, his attorney, had no comment on the case this week. East Hampton Town Councilwoman Sylvia Overby said the board would likely discuss the incident further at its meeting on Tuesday.