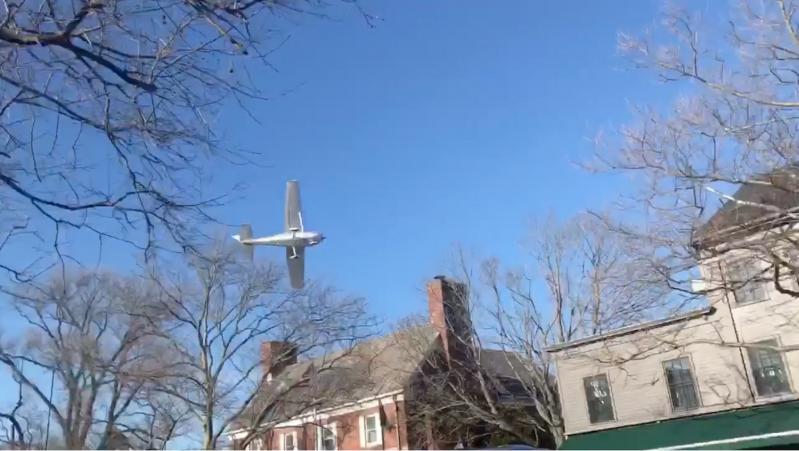 A plane that flew as low as 50 feet above houses and businesses in Sag Harbor last week and prompted numerous 911 calls, may lead to a criminal charge for its pilot, David J. Wisner of East Hampton.

At around 5:30 p.m. on April 13, a single-engine Cessna 182 shocked people in the Bay Street area when it repeatedly flew so low that many assumed it was an emergency or an attack. It turned out to be neither. Mr. Wisner was "surveying some property," his attorney said.

"I was terrified because what idiot would fly a plane that low?" said Sag Harbor Mayor Kathleen Mulcahy, who was sitting in her office at the time. When she didn't hear a plane crash, she figured the noise must have been someone's souped-up car.

"I think pilots that take people's safety into their hands that recklessly should have their licenses revoked," she said. "One miscalculation and that could have been catastrophic."

"This is a really unique incident," said Sag Harbor Village Police Chief Austin J. McGuire, "I know a lot of cops and have never even heard of anything like that." He said that the incident had consumed his past week.

Mr. Wisner, the owner of Springs Auto Collision on Springs-Fireplace Road in East Hampton, was reported by Sag Harbor police to the Federal Aviation Administration for the stunt in his aircraft. The F.A.A. can issue fines or revoke a pilot's license, said Chief McGuire. "I just felt that this guy should have some sort of penalty besides just that," he explained.

Chief McGuire said that he expected Mr. Wisner to be charged with reckless endangerment.

Colin Asterita, Mr. Wisner's attorney, will surrender his client if and when he is charged, Chief McGuire said. Mr. Wisner will then be arraigned and released.

"Although I don't have an explanation for his actions I can definitely say there was nothing nefarious about his intention," Mr. Asterita wrote in a statement for the press. "It was clear from our conversation that he is very sorry for any distress caused by this event and he takes full responsibility for his actions."

"Nine-eleven was only 20 years ago," Chief McGuire said, with regard to the "tremendous fall out" for "people who were really scared by this man." Chief McGuire also said that someone in Springs had reported similar activity from the plane before it reached Sag Harbor.

A Sag Harbor police officer used a smartphone app to identify Mr. Wisner as the Cessna's owner and was able to call him while the plane was still in the air.

Officer Kelly Anderson, who punched in its tail number into the Flightrader24 app, reported that Mr. Wisner told her "he was having a little fun." The first time he answered her call, she heard engine noise, and then the call cut out. When they next spoke, he had just landed at East Hampton Airport. "So he was on the phone and flying a plane," Chief McGuire said.

East Hampton Town Supervisor Peter Van Scoyoc said during a town board meeting last Thursday that the "phones lit up at the airport manager's office, and many callers were other pilots appalled at the display." The town, he said, is "pursuing all options and ensuring that the party involved is addressed in a manner consistent with the law."

Councilman Jeff Bragman, the town board's liaison to the airport, referred to the "startling" and "shocking" video one bystander, Aubrey Elizabeth, had posted on Facebook, and said that he had been in contact with the airport manager, Jim Brundige.

At a town board work session on Tuesday, Mr. Bragman discussed a recent meeting of the Airport Management Advisory Committee. "The local pilots were shocked and pretty unhappy about it. They know full well it's bad for their reputation and they do try to fly safe and quiet," he said.