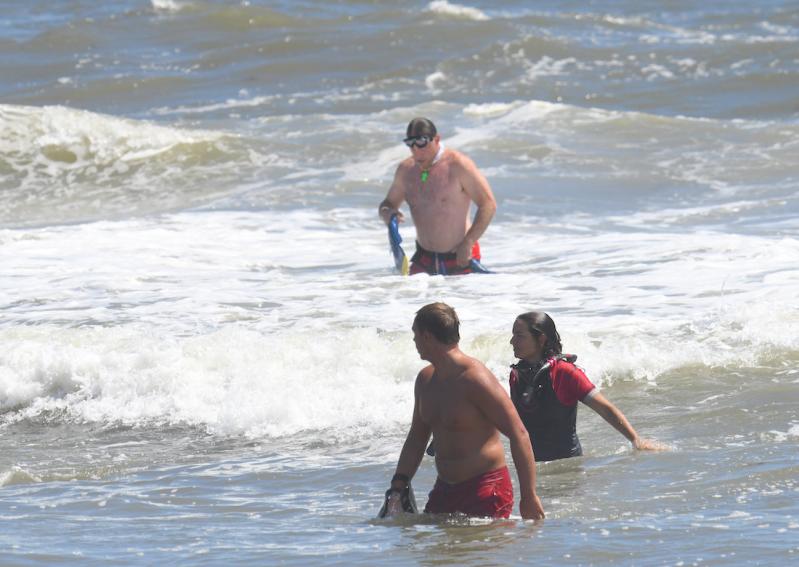 The body of 23-year-old Byron Kim of Brooklyn, who disappeared in a rip current on Aug. 18 while swimming with friends near the Windward Shores resort on Napeague, was found last Thursday afternoon by a swimmer, who pulled the body from the water near the Ocean Vista Resort, about a half-mile east of Windward Shores.

"We knew we'd find him either washed up, or on the sandbar, or in the trough, but the one thing we didn't want, unfortunately did happen. We didn't want somebody to stumble across him," said John Ryan Jr., East Hampton Town's head lifeguard.

Tiff Bryant, 23, also from Brooklyn, was on the beach with Kim and a group of friends the day it happened. Bryant managed to muscle through the rip, known locally as a sea puss, and make it back to shore to get help for Kim and another friend, who was successfully rescued. "It was the hardest thing I've ever done."

The three friends, who lived on the same floor during their freshman year at New York University, were bobbing about in the ocean, standing waist deep in the water and letting the waves wash over them, when a rogue wave knocked them down and pulled them under. "Then we were really, really far out. We could barely see our friends on the shore and couldn't touch the bottom of the ocean floor," Bryant said. The third swimmer went under.

"We were trying to get him back to shore. I realized that it wasn't possible for the three of us to get back together, and things were getting serious. I told them to stay together. I swam back to shore to tell someone, to alert someone. I was on varsity swim team as captain in high school, and I'm a very able swimmer, but it took everything out of me to try to get back to shore." Bryant said Kim had been a good swimmer, too; they had often been to the beach together.

"I left him in the water to go get help. I told him it was going to be okay."

Meanwhile, another member of the group of friends, who asked not to be identified, ran into the ocean to help, along with a bystander on the beach who happened to have a flotation device. Between them they pulled the drowning friend, who has also requested anonymity, out of the water.

Back on the beach, Bryant, who uses the pronouns they and them, "ran up and down seeking help." Bryant ran into the resort's pool looking for a lifeguard, but there were none. "I personally feel like I failed. I'm very, very frustrated that I really tried and did my best to find someone and nobody was there." It took a while to make in-person contact with anyone on the beach or at the resort who could help before first responders arrived.

A nurse who happened to be on the beach, along with one of the first medics to arrive, administered oxygen to the friend, who had blue lips, but was eventually resuscitated.

The group was not swimming directly in front of the resort but to the east. In any case, oceanfront hotels and motels are not by law required to have ocean lifeguards. Mr. Ryan despairs of that fact.

"Hotels are putting people in a dangerous position," he said. "It definitely needs to be addressed."

Beachfront hotels, he said, provide "every bit of amenity to people on the beach: towels, chairs, umbrellas — inviting people to come down there, and you look out at that beach and you think, 'They're not going in that water?' You know damn well they're going in the water, and no lifeguard. That's something that I hope gets changed quickly. We have enough lifeguards out here. We train more guards every summer. We can handle that part of their problem."

The East Hampton Ocean Rescue and Lifeguard Association tirelessly searched for the missing swimmer when the call came in that afternoon at 12:19 p.m. "We proceeded to do four, five, six searches combing the area, and obviously to no avail unfortunately," said Bob Pucci, chief of Ocean Rescue, who was on the scene the whole time. Searchers in two lines of 10 went dove as far as 16 feet even as conditions worsened.

The changing tide did not pull the victim to shore as they hoped, and the search was called off at 4 p.m.

The search teams reconvened at daybreak with the help of East Hampton Town Marine Patrol side-scan sonar to continue in a grid pattern. There was help again from Ocean Rescue swimmers, state police with a drone, an East Hampton Town police dive team, and the county sheriff's office, all of whom worked from 6 a.m. to around noon, on what by then had gone from rescue to recovery effort. When the in-water search was suspended that afternoon, they continued patrolling on shore, and were still doing when Kim's body was found. Mr. Ryan and Mr. Pucci were patrolling the beach at the time and were there for the recovery.

By chance, Tiff Bryant was there also.

The friend who had been pulled from the ocean had spent two days at Stony Brook University Hospital, Bryant explained. "I went home to Brooklyn and came back to pick him up. Since we were already there anyway, we just kept driving and went back to visit the beach for closure. We were just at the spot that I had been, and grieving, when someone came up to us and told us that they had found something farther up on the beach. We ran there."

The beach there has no cellphone reception, which Bryant was aware of on the day of the drowning because the call to 911 wouldn't go through immediately.

Last Thursday, Bryant overheard an East Hampton Town detective say he was "having trouble calling to let anybody know that the body was found."

Bryant, who had known Kim for six years, was the one who identified his body, though not at the scene.

"The detectives took me and my friend elsewhere and showed photos, and both of us know his tattoos pretty well." The skin, they said, was "unbroken."

While still heartbroken, Bryant said that knowing Kim's body had been found "did give me a sense of comfort to know that he wasn't lost at sea. I really don't know many people more loved than he is."

In areas with no lifeguards and no flags to indicate surf conditions, Mr. Ryan had a final word for ocean swimmers: "In an unprotected area, the flag color is always red," for dangerous conditions.
--
Correction: An earlier version of this story incorrectly identified the town detective who was at the beach the day Mr. Kim's body was recovered. It was not Detective Sgt. Daniel Toia. The date of the original incident has also been corrected.