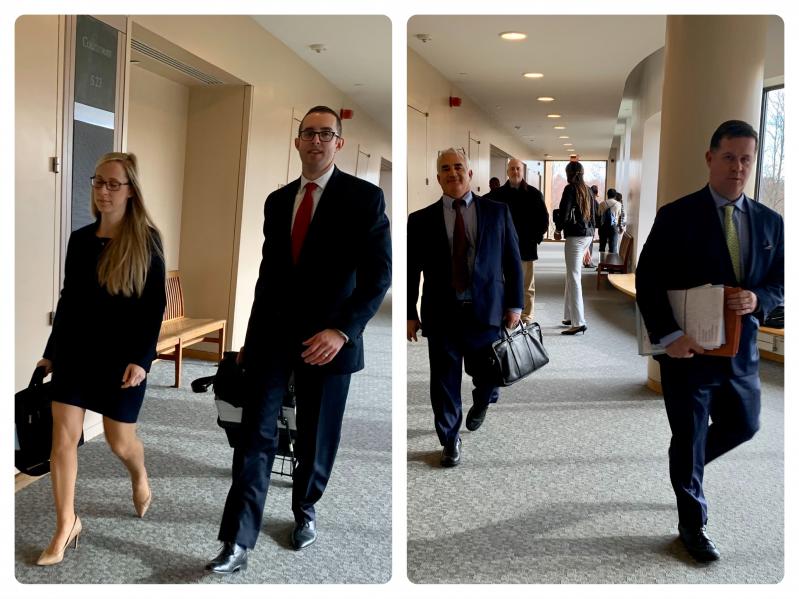 Eric Aboulafia and Katharine D'Aquila, prosecutors, leave Central Islip Criminal Court on Wednesday after closing arguments in the murder trial of Patchita Tennant. Her defense lawyers, right, are Austin Manghan and Matthew Tuohy. The case will soon be in the hands of the jury.
Taylor K. Vecsey
By Taylor K. Vecsey

Patchita Tennant broke down in tears on the witness stand Wednesday morning as she recounted the months leading up to the night when she shot and seriously injured her longtime boyfriend.

Whether the jury will believe her story about which of them the handgun belonged to and who was the aggressor that September evening, or the one Andrew Mitchell told, remains to be seen. The jurors heard closing arguments from both sides on Wednesday afternoon.

When criminal court reconvenes in Central Islip Thursday, Judge John B. Collins will instruct the jury, identifying the issues the 12 members will need to decide and helping them understand the legal principles involved. Ms. Tennant is charged with attempted murder, one count of assault, and criminal use of a firearm in the first degree, all felonies. She faces 8 1/3 to 25 years in prison. A lesser charge of assault was dismissed before the trial.

"How did you fire the revolver at Andrew Mitchell? " Eric Aboulafia, an assistant district attorney, asked on Wednesday morning as he began his cross-examination of Ms. Tennant. Steering her away from speaking of Mr. Mitchell's transgressions and romantic dalliances, he homed in on the evening of Sept. 5, 2019. "How did you squeeze the trigger?"

She struggled to answer. "Sir,” she said, “when you're scared for your life . . . I don't know what force I squeezed the trigger with."

With a few exceptions, she stuck to the story she’d told the day before: that the gun, an unregistered RG revolver, was Mr. Mitchell's,  and that he brandished it while screaming at her to get out of the Flanders house they’d shared for years. Asked if she’d seen Mr. Mitchell bleeding, she said she remembered seeing blood on white tile. Mr. Mitchell had testified he was in the bathroom when she aimed at him; she said the shooting happened in their bedroom nearby.

Ms. Tennant denied she was jealous, although she suspected he was cheating on her with at least one woman, and had seen him on a G.P.S. tracking device making frequent visits to one particular house in Riverhead. She acknowledged having hidden the device under a mat in his pickup truck.

Dee Muma, the owner of that house, which Mr. Mitchell was renting for a woman whom he’d brought to the United States, had told the court she’d seen Ms. Tennant in a small sport utility vehicle near the cottage on Sept. 4, the day before the shooting, looking upset. Ms. Tennant denied it: "She was 100 percent wrong." She said she’d worked late that day at the CVS in East Hampton, where she was a manager.

In his closing argument, Mr. Aboulafia told the jury, "His unfaithfulness does not give her a license to kill."

"Let's talk about the numbers," he said. "Three wires cut. One tracking device . . . over 400 ounces of bleach. Five gunshot wounds to Andrew Mitchell. One scratch to the defendant. One live round ammunition in her purse. One getaway car. Three liters of water. One TracFone. One new shirt. One minute card for that TracFone. One woman scorned and one man left for dead, and you know it."

He said there was no possible way Mr. Mitchell, with a collapsed lung, could have gone about “planting” items that would incriminate Ms. Tennant after the shooting. as the defense claimed.

The prosecution called almost 20 witnesses in all, while the defense called only two.

"This case really comes down to two people; Andrew Silas Mitchell and Patchita Tennant," said Matthew Tuohy, an attorney for the defendant. This was a simple case of self-defense, he continued, "in a life-or-death situation and with so much on the line.”

“If you believe my client and don't believe Mr. Mitchell, you'd have to find my client not guilty."

Mr. Tuohy called Mr. Mitchell a habitual liar. "He actually lied to you guys," he told the jury. Mr. Mitchell had denied any physical violence in the relationship, he pointed out, though Ms. Tennant had described in graphic detail how he caused her to miscarry in 2013. "I don't think anybody here believes she was making that up," he said.

Ms. Tennant had been abused, mentally and physically, for years, Mr. Tuohy said. “Domestic violence is a tricky thing," he said, cautioning the jury not to read too much into the fact that she stayed in the relationship for nearly 20 years. And, he said, just because she was using a G.P.S. tracker to document Mr. Mitchell’s whereabouts and had complained to friends that he had another woman and neglected her and their daughter, it did not mean she planned to kill him.

She lost her head after the shooting and drove off, not knowing where she was going. "That doesn't mean she's guilty by any stretch of the imagination," Mr. Tuohy said. If she could go back in time, she would not have fled, but stayed to tell police her side of he story.

"Silas is a habitual liar,” he concluded, as the jury watched and listened. “It was his gun — and I think you know it."