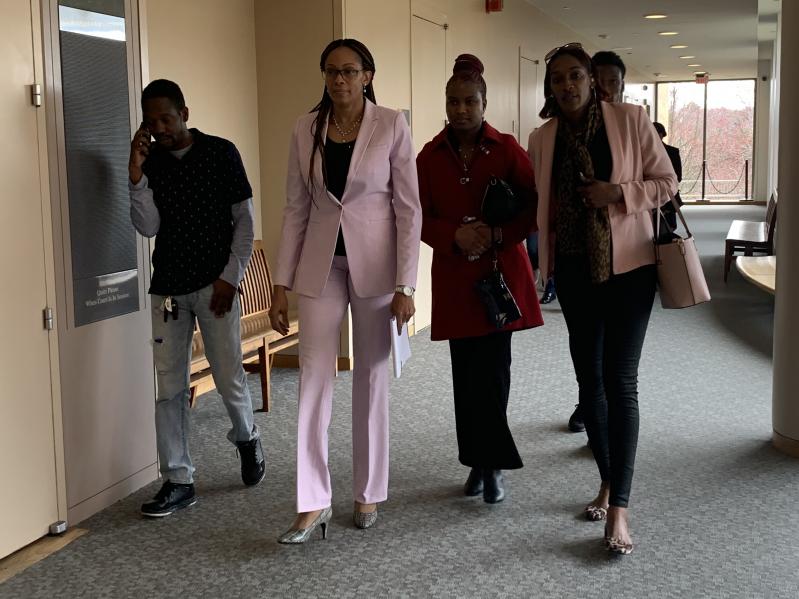 Patchita Tennant left the courtroom with her family members and supporters for a lunch break after testifying in Central Islip on Tuesday.
Taylor K. Vecsey
By Taylor K. Vecsey

It was an emotional day in court on Tuesday as Patchita Tennant took the stand to tell her side of what happened the night she shot her boyfriend, Andrew Mitchell.

Ms. Tennant, the longtime manager of the CVS on Pantigo Road in East Hampton, said it was he who started an argument and pulled a gun on her in their Flanders home on Sept. 5, 2019. She denied that she’d planned to kill Mr. Mitchell, who had acknowledged several infidelities during his own testimony, but admitted she planned to leave him and fight for custody of their young daughter.

After finishing work, Ms. Tennant testified, she went home to 492 Pleasure Drive, expecting her 3-year-old, Vanessa, to be there with the babysitter, Floria Bautista. She called the sitter, who said she was in Riverhead. Ms. Tennant, who planned to spend the evening at her sister's house in Riverhead, told the sitter she would meet her there.

She changed her clothes and began the drive, but saw Ms. Bautista's car on Pleasure Drive and called her to pull over so she could get Vanessa. Ms. Bautista testified last week that Ms. Tennant seemed to be in a rush.

After arriving at her sister's home, Ms. Tennant said, she realized she’d forgotten the child’s diaper bag. She left Vanessa, who was playing with cousins, with her sister and drove back home, deciding as she drove to spend the night at the sister’s. It was already well after 7, and the next day, Friday, was her day off, when she took Vanessa for swimming lessons in Riverhead.

When she got home, Mr. Mitchell was there. She left her pocketbook and shoes by the front door, but took her keys and cellphone upstairs. Mr. Mitchell was but standing outside the bathroom, she said.

"Where is Vanessa?," he asked. At her sister's house, she replied. (Mr. Mitchell had testified that in fact she told him the child was asleep outside in her car, which led to an Amber Alert issued after the shooting.) She then told him she planned for the two to sleep there that night.

She said he grew angry. "Floria is more of a mother to Vanessa than you," he allegedly said.

Ms. Tennant said she did not want to argue, and just wanted to get into the bathroom to retrieve a scarf.

"I don't know why you don't get the fuck out," he said, according to her testimony.

She repeated she just wanted to get past him to the bathroom and he said, "Who the fuck do you think you're talking to?" and allegedly pushed his hand into her face. She fell backward onto the bed. She then cursed back at him, she said, and he went into the bathroom and locked the door.

She kicked the locked door,  breaking the jamb. He then unlocked it, she testified, shouting, "I'm going to fucking straighten you out."

While she grabbed her scarf, he went to his closet, and, she said, came out with a gun in his hand. They struggled. "Then I heard 'bang,' like the gun went off."

"For me, when you pull a gun on someone you're going to use it," she said.

She said she pushed Mr. Mitchell and he toppled over a chair. The gun fell on the floor and she bent to grab it before he could get to it. She admitted to standing over him and pulling the trigger. "All I know is, I just kept pressing."

She described being in the corner of the room,  by the bathroom door, "pinned" by a side table. He kept coming toward her, she said, as she squeezed the trigger.

The sound of the gun made her feel like her "head was going to explode."

"I'm bleeding," he shouted. He grabbed her and they struggled. This time, he got hold of the gun. She "scooted" across the bed, she said, and dashed out of the room, leaving her keys and cellphone behind. He followed, gun in hand, as she ran down the stairs.

"He kept click, click, clicking and I kept running," she said. There were no more bullets in the gun.

She grabbed her pocketbook by the front door, but then, "panicked,"  ran barefoot out the back.

As she ran for her car, she said, Mr. Mitchell screamed at her from the deck: "I'm going to fucking straighten you out. I'm going to kill you."

She’d left her keys in the house, but her Hyundai Santa Fe lit up as she came close. That meant she had a spare key in her purse. Before she drove off, she heard Mr. Mitchell yelling out a window above that he had been shot. Ms. Tennant drove away.

Mr. Manghan asked her whether, at any point, she’d  threatened to kill Mr. Mitchell because he had not married her, as he had testified. "That never happened," she said.

In fact, Ms. Tennant disputed that she needed marriage in order to become a legal resident of the U.S., saying she already is a permanent resident.

She denied planning to kill Mr. Mitchell, or planning to get a pistol permit. (The prosecution had submitted in evidence a text from a former colleague of hers, Martin Kaufman, with the address of the pistol-licensing bureau in Yaphank, sent just a week before the shooting.)

Mr. Kaufman was the first witness for the defense to take the stand. He explained that he had been trying for years to convince Ms. Tennant to go shooting with him. "I feel terrible about the fact that  it looks bad," he said during cross-examination.

Ms. Tennant told the court she was scared as she drove away after the shooting and didn't know who to turn to or what to do. She drove to a CVS on Route 111 in Manorville, where surveillance video shows her rushing in and buying a TracFone with pre-paid minutes, a jug of water, and a shirt. Back in her car, she testified, she couldn't figure out how to use the cellphone or charge it quickly.

She had thought of calling 911, she said, but believed Mr. Mitchell would lie about what had happened. She added that she had no idea how bad his injuries were (A surgeon had described them as life-threatening).

She kept driving and made it to Route 25, unsure where she was. She looked for pay phone booths without success. "I just sat in the car. I was confused. I was crying."

Finally she stopped at a gas station and asked to use the phone, dialing a friend and co-worker at CVS. "Ana, I think I need you," she said, crying.

Ana drove UpIsland to find her. Hours went by. Mr. Tennant  called Ana again, this time from a fast-food restaurant. They met in a shopping center parking lot in the early morning hours. Police later found her S.U.V. in that lot.

With Ana's help, they found Mr. Manghan, the lawyer, who arranged for Ms. Tennant to turn herself in.

During her testimony, Mr. Manghan suggested Mr. Mitchell planted items around the scene. Ms. Tennant testified that she’d left her keys and cellphone on a dresser, by the TV set when she ran out of the house. Police a pair of gloves on the dresser that she said were not there when she left her phone.

Police found her keys in a small Gucci bag next to the dresser; she testified that the bag had been in her closet. Inside the bag was a single bullet, wrapped in tissue paper. Her fingerprints were not found on any of the bullets.

The prosecution has tried to make a case that she left that bag behind as she fled. However, in surveillance video taken at the East Hampton CVS earlier that day, she was carrying a different bag, the same one she later carried into the Manorville CVS.

Ms. Tennant also had an answer for her purchases earlier in the day at the East Hampton CVS -- four bottles of bleach, bottle of Resolve carpet cleaner,  and a Tide pen stick. The prosecution claimed the items were part of a murderous plan. She said, however, that she needed the bleach to clean the deck, the carpet cleaner to clean a stain on the carpet, caused when a bottle of cherry liquid Tylenol spilled the night before, and the pen stick to get rid of stubborn stains on her daughter's church dresses.

The couple had been together 19 years, having met when Ms. Tennant came to East Hampton from Jamaica on a work visa. She first worked at the Amagansett I.G.A., then Bucket's Deli in East Hampton Village, before getting a job as a clerk at CVS. The store was said to have become the  highest-volume CVS on Long Island under her direction, and among the top 10 in the country among 7,000 stores.

Ms. Tennant said she was first attracted to Mr. Mitchell because he was “charming, educated, and a hard worker.” But, she said, he grew controlling, lied, and was abusive, both physically and verbally. She denied allegations that she had been aware he was married, during their relationship, for four years to another woman in Indiana. She said she found out last summer, after finding divorce papers.

In recent years, she said, he criticized her parenting and monitored her movements through a Nest indoor camera, even during his frequent trips out of the country. Because of that, she  cut the wires on the cameras a month before the shooting, she said.

She said he slapped her for the first time in 2008. They separated, but she went back to him. She described finding him beating his son, who was living with them, with a baseball bat two weeks after the birth of their daughter. When it happened again, the son left to live with his mother.

She blamed Mr. Mitchell for a miscarriage in 2013 after he "grabbed me and slammed me up against the refrigerator." She recounted in graphic detail, experiencing the miscarriage hours later in the bathroom at the CVS.

Her niece Kamishka O'Connor, who was working there as well, was with her at the time. Ms. O'Connor became overwhelmed with emotion in the courtroom and ran out.

By the time Ms. Tennant left the stand, around 4:30 Tuesday afternoon, she was visibly unsteady on her feet. Outside the courtroom, with family members supporting her, she broke down and cried.

On Wednesday, the prosecution will cross-examine her. Closing arguments will follow, and  the jury is expected to begin deliberations on Thursday.