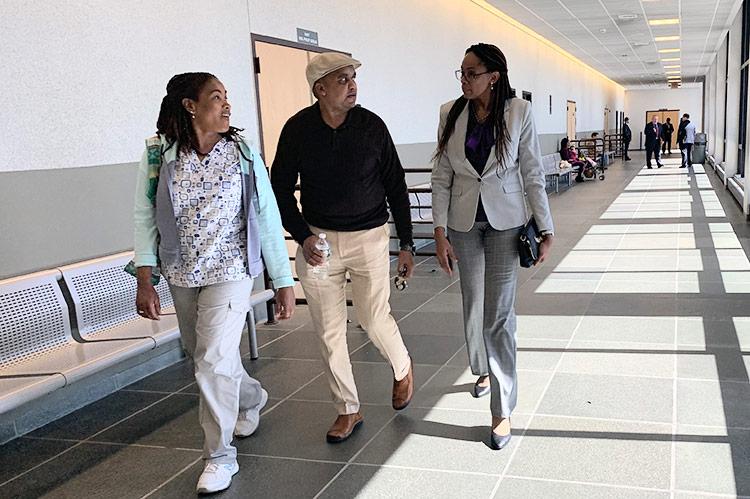 Eric Aboulafia, the Suffolk County assistant district attorney prosecuting Patchita Tennant on attempted murder charges, began his argument on Monday with a question to the jury: “What does it feel like to have these words aimed at you: ‘I’m going to kill you, then kill myself’?”

“Andrew Mitchell knows what it feels like,” Mr. Aboulafia continued, pointing at Ms. Tennant, who sat quietly with her lawyers. He said they were “words and actions born out of jealousy, humiliation, and rage.”

The D.A.’s office claims Ms. Tennant, a well-liked manager at a CVS East Hampton branch, planned to kill Mr. Mitchell, her longtime boyfriend, because she was upset he had not yet married her and was cheating on her with a woman he had met overseas and brought to the United States.

Six witnesses for the prosecution took the stand in Judge John B. Collins’s Riverhead courtroom before the end of the day. They took the jury, nine women and three men, through the night of Sept. 5, 2019, when Ms. Tennant fired three shots into Mr. Mitchell in their Flanders home. An Amber Alert was issued for their then 3 1/2-year-old daughter, who was found safe with family members the next morning.

On the day of the shooting, Mr. Aboulafia said, Ms. Tennant bought “a significant quantity of cleaning materials” — four bottles of  bleach — at the Pantigo Road CVS where she worked, implying that she intended to use them that evening in an overall plan to end Mr. Mitchell’s life. He painted her as the aggressor during the couple’s argument that night, saying she had “busted down” a locked bathroom door to shoot him.

He described her as “calculated.” As her wounded boyfriend was calling 911 for help, he said, she drove to a CVS in Manorville and bought a disposable cellphone, a large container of water, and a new shirt, because she had blood on the one she was wearing. The purchase, he said, took “four minutes, and then she’s gone.”     As for the defense’s assertion that Ms. Tennant was a victim of domestic violence, the prosecutor said simply, “It didn’t happen.”

Matthew Tuohy, representing the defendant, told jurors, “At the end of the day, there’s Mr. Mitchell’s story and my client’s story.” He called Mr. Mitchell “a controlling, scheming, manipulative guy,” and charged that he was abusive — “not all the time physical, but sometimes.”

Ms. Tennant, he said, will testify that she was scared and left her cellphone behind when she ran from Mr. Mitchell, who by then had possession of the gun. As for the cleaning products, “So what?” She would explain it when she took the stand, he said.

On Monday afternoon, jurors heard a recording of the nearly 10-minute call Mr. Mitchell made at 8:22 p.m. “I’ve got three bullet holes in me,” he told the Southampton Town police dispatcher, Courtney Dombkowski, who took the stand. Mr. Mitchell told her Ms. Tennant had shot him because he was “cheating” on her and that he “wrestled” the handgun away from her. However, Ms. Dombkowski testified under cross-examination, he never said she was going to kill him or kill herself.

When Officer Robert McCoy arrived at the house at 492 Pleasure Drive, he drew his gun. He was uncertain, he said on the stand, whether Ms. Tennant was still there. He found Mr. Mitchell in the doorway, bleeding from his chest, wearing only boxer shorts. Mr. Mitchell collapsed into his arms on the stoop, the officer said. Pressed by Mr. Tuohy about what Mr. Mitchell said to him, the officer said he was not there to interview the man, but to administer first aid and make sure the scene was safe.

Officer McCoy and Sgt. Herbert Johnson followed a trail of blood from the front door and up the stairs, where they found an RG Model 40 .38-caliber revolver in the master bathroom, on the vanity counter next to Mr. Mitchell’s razor. Sergeant Johnson testified that the gun was cocked with the hammer in the rear position, “meaning it was ready to fire.” He said he “decocked the revolver to make it safe so it wouldn’t go off.”

A Stony Brook University Hospital flight paramedic, Alex Calabro, who transported the victim to the level-one trauma center, testified that he had five bullet holes in him: in his right back, right arm, right upper chest, left lower chest, and left biceps. Mr. Calabro said he thought Mr. Mitchell might have a collapsed lung, which turned out to be the case. He underwent a three-hour life-saving surgery.

Both sides told the jurors they would need only common sense to render a just verdict.

“As terrible as his injuries were, as bad as they are, you’re going to believe my client and find her not guilty,” Mr. Tuohy said.

Three more witnesses took the stand on Tuesday. First was a woman the couple had hired to clean their house and care for their daughter, Floria Nicholas Bautista, a Mexican immigrant who spoke in Spanish with the help of an interpreter. Visibly nervous, she looked at the floor most of the time.

The prosecution established that Ms. Bautista always bought whatever she needed to clean the house and gave Mr. Mitchell the receipts for reimbursement. On the morning of Sept. 5, she arrived at the house around 7 a.m. to watch the child, Vanessa. At about 3 p.m., unable to find anyone to pick up her own daughter from a Flanders school bus stop, she took Vanessa with her to go get her. They then went back to her own house, nearby, for several hours. As they were headed back to the Tennant-Mitchell house, around 7 p.m., Ms. Tennant called, telling Ms. Bautista to pull over on the side of Pleasure Drive and she would soon be right behind her. They were only two to three minutes away from the CVS manager’s house, Ms. Bautista testified.     The cleaning woman mentioned she still had a load of laundry to finish, but Ms. Tennant, she said, told her not to worry about it. She also told Ms. Bautista not to come to work the next day, as she herself was planning to take the day off to take her daughter to a swimming lesson.

Ms. Tennant was in a rush, Ms. Bautista testified. She tried to hand her a diaper bag that had Vanessa’s clothes in it, but she drove off before she could. She seemed tired, stressed out, fatigued, and nervous, Ms. Bautista said.

A few hours later, police called her to say Vanessa was missing, and asked for her help. She gave them a photo of the child, whom she has cared for since she was born, and a description of the clothes she was wearing. “Vanessa is my daughter. I love her very much,” Ms. Bautista told the court through the interpreter. “That night, I did not sleep.”

On cross-examination, Mr. Tuohy asked Ms. Bautista to describe Mr. Mitchell. She said he was “very neat and a straight man,” who was “very strict.” She recalled that he had scolded her once when the child almost fell down the stairs, and it made her cry. If he called and heard Vanessa crying, he wanted to know why. Ms. Bautista testified there were three security cameras in the main living area. “It’s fair to say that Silas [his nickname] kept an eye on you and an eye on Vanessa?” Mr. Tuohy asked.

Asked to describe Ms. Tennant, Ms. Bautista said she was calm, a loving person who listened to her problems.     The next witness was Detective Robert Stabile, who processed the crime scene on the night of the shooting. He discussed the gun and its ballistics in detail, though the prosecution has yet to establish which of the pair actually owned it. There has been no mention of its being registered. One round of live ammunition was found in the bedroom, wrapped in tissue paper in a brown purse belonging to Ms. Tennant, the detective said.

Mr. Stabile displayed some 40 photographs of the crime scene to the jury, showing blood splatters throughout the bathroom and bedroom, then down the stairs to the front door, where Officer McCoy found Mr. Mitchell. An earring was found on the floor in the bathroom, amid blood. The door jamb into the bathroom was pushed in. A lamp, knocked off a nightstand, lay on the bed. There was blood on a scarf and on an armchair.

Detective Sgt. Lisa Costa, the last witness on Tuesday, described how police found Ms. Tennant’s 2018 Hyundai Santa Fe the next morning, abandoned in a parking lot in Middle Island. An anonymous caller had alerted police to the car’s whereabouts after hearing the Amber Alert.

Searching the sport utility vehicle for evidence, police found a receipt in the back seat for the supplies purchased at the East Hampton CVS the day before: Tide ToGo Minis, a six-pack of paper towels, four jugs of bleach, and carpet cleaner. Jurors were showed the receipt, for $94.61.

Detective Costa’s department received a call from Riverhead Town police that same morning, she said: “Hey, I have good news. I have your kid.” Ms. Tennant’s sister Carol had taken Vanessa to their headquarters. Vanessa “was completely healthy and with her aunt,” the detective testified.

Carol Tennant and her niece Kamishka O’Connor then took Vanessa to Southampton Town police to answer more questions. It was established that the child was not with her mother when the shooting occurred.

Also thanks to the Amber Alert, police learned that Ms. Tennant had been seen in the Manorville CVS the night before. An employee there recognized her, Detective Costa said, explaining that they used to work together.     By 11:35 a.m. on Sept. 6, Southampton detectives got a call from a lawyer, Austin Manghan, who said he was representing Ms. Tennant and would bring her to headquarters that afternoon. They arrived at about 1 p.m., and she made no statement.

Police photographed her and asked if she had any injuries or was in pain. She said no, Detective Costa testified. The only injury they found was a small laceration on her right knee. The photographs of her were shown to the jury, out of view of others in the courtroom.

Mr. Tuohy did not cross-examine the detectives.

The trial was not in session yesterday. It is scheduled to continue today.