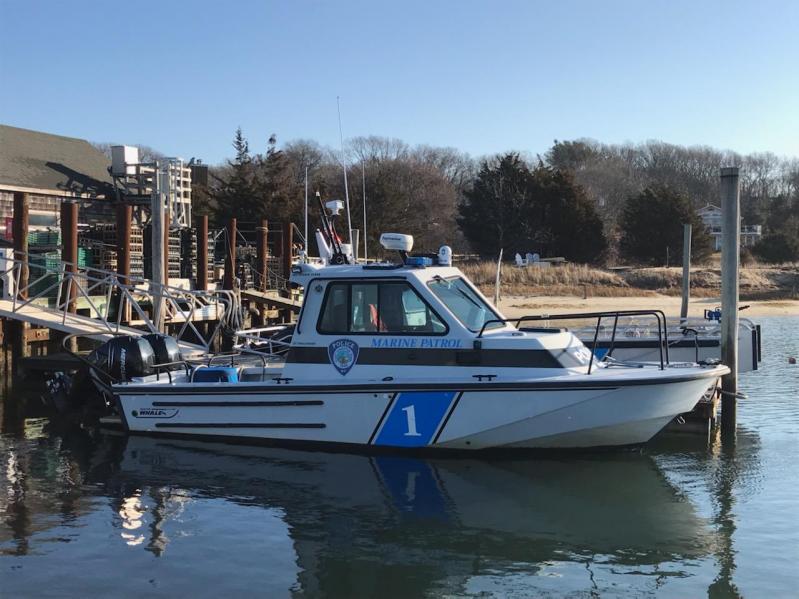 Marine patrol officers hopped on Marine 1 at the Gann Road docks when two hunters need a hand. The officers are "real heroes," one of the hunters said.
Ed Michels
By Taylor K. Vecsey

On New Year’s Day, fighting against imminent darkness and weather, East Hampton Marine Patrol officers rescued two duck hunters stranded in their boat off Louse Point in Springs and holding on to a navigation buoy.

The two were aboard a 14-foot 2014 Polar Kraft aluminum boat when its outboard engine died, according to Chief Harbormaster Ed Michels. They tried to anchor the boat, but the anchor broke loose and they began drifting out into Gardiner’s Bay. “By the grace of God or whatever they did, they got to Buoy Number 8 and hung on,” Chief Michels said.

Marine Patrol got the call for help at about 4:30 p.m. While it had been a beautiful day with temperatures in the 40s, winds were gusting as night fell. A small craft advisory and gale warning were in effect for the bay, according to the incident report.

Officers Tim Treadwell and Joe Vish, who were off duty, raced to the Gann Road docks, picked up Marine 1, a 28-foot Whaler, and headed for the south channel. They arrived at the buoy at 5:26 p.m.

The hunters, who were wearing personal floatation devices and carrying a portable V.H.F. radio, were brought safely on board. Their boat, which is registered to Stephen Turza of Springs, had no safety violations.

While the men, whose names were not released, were uninjured, Chief Michels stressed the need for haste. Had they drifted into the bay in the dark, the situation could have become serious.

The father of one of the two hunters drove to the shoreline on Gerard Drive and kept his vehicle’s headlights on them. Coast Guard Station Montauk also responded, arriving shortly after Marine 1. As Marine Patrol was heading back to Gann Road with the boat in tow, the waves were coming over the bow.