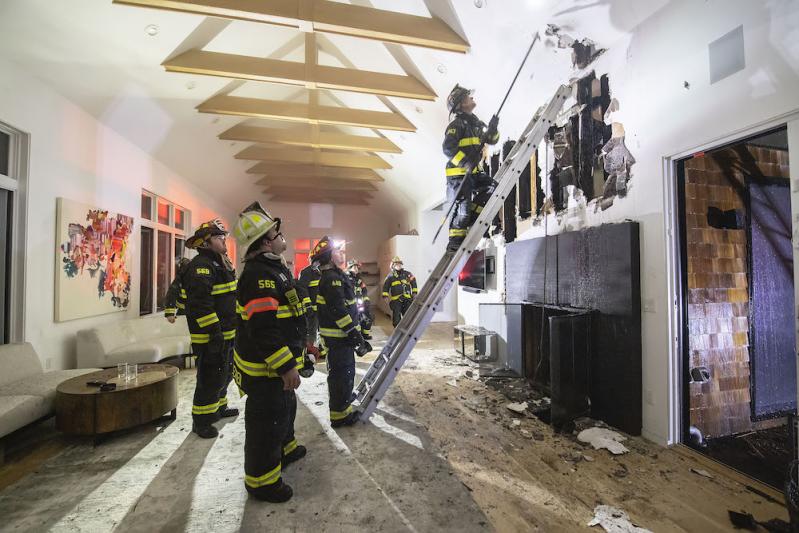 A fire that began in the basement ceiling of a house off Pantigo Road in East Hampton soon moved to the first floor and up the 20-foot wall to the ceiling, attic, and roof.
Michael Heller
By Bella Lewis

What the occupants of 370 Pantigo Road initially thought was the smell of leftover smoke from the fireplace just after midnight on Monday turned out to be a basement ceiling fire.

Due to the short delay placing the 911 call, the fire that originated in the vicinity of the fireplace soon climbed to the first floor and up the 20-foot wall to the ceiling, attic, and roof. The East Hampton Fire Department responded with three engines, one hose truck, one heavy rescue truck, and two tankards. The Amagansett Fire Department also lent its rapid intervention team and the Sag Harbor Fire Department stood by with a tower ladder at the East Hampton station as the East Hampton department's ladder truck is broken, said Chief Gerry Turza.

The visible fire was knocked down within 20 minutes, but responders remained until around 4:30 a.m. after combing the house for fire pockets by pulling drywall off the walls and ceiling. Chief Turza said the materials on the roof "were problematic, so firefighters had to use different techniques to open the roof, which with ladders becomes precarious." The home's long driveway off Pantigo Road required firefighters to use 1,000 feet of supply hose. The department also had to contend with holes the fire had burned in the floor. The house had been built just last year, according to the chief.

Tom Baker, East Hampton's fire marshal, was looking into the cause of the fire.