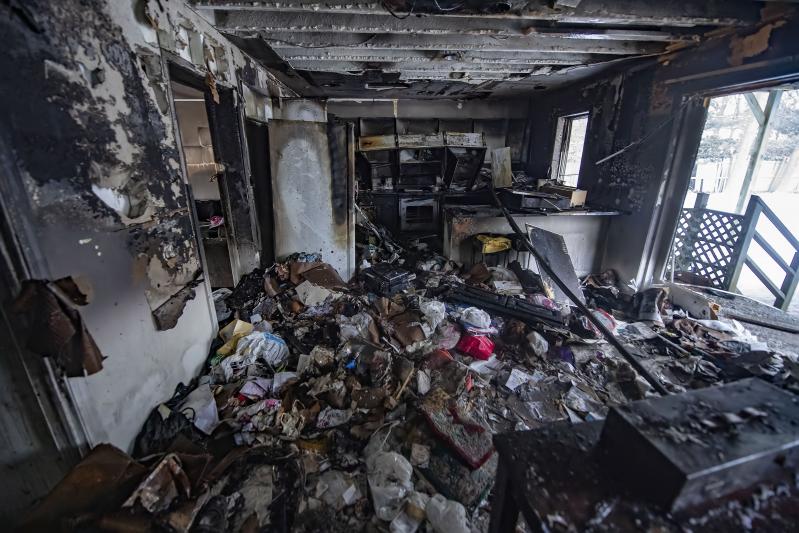 Firefighters had to contend with lots of debris inside a house on Cove Hollow Road in East Hampton that was on fire Saturday afternoon, Fire Chief Gerard Turza Jr. said.
Michael Heller
By Taylor K. Vecsey David E. Rattray

Update, 5 p.m.: A fire gutted an unoccupied house in East Hampton packed with boxes and debris on Saturday afternoon as firefighters were met with several unexpected challenges.

A passing jogger reported seeing smoke coming from the roof of the house at 38 Cove Hollow Road, between Buell Lane Extension and Route 114, just outside the village, at 12:58 p.m. A town police officer was first on the scene, followed by First Assistant Chief Duane Forrester, who told responding units flames were visible at the two-story house, which was about 2,000 square feet in size, according to Fire Chief Gerard Turza Jr. The windows were already beginning to blow out.

The house is set back from the street. The fire had been going for a while by the time the passer-by saw it, Chief Turza said. Firefighters were met with heavy flames on the first and second floors. He called for backup from the Sag Harbor Fire Department's rapid intervention team, which stands by in case firefighters inside need to be rescued.

The first engine could not make it all the way up the long driveway, as it was blocked by "a gigantic tree limb," the chief said. Firefighters stretched long hose lines to get water onto the house as quickly as possible, and then later cut up the tree so that equipment could get closer to the house.

The situation was compounded further when firefighters conducting an initial interior attack found boxes upon boxes and debris from the floor to the ceiling. "It made firefighting operations much more difficult," Chief Turza said. The challenges "made for a potentially dangerous situation," he added.

Fire officials did find a faded notice on the front door from East Hampton Town code enforcement. The chief said he could not read what the notice was for. It will be among the things that the East Hampton Town fire marshal's office, which is trying to determine the cause of the fire, will look into during its investigation.

The crews inside reported a possibly damaged and dangerous floor, and the chiefs withdrew everyone, instead attacking the fire from the outside. "A vacant house like that, it's not worth anybody's life," Chief Turza. "We regrouped and got a better handle on what we were doing."

A tower ladder helped firefighters with roof operations. Then they made another attempt at fighting the fire from inside. As it turned out, the floor did not collapse, but firefighters were crawling around on a floor full of boxes, the chief said. "There was so much debris and bags and boxes of clothes . . . everything appeared to be spongy, which is an indication of a floor compromise."

After the second interior attack, they were able to successfully extinguish the fire in all rooms.

Firefighters then methodically looked for hidden pockets of fire behind wet boxes and piles of clothes a couple of feet deep, a labor-intensive task. The Sag Harbor rapid intervention team was put to use for additional manpower, and the Amagansett Fire Department's intervention team was called in. Firefighters from the Springs department stood by at East Hampton's firehouse in case another call came in.

The residence is still intact, but "it's gutted inside," Chief Turza said. "We did have to cut a couple holes in the roof to inspect the attic."

The East Hampton Village Ambulance Association responded to the fire with two ambulances. No injuries were reported.

Originally: Flames tore through a house in the Cove Hollow Road section of East Hampton Village on Saturday afternoon.

The East Hampton Fire Department was called out just before 1 p.m. to a blaze that had smoke already coming through the roof. Firefighters were battling flames on two floors of the house, set back on a long driveway from the road.

Extra firefighters, trucks, and equipment were called from the Amagansett and Springs Fire Departments.

This story will be updated as more details become available.