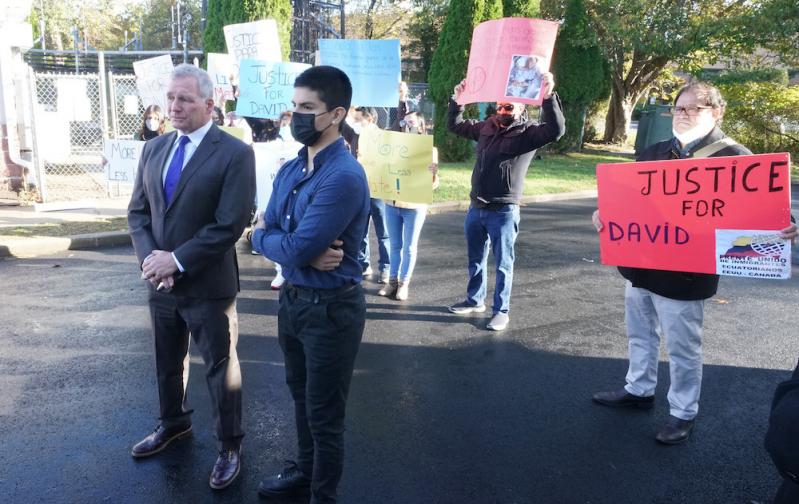 David Peralta and his attorney, Edmond Chakmakian, outside East Hampton Town Justice Court on Thursday with a crowd of Mr. Peralta's supporters behind them.
Doug Kuntz
By Bella Lewis

“In our view, today’s proceedings simply confirm what we have said all along — that Mr. Streep was innocent of both of the serious violent felony offenses with which he was charged. Mr. Streep is extremely grateful that both of the felony charges have now been dismissed. Mr. Streep is equally grateful that the District Attorney’s office rejected the misguided lobbying effort by Mr. Peralta’s counsel to have this case prosecuted as a hate crime. As with the original felony charges, we are confident that Mr. Streep will be fully vindicated of the reduced misdemeanor charges as well.”

Mr. Peralta’s lawyer Edmond Chakmakian, who is representing the victim in the civil case, responded to the decision.

“The assistant district attorney handling this matter stated today, in open court and on the record, that his office had reasonable grounds to believe that Streep committed two felonies.”

“In any event, whether these crimes are prosecuted on the misdemeanor or felony level, the fact remains that Streep’s violent assault left David Peralta-Mera with life-altering injuries," Mr. Chakmakian said. "Whether Streep’s violent outburst was motivated by hate, perceived privilege, or whether he just flew into a 'manic rage' (as one eyewitness has described it), make no mistake, he will be taken to task both criminally and civilly.”