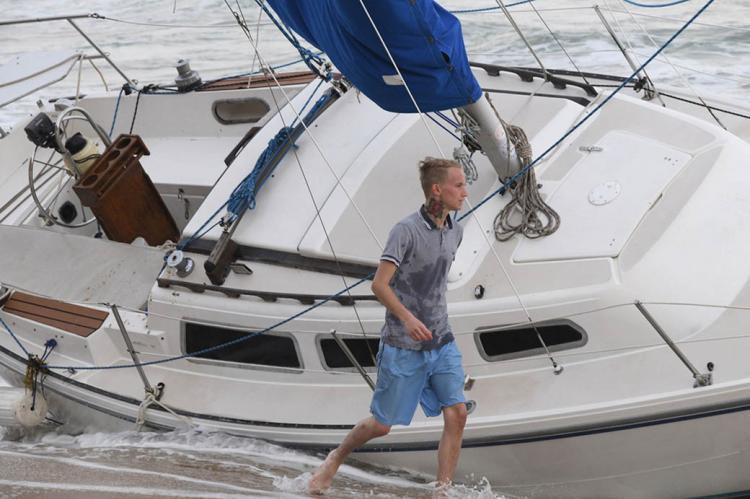 On Sept. 27, Matthew Hunt, a 21-year-old from Arizona, ran into trouble in his newly purchased sailboat, the Vanna White.
Doug Kuntz
By Christine Sampson

East Hampton Town Justice Steven Tekulsky has dismissed two misdemeanor charges against Matthew Hunt, a 21-year-old would-be sailor from Arizona who ran his used sailboat onto a Montauk beach in September just two days after buying it on eBay.

Convictions on two navigation-law charges, abandoning a vessel and reckless operation, would have enabled East Hampton Town to recoup thousands of dollars spent trying to help Mr. Hunt salvage the sailboat, the Vanna White. The boat sank on Sept. 26 as it was being  towed to Montauk Harbor.

According to court records, Justice Tekulsky dismissed the case on Dec. 5, though Town Supervisor Peter Van Scoyoc said this week that the town is pursuing restitution of about $10,000, accrued after tapping Sea-Tow for help with towing and salvaging.

A handwritten note in Mr. Hunt’s court file indicates that the town never filed a supporting deposition. His Legal Aid attorney, Matthew D’Amato, had requested one from the town harbormaster’s office on Oct. 2. However, Ed Michels, East Hampton’s chief harbormaster, said this week he had hand-delivered a deposition to the court himself and wasn’t quite sure what happened to it. “All the paperwork was done,” he said by phone on Tuesday. “It didn’t get filed in a fashion that satisfied the judge, and he’s the boss.”

On Sept. 24, Mr. Hunt purchased the Vanna White, a 27-foot Catalina manufactured in 1982, for $700 on eBay. He flew to New York two days later, took a train to Montauk, and picked up his boat there. He told The Star at the time that he intended to live aboard and start a new life. But a combination of low tides, changing winds, a failed engine, and strong ocean currents during his maiden voyage ended on rocks, and the boat became beached near Shadmoor State Park.

Several strangers on the beach came to help, both immediately afterward and in the days following. Mr. Hunt later hit it off with Edward McFarland, the owner of Ed’s Lobster Bar East in Sag Harbor, and worked there for a short time.     His current whereabouts are unknown; acquaintances said he left town not long after the incident. Before leaving, though, he appeared in Justice Court and pleaded not guilty to the two misdemeanors. That was on Oct. 2; he did not show up for his date in court on Oct. 23, and was not in the courtroom on Dec. 5. He did not respond to a phone call and a text message this week.

Mr. D’Amato referred a request for comment to a supervisor, Leo Cuomo, who also said he could not comment.

Mr. Michels said he was “not trying to destroy the kid, but I have to somehow figure out a way to recoup the taxpayers’ money. I know he didn’t do it on purpose, but what else can I do?”