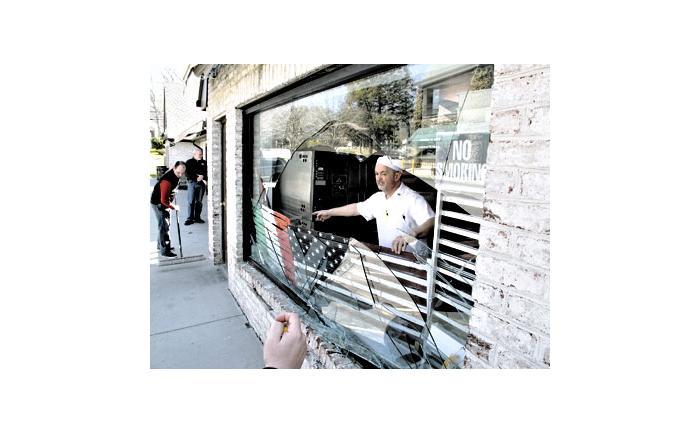 Two elderly drivers were involved in car crashes in the past eight days, both of which happened at the Red Horse Plaza in East Hampton Village. Just after 2 p.m. on Sunday, a car heading east veered across Montauk Highway, jumped a curb, and slammed into a tree and a telephone pole. The driver, Ross Velys of Water Mill, 85, had fallen asleep at the wheel, according to East Hampton Village police. Both he and his wife, Theodora Velys, 84, were taken to Southampton Hospital but did not appear seriously injured. The car, a 2013 Lincoln sedan, had severe front-end damage. “He was a little out of it. He didn’t know what happened,” said Rodney Roncaglio, an owner of Wines by Morrell, who was working at the complex when the accident occurred. Mr. Roncaglio said he was at his computer, with his back to the window. “I felt the accident — and then, boom,” he said. He ran outside, opened the driver’s door, and unbuckled Mr. Velys’s seat belt. The engine was smoking. The driver managed to get out on his own and made his way to a nearby bench. His wife, who was in the passenger seat, had her hand over her heart, Mr. Roncaglio said, when he opened her door. “She was thoroughly, thoroughly frightened.” The woman did not appear hurt, but the East Hampton Ambulance Association transported the couple to the hospital as a precaution. They were released after treatment. Mr. Roncaglio said the accident could have been worse. “Thank God there was that large tree there, otherwise he would have taken out a few cars in the parking lot,” he said. It was lucky too that the Lincoln did not hit any oncoming cars as it crossed the highway, he said. About half an hour after the crash, police called the East Hampton Fire Department to the scene, where a downed wire was impeding removal of the car. Fire officials called for the rescue truck, which carries a piece of equipment to detect live wires. An engine stood by. On April 9 at 1:55 p.m., Johanna Bakos, 82, of East Hampton drove her 2004 Audi into the Red Horse Market, shattering a large window and damaging the exterior brickwork. Her foot had slipped off the brake and onto the accelerator, she later told police, and the car jumped the curb. “I thought the oven exploded,” Ismael Hernandez said as he swept glass off the sidewalk in front of the building. Mr. Hernandez was standing near the display cases full of pizza, several feet from the window, talking to Gennaro Bruno Giugliano, the pizza maker, when the crash occurred. “Can you imagine if you were sitting over there?” Mr. Hernandez said to Mr. Giugliano, who was still visibly shaken 10 minutes after the crash. “Thank God he had me talking,” Mr. Giugliano said. He said the shards of glass would otherwise likely have fallen on him, because he often sits by the window as he waits for pizzas to cook or reheat. Mr. Giugliano said it was not the first time a car had hit the building. When Citarella’s Tutto Italiano was housed in that location, vehicles struck it several times, he said, right where the pizza ovens used to be. Village police have forwarded both drivers’ information to the Department of Motor Vehicles for a review, but Lt. Tony Long stressed Tuesday that it was not because of their age. “Driver reviews are based on the inability to perform basic driving tasks,” he said. “They say things come in threes,” said Mr. Roncaglio. “God knows what the third one will be.”