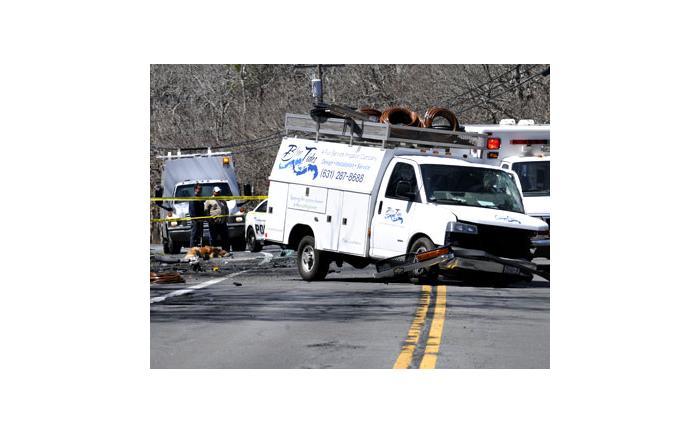 A Subaru collided with a work truck on Route 114 in East Hampton on April 16, sending two people to Stony Brook University Hospital.
By Taylor K. Vecsey

More than a week after a serious three-car accident on Route 114 in East Hampton, police are still looking for witnesses to help them figure out what happened. The drivers of a Subaru Forester and a Chevrolet utility truck that collided head-on just north of Stephen Hand’s Path on April 16 were both airlifted to Stony Brook University Hospital, but their injuries were not believed to be life threatening, according to East Hampton Town police. The driver of a Ford Explorer that was also involved in the accident was not injured and the car was not badly damaged. Police are withholding the drivers’ names because the investigation is ongoing, Capt. Chris Anderson said Tuesday. According to police, the Subaru was heading south and the Chevy, owned by the Blue Tides irrigation company, was heading north when they collided at about 11:45 a.m. A Sag Harbor Volunteer Ambulance Corps member responding to a separate incident on North Haven came upon the accident. Police said it seemed that the Subaru and Explorer may have bumped one another, sending the Subaru into the oncoming lane of traffic, but Captain Anderson declined to comment further this week. “The preliminary investigation indicates that the Chevrolet utility vehicle was uninvolved prior to the collision,” Captain Anderson said. The East Hampton Fire Department’s heavy rescue squad extricated the driver of the Subaru. Captain Anderson said he did not have information on either driver’s condition as of Tuesday. The owner of Blue Tides irrigation company did not return a call for comment. Police have asked anyone who may have witnessed the collision or anything leading up to it to call them at 537-7575. All calls will be kept confidential, they said.