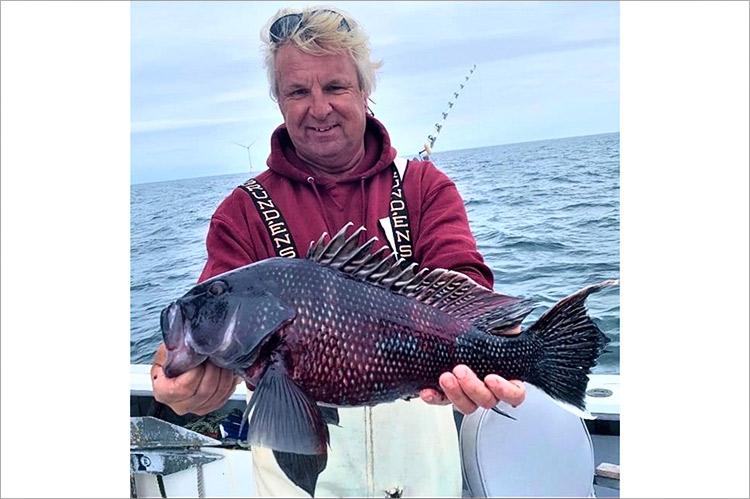 Eric Alexander Suddueth, a musician, animal lover, and waterman who lived and worked in Montauk for more than 30 years, died on Feb. 7 at the Kanas Center for Hospice Care in Quiogue. For two years he fought “a long and hard battle” with thyroid cancer, said his sister, Sandra Funk of Montauk. He was 60 years old.

As a teenager, Mr. Suddueth began working out of Captree Boat Basin as a mate on a party boat named for his maternal grandfather, the Captain Eric. Shortly after he graduated from Babylon High School, one September evening in 1979, he was working off Fire Island aboard the charter boat Yankee II. The boat hit a submerged object, broke up, and sank into the Atlantic Ocean within 15 minutes. Mr. Suddueth was able to help many of the 15 passengers and crewmen into lifeboats from the open water, where they waited for some 45 minutes before being airlifted by the Coast Guard. The experience had a profound effect on him.

By the late 1980s, he had moved to Montauk, where he worked on several charter boats, most recently including the Oh Brother, and for many years, the Herl’s Girl with Capt. Tom Herlihy.

“They had a great relationship, on that boat with Tommy, and Eric was the personality of it. He was the one who drew out the clients,” said Elizabeth Newman of Calverton, Mr. Suddueth’s partner of 13 years.

The couple met as regulars at a Planet Fitness in Riverhead, as Mr. Suddueth liked to venture UpIsland to run his errands. When subtle flirtation didn’t register, Ms. Newman finally resorted to challenging his form on the treadmill. Her first words to him were “you’re doing it wrong,” a story he would often recount in the years that followed.

Mr. Suddueth took her on a first date that involved lunch, dinner, and horseback riding at Deep Hollow Ranch in Montauk. “I knew at that moment when he kissed me, that this was something special,” she said. “We used to call each other soul mates.”

Mr. Suddueth maintained a seasonal room in Montauk and spent winters at their home in Calverton, where he used his downtime to research his family tree, discovering relatives who fought on both sides of the Civil War. On a trip to Virginia, the couple located an overgrown Suddueth family cemetery. As a horseman, he was excited to learn that another relative had fought in the cavalry in the Battle of Bull Run.

He helped to raise Ms. Newman’s three children, Holly, Rachel, and Tommy. Ms. Newman taught him how to care for her two horses and eventually he grew confident riding and got one of his own. He doted on the horses, dogs, rabbits, cats, and chickens, and was distraught in October by the death of a one-eyed cat named Uno, a constant companion.

A lifelong musician, Mr. Suddueth had recently bought an expensive guitar he had always dreamed of owning — and was teaching himself to play the piano by ear. He maintained, according to Ms. Newman, that “when you have the music gene you just know where to put your fingers and you don’t know why.”

He was born on March 1, 1961, in Copiague, grew up in Babylon Village, and was predeceased by his parents, Harry Alexander Suddueth and the former Patricia Hope Westerlind. His sister, Ms. Funk, suggested memorial donations to a cancer-related charity of one’s choosing. He will be cremated and interred alongside his parents at North Babylon Cemetery on Livingston Avenue in Babylon, after a memorial service in the spring.