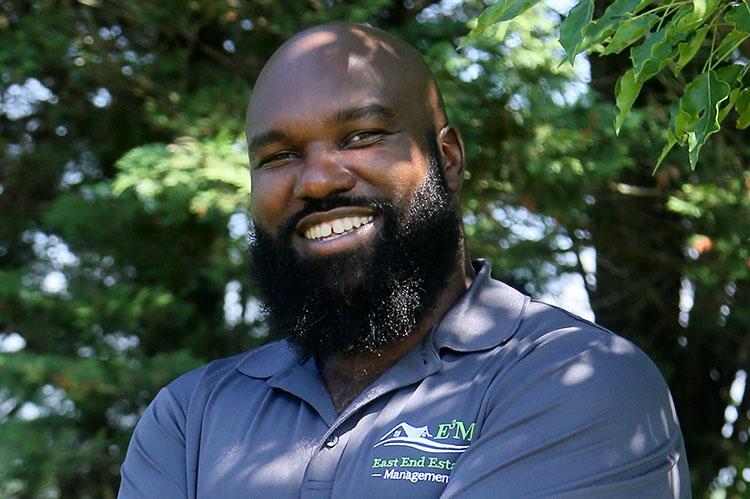 Paul Jones was a big-hearted, free-spirited man with a zest for life and many talents. A longtime fixture at the door of the Stephen Talkhouse, a real estate agent and entrepreneur, a violin player who also D.J.'ed, and a loving fiancé  and father, Mr. Jones died of Covid-related pneumonia at Stony Brook University Hospital on Feb. 26. He was 40 years old.

He loved hunting, fishing, and exploring the outdoors; in his youth he was known to collect Native American arrowheads. He was a member of the Montauk Rugby Club. His mother, the Rev. Dr. Connie R. Jones, who is the associate pastor at East Hampton's Calvary Baptist Church, said he was kind to all people, never held a grudge, and did not let obstacles get him down. He was always there for her, she said. "He never came to East Hampton without coming by his mom's house to see if anything needed to be done."

Friend after friend this week echoed her thoughts: Mr. Jones was a big, sweet, teddy bear of a man.

"He was always positive, always cracking a joke, and always picking our spirits up," said Peter Honerkamp, a managing owner of the Talkhouse, where Mr. Jones had been a bouncer for 10 years.

Born at Southampton Hospital on June 30, 1980, Paul Craig Jones III was raised in East Hampton by his parents, Sgt. Paul C. Jones and the Reverend Jones. He graduated from East Hampton High School in 1998 and attended Campbell University in North Carolina to become a personal trainer. He missed home, though, and returned to East Hampton, where his passion for the violin earned him a music scholarship to Five Towns College in Dix Hills.

His mother said it took him some time to find his way professionally. At the time of his death, Mr. Jones was a real estate agent with Corcoran, and had a cleaning business and estate management service as well, with sidelines as a jewelry designer and a certified welder.

In October 2020, while living in Water Mill, he contracted Covid-19, and spent five days in hospital with severe symptoms. The family said he never really recovered.

"It was definitely very hard on him," said Alexandra (Sasha) Saland, Mr. Jones's fiancÄe and partner of more than four years. "He felt really disconnected . . . and continued to feel unwell."

Mr. Jones was not alone. Medical professionals and epidemiologists are studying the phenomenon of "long Covid," with studies showing that as many as 25 percent of patients continue to experience symptoms for months after being released from the hospital.

On Feb. 8, Ms. Saland persuaded Mr. Jones, who was experiencing extreme fatigue and shortness of breath, to return to the emergency room in Southampton. From there, he was transferred in critical condition to Stony Brook and rushed into heart surgery. His Covid-damaged heart stopped during the operation, and he was placed on life support.

Friends, relatives, acquaintances, and total strangers rushed to support a GoFundMe campaign to pay medical bills and support his family, raising more than $110,000 in a matter of days. Among the donations was $4,500 from the proceeds of the Friday Night Hustle performance series at the Talkhouse, an effort coordinated by the musician Nancy Atlas.

"He was the perfect combo of teddy bear and scary bouncer when he needed to be," Ms. Atlas said in a letter to fellow musicians this week. "Lord knows he kept us covered from rogue, long-nailed, drunk harpies and wanton men."

On Sunday, Ms. Saland spoke of losing her fiancÄ. "What is a life well lived? I think it's the life you enjoy and treasure every single day, as tomorrow is not guaranteed for any one of us," she wrote on the GoFundMe page. "What I can say for sure -- Paul had a life worth living. He's been taking chances, he's been trying different things, as he was a man of many talents and all of those talents were worth exploring. He's been down on his knees and he rode his highs, as all men have different stages in one's life."

The couple met seven years ago when she was photographing a real estate listing for him. A few years later, coincidentally, they matched up on an online dating website. Their wedding, postponed when they learned they were expecting a baby and postponed again because of the pandemic, was to have finally taken place later this year. Mr. Jones was a devoted father to Paul C. Jones IV, 13, who is called Jonesie, and to Asher Jones, 20 months, and a loving stepfather to Ms. Saland's daughter, Tatyana, who is 8.

"In the last four or five years, I saw his life changing," his mother said. "I would always be praying for him. I saw that change in him -- I saw him walking more into manhood. I saw the character of a father, and also a wonderful family man."

Mr. Jones's father died some time ago. In addition to his mother, fiancÄe, and children, he leaves a sister, Kim Jones of East Hampton, and two brothers, Paul Anthony Jones of New Jersey and Joseph Smith of Georgia. He is also survived by an uncle, Larry Smith of Springs; three aunts, Brenda Tylor, Jacquelin Butts, and Ethal Ferguson, all of whom live in Virginia, and many nieces, nephews, and cousins. He also leaves his former partner, Juliette Logie, Jonesie's mother.

The family will receive visitors on March 13, a Saturday, from 11 a.m. to 12:30 p.m., at Calvary Baptist Church, 60 Spinner Lane in East Hampton. The Rev. Walter Silva Thompson of Calvary Baptist will officiate, and Ronald Wilson, elder and pastor of King's Chapel Church of God in Christ in Southampton, will offer a eulogy. A full celebration of Mr. Jones's life will be held on his birthday later this year, with details to be announced.

Cards of sympathy can be sent to P.O. Box 173, East Hampton 11937. Memorial donations have been suggested for his children via GoFundMe, online at gofund.me/e525ce6d.

The Outdoor Agenda 09.17.21
A Surf Meetup for Youth
I-Tri Ride and Wine Is Saturday
END_OF_DOCUMENT_TOKEN_TO_BE_REPLACED