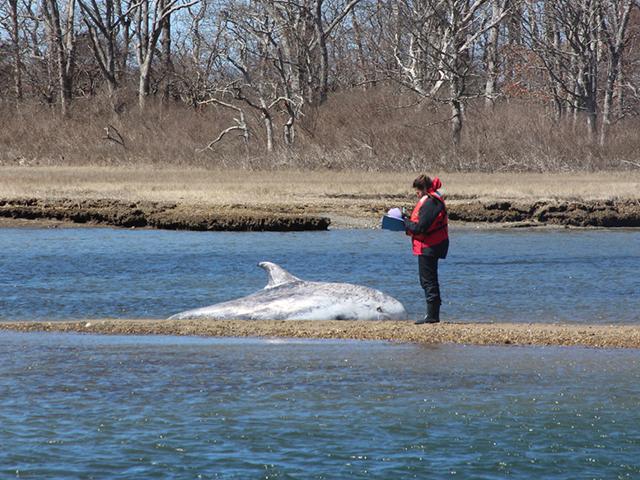 A Risso’s dolphin, one of a larger dolphin species with a distinctive gray body, was found stranded on a sandbar between the end of Louse Point in Springs and Wood Tick Island this week. Maxine Montello, the rescue program coordinator at the Riverhead Foundation for Marine Research and Preservation, said the foundation received a report of a dolphin about 30 to 40 feet offshore on Sunday evening. Unsure if it was stranded, and with the sun setting, the team decided to wait until the morning.By Monday morning, it was clear the dolphin could not get off the sandbar. Riverhead Foundation staff visited the site with representatives of East Hampton Town Marine Patrol and the State Department of Environmental Conservation, taking a boat to get to the dolphin. An assessment revealed that it was a male in good condition, with no external signs of injuries. It was 101/2 feet long. A dolphin of that size could weigh as much as 800 pounds, Ms. Montello said, though they were not able to weigh it.A stretcher was used to lift the dolphin off the sandbar. “The minute the animal had the pressure relieved from its underside . . . it swam right off,” Ms. Montello said. “Our team is very sore,” she said, referring to the dolphin’s size.  Risso’s dolphins are not as common as bottlenose dolphins in this area, but they have been found in waters around Long Island. The foundation has rehabbed two such dolphins in the past. This was the first live stranding the foundation has responded to since 2015.