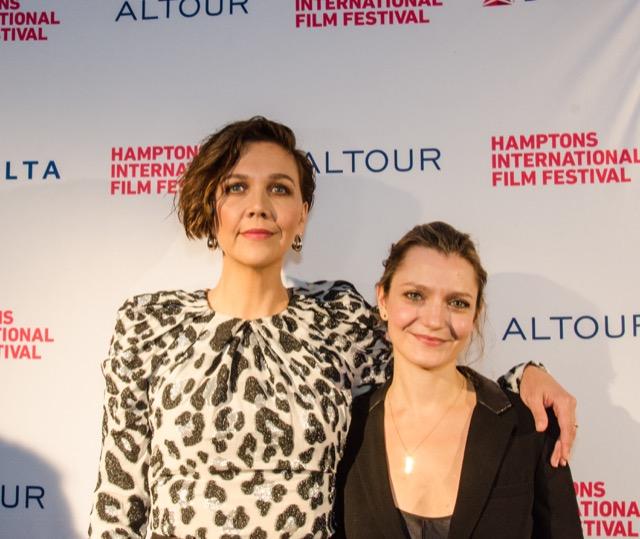 Sara Colangelo, right with Maggie Gyllenhaal, who had a script that was reviewed and sharpened during a previous Screenwriters Lab, is a mentor this year.
By Jennifer Landes

On Monday, HamptonsFilm announced the participants in its annual Screenwriters Lab, which has been held every spring for the past two decades. It will continue this year, taking place virtually the weekend of April 9 to 11.

The lab has been instrumental in shepherding the development of more than 50 screenplays, many of which have gone on to be produced and become award-winning films.

This year's mentors are Jesse Andrews, Sara Colangelo, and James Ponsoldt. Both Ms. Colangelo, who wrote "Little Accidents," "Worth," and "The Kindergarten Teacher," and Mr. Ponsoldt, the screenwriter of "The End of the Tour," "The Spectacular Now," and "Smashed," are alumni of the lab. Mr. Andrews is a screenwriter and novelist of work that includes "Me, Earl, and the Dying Girl" and the upcoming Pixar film "Luca."

The three selected screenplays, which the mentors and participants will work on over the weekend, are “Back Seat” by Lana Wilson, “Bear Lake” by Zoë Maltby, and “Samir, the Accidental Spy” by Charlotte Rabate. Anne Chaisson, the executive director of HamptonsFilm, noted that all three of the selected screenwriters are women, the second time that has happened in three years.