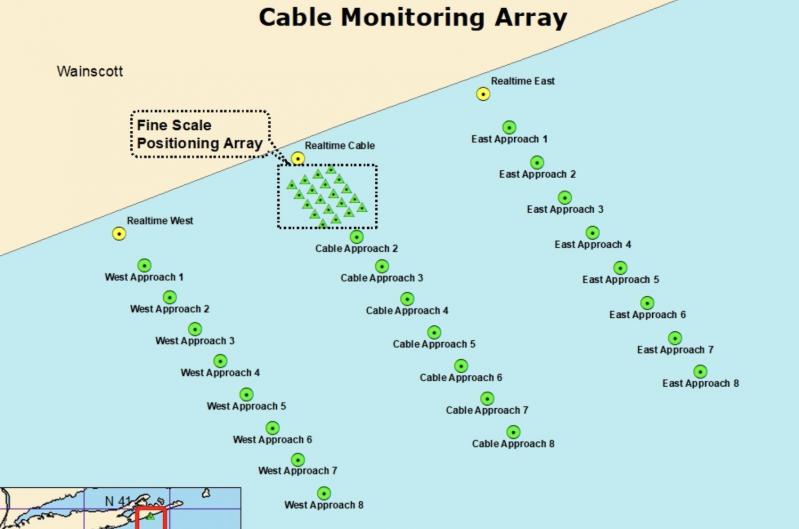 The placement on the ocean floor of 500-pound concrete moorings for a fisheries study off Wainscott, where the South Fork Wind farm's transmission cable will make landfall, has added to commercial fishermen's frustration with the project.
By Christopher Walsh

Fishermen on the South Fork are angered by the placement in August of several dozen 500-pound concrete blocks on the ocean floor off Wainscott, moorings for the telemetry devices in use for the South Fork Wind Fisheries Study Work Plan that was a condition for the East Hampton Town Trustees’ lease agreement allowing the South Fork Wind farm’s transmission cable to make landfall on a beach under their jurisdiction.

Researchers with Stony Brook University who are conducting the five-year study required of the wind farm’s developers are at present on a regular visit to the sensor array to collect data, replace batteries, and deploy new, smaller, and retrievable moorings alongside the existing 500-pound blocks. A spokeswoman for the developers, Orsted U.S. Offshore Wind and Eversource Energy, said on Tuesday that the original moorings will be removed.

As a term of the lease agreement allowing the developers to land the wind farm’s transmission cable at the ocean beach at the end of Beach Lane in Wainscott, the developers are required to fund a study of fisheries before, during, and after construction to evaluate its possible nearshore effects on migratory and other fish behavior. The telemetry array covers the cable route in New York State waters, extending to seven miles offshore.

“This is not new,” John Aldred of the trustees said. “This is the telemetry study where acoustic sensors are placed in the ocean, fish are tagged, and the sensors pick up the tagged fish. By analyzing movements before, during, and after construction, there can be an assessment of any impacts that the cable may have on the fishery.”

The cement blocks deployed in August are consistent with moorings that have been used previously by the Stony Brook University team to deploy acoustic sensors in the waters off Long Island and New Jersey, the developers’ spokeswoman said.

There are acoustic sensors “in a lot of places out there in the ocean south and east of Long Island,” Mr. Aldred agreed. “There have been for a long time. . . . But I think these are more closely spaced because there are a lot more sensors in a small area. This is probably a bit more of a difficult area to traverse for the boats.”

Bonnie Brady, executive director of the Long Island Commercial Fishing Association, criticized the deployment of the concrete blocks on the sea floor where dozens of boats fish. She described the area as “a really busy squid, fluke, all-of-it area,” she said on Monday. “Why would academia treat fishermen so poorly when they’ve got a body of knowledge academics can’t begin to?” For trawl fishermen, the concrete blocks are a hazard, Ms. Brady said.

Ed Warner of the Southampton Town Trustees agreed. Dan Warner, his son, is a commercial fisherman who “was the lucky one who caught the trophy” when he caught one of the moorings on his trawl net last year. The blocks are in “prime summer squid grounds for 40 to 50 fishermen,” he said. He complained that fishermen were not consulted as to the equipment’s placement. “Basically, you’re going to take some cement and monitoring devices and just dump it in the ocean.”

The younger Mr. Warner confirmed that one of his nets was ruined when it caught on one of the concrete blocks soon after it was installed. The developers compensated him for the damaged equipment, he said. But while the moorings were marked on nautical maps made available through Orsted’s notice-to-mariner briefings, “this is the ocean,” he said. “People move them a bit, sand moves, nothing stays in one spot out there.” The mooring his net was caught on “should have been nowhere near where it was.” Other fishermen have had the same experience, he said.

Ms. Brady said that her husband, a commercial fisherman based in Montauk, also caught a net on one of the concrete moorings. “Apparently, he was towing, and not only did it cut through his half-inch stainless steel wire, it also popped his tow wire,” she said. “Somebody could have been killed.”

The new moorings weigh 150 pounds. They are “more compatible with commercial fishing in response to the feedback we’ve received from the community on original deployment of cement moorings,” the developers’ spokeswoman said.

In other wind farm news, onshore construction on town roads has been completed, Councilwoman Cate Rogers said on Tuesday, fulfilling a mandate that the work be completed by Saturday. The work involved trenching and installation of conduit on the path from the transition joint bay installed under the Beach Lane road end to the Long Island Power Authority substation in East Hampton.

This week saw the start of similar conduit work along the Long Island Rail Road right of way between Buckskill Road and Stephen Hand’s Path.