A mulberry tree gave its life in an injudicious cleanup 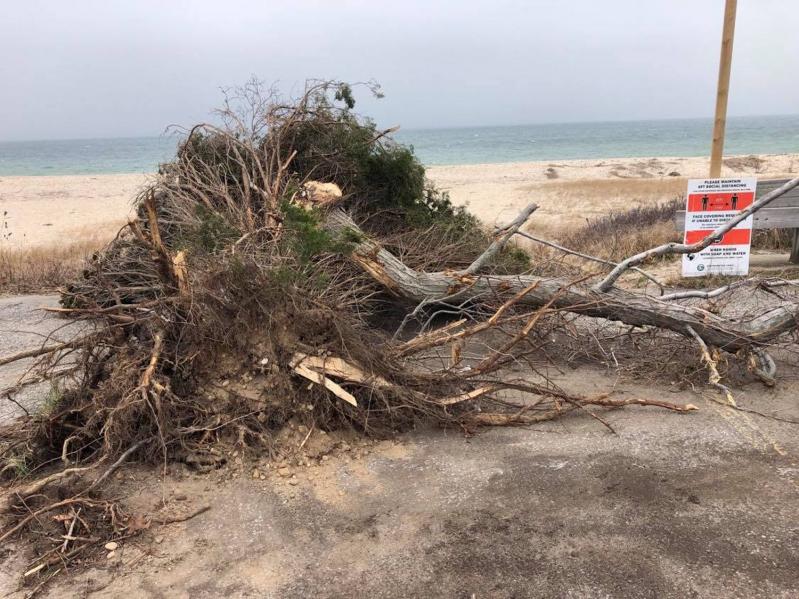 At Long Beach last April. Now, a year later, the Southampton Town is using its controversial cleanup as an opportunity to teach the public about the importance of native plantings.
Jill Musnicki
By Christopher Gangemi

There is some history to this project, and irony abounds.

The first blow was struck long ago by Man, when a parking lot was laid a few hundred feet parallel to the shoreline, downwind of the prevailing wintertime northwesterlies — meaning it would always compete with blowing sand. Over the course of many years, Nature, in the form of that sand, reclaimed some of the lot. Unfortunately, that conflicted with Man’s sacred right to park automobiles in orderly painted rows, and last year, Man struck back at Nature: Town maintenance crews descended, with instructions to “clean up” the parking area to make it “safer.”

“We told them to go in and clean the lot, and that’s what they did,” Kristen Doulos, Southampton Town parks director, said at the time.

In so doing, the crews removed many native plants, including beach plum and red cedar. They also removed a much-loved mulberry tree, nonnative, according to Stephen Schott, a habitat restoration specialist with Cornell Cooperative. A photo of the mulberry, slain, lying on the asphalt, helped generate over 400 signatures on a petition started by Jill Musnicki and Helen Roussel.

“We need native plants and trees that provide food and habitat for birds and marine wildlife,” Ms. Roussel said this week. “Insect numbers are plummeting due to the use of pesticides . . . leaving many birds to starve.”

“I did hear about the mulberry tree, that was the real lightning rod,” said Mr. Schott. Due to years of spotty maintenance, the mulberry took root in sand deposits left in the parking area. “That mulberry tree was over the top of asphalt. I’m kind of shocked that a tree that size was able to have enough anchorage to stand upright, especially with the winds. Also, mulberries are not really known to be salt-tolerant, and just the salt spray alone should have really done it in.” Its survival was unusual, he said.

Now, a year later, the town is using its controversial cleanup as an opportunity to teach the public about the importance of native plantings.

“After seeing the ‘cleanup’ and hearing the outcry from residents,” said Diane Hewett, vice president of the Noyac Civic Council, “we held a meeting in April 2021 to discuss the matter with Ms. Doulos.”

The cleanup “helped spark the conversation, and had us look at that location,” Ms. Doulos said. “We started to think, ‘What else can we do about restoration here, and coastal resiliency?’ And we wanted to show that we’re a willing partner in that effort.” The parks department not only addressed the particular situation, she said, but also wanted to consider the future.

Cornell Cooperative’s marine program received Town of Southampton community preservation fund support in 2021. With that money, they expanded the coastal plant nursery at the Tiana Bayside facility in Hampton Bays, thus providing a ready supply of plants for town shoreline restoration projects. Beach grass, high-marsh grass, and other coastal plant and shrub species grown by the extension at Tiana Bayside will all be utilized at Long Beach. In addition, there will be some on-site transplantation of seaside goldenrod.

“I love doing these types of projects,” Mr. Schott said. “We’re doing this gratis, to help out.”

Pointedly, they will not be replanting any mulberry trees. “I’m a marine botanist and have done work dealing with invasive species,” Mr. Schott said. “Honestly, I have no empathy for them. A nonnative species doesn’t belong here.”

The plantings will be limited in scope to begin. Mr. Schott estimates they’ll place about “twelve hundred square feet of plantings around the monument area.” Most of them are “anchor plantings” to help with beach erosion, but the seaside goldenrod will be great for the monarch butterflies during their southward migration in the fall, he noted. The plantings will be surrounded by a four-foot beach fence, and Mr. Schott is hopeful they won’t get trampled by humans or unleashed dogs, which are problematic at Long Beach.

Ms. Doulos said if people see unleashed dogs on the beach, they can call the non-emergency police number, 631-728-5000. “Enforcement is really the best tool,” she said, “if people are written tickets. Dogs are not allowed on our bathing beaches at all between April 1 and October 31.”

“If this is successful and well received by the community,” said Mr. Schott, the cooperative extension hopes to do more, possibly a larger follow-up planting in the fall. “We’re looking for survival into the summer first,” he said.

Perhaps the removal of the nonnative ailanthus trees will be next. “That’s not been the focus so far,” said Mr. Schott, “but they can be removed without adversely affecting the area."

Mr. Schott was correct: That was no ordinary mulberry tree. It served as a sacrifice so that many hundreds of native plants could take its place and take root. Will Man and Nature finally work together to improve the habitat at Long Beach? Time will tell.

Mashashimuet Park's History and Future
A Conference for Young People to Create Solutions
Get Outside, Get Moving
END_OF_DOCUMENT_TOKEN_TO_BE_REPLACED