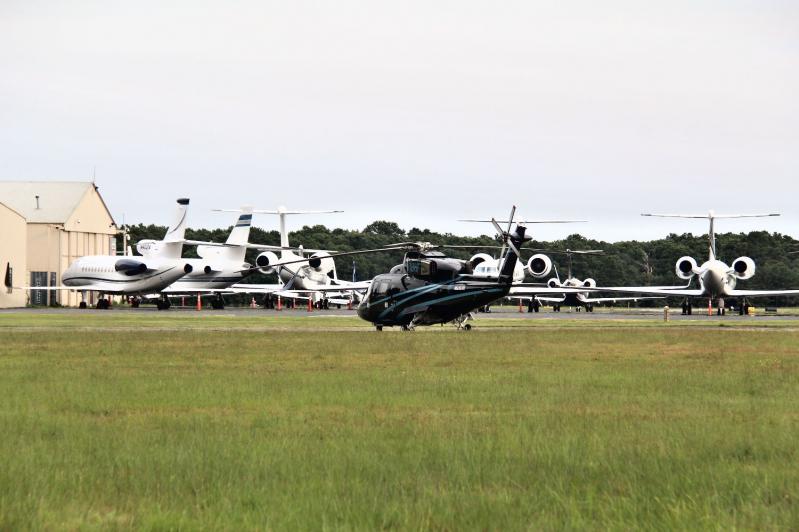 With the expiration of Federal Aviation Administration grant assurances, East Hampton Town regains control of East Hampton Airport in Wainscott, and with it the ability to enact restrictions or even close and repurpose the site.

Supervisor Peter Van Scoyoc said at the town board's meeting on Tuesday that the board's next work session, on Oct. 12, will include a presentation on the four workshops on re-envisioning the airport that were held last month. The workshops were meant to advance a shared understanding of facts, identify key issues of concern, and allow stakeholders to be heard before the board makes any decisions as to the airport's future.

Residents of East Hampton, across the East End, and from as far away as Queens have long pleaded with the board to close or at least enact curfews and other restrictions on flights, citing the incessant noise of jet and helicopter traffic, particularly in the summer.

The board's Oct. 19 work session will include a discussion with the town's outside counsel on airport matters "about a number of possible avenues the town could take to restrict operations, hours of operations, and further control air traffic," Mr. Van Scoyoc said, referring to "a whole array of options we can review" and the potential consequences of taking specific actions.

The review will include a look at potential impacts on the Montauk Airport, a small, privately-owned facility. Many Montauk residents have expressed the fear that closing or enacting restrictions at East Hampton Airport would divert air traffic, and attendant vehicle traffic, to that hamlet. "I do not support any changes to East Hampton Airport that would result in increased traffic and disruption at the Montauk Airport," Mr. Van Scoyoc said. "We have a lot more work to do in understanding our different possibilities."

Councilwoman Sylvia Overby, the board's liaison to the Wainscott Citizens Advisory Committee, told her colleagues that some members of the committee complained that the East Hampton Community Alliance, which advocates for keeping East Hampton Airport open, were making misleading statements about the consequences of closing it. Advocates for maintaining airport operations have claimed that closing the airport would eliminate a critical medevac site.

Two members of the committee, Ms. Overby said, spoke with a Stony Brook Medicine flight paramedic at the East Hampton Aviation Association's Just Plane Fun Day, held on Sept. 11 at the airport. Reading from an email sent by the committee, she said that the flight paramedic "clearly stated that they don't really use KHTO," the airport's aviation designation, for medevac operations. Rather, they fly directly from a base in Westhampton or Islip to "a spot near the emergency itself . . . and then return to Stony Brook, generally. As she put it to us, 'we meet the injured person pretty much anywhere they are.' "

"I think that's a misconception many people have about the airport," Mr. Van Scoyoc said, "that it's used quite a bit for medevac." The town has several designated medevac landing sites, he said.

Members of the Wainscott Citizen Advisory Committee's airport subcommittee have requested that the town commission an analysis of emergency operations at East Hampton Airport.