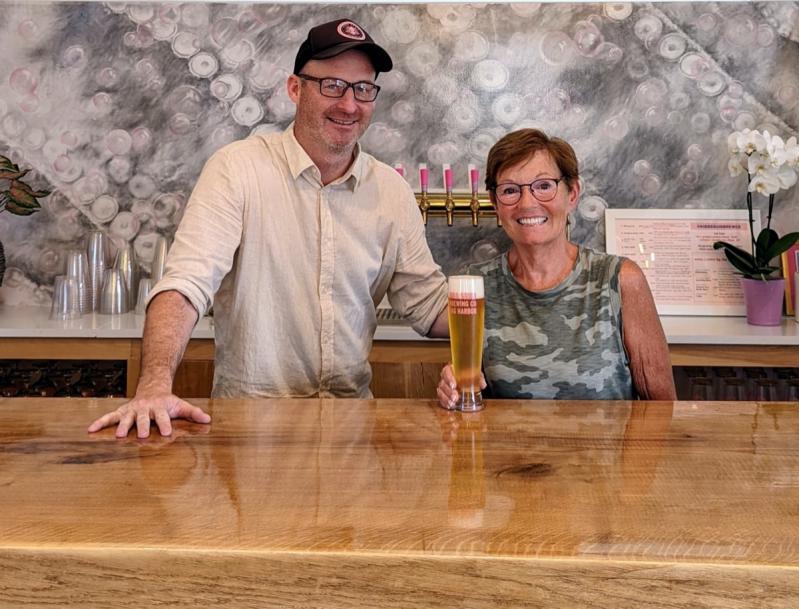 Rory McEvoy with MaryLou Kidd, who is a direct descendant of Captain Kidd and whose name is referenced in Kidd Squid, the name of a new brew pub in Sag Harbor.
Harlan Erskine
By Christopher Gangemi

The Kidd Squid Brewing Company, newest occupant of the 1870 Sag Harbor railroad freight depot station, opened its doors on July 18, after a yearlong wait on the State Liquor Authority.

Rory McEvoy and Grainne Coen took over the lease to the Spring Street building in February and "every week we waited for the license we just did something else to make it better."

Kidd Squid's main ware is beer, brewed and canned at the North Fork Brewery in Riverhead. Brews on tap include a gose ale, a lager, a pilsner, and New England Style IPAs, each named for a different full moon.

A woman stepping out of the tasting room onto the gravel outside of the old train station, where several tables are crowded by plants from the adjacent garden center, exclaimed, "I feel like I'm in the Garden of Eden!" Perhaps her experience was sharpened by the Strawberry Moon IPA she had just quaffed. "There are all these flavors!" she said, blinking in the sun.

There's a lot to the name, a mash-up of familial and historical influences. Ms. Coen's and Mr. McEvoy's son, Bennett, came up with the squid part. Meanwhile, Mr. McEvoy remembered a last drink with Ms. Coen's father, who died in 2020, at the historic Captain Kidd pub, on the Thames in London. "He was as English as you can get," said Ms. Coen. In addition, Captain Kidd was rumored to have buried a mass of treasure on Gardiners Island, tying the name to local folklore.

For those used to paying for plants in the once-crowded and dark garden center, the experience of stepping into the tasting room is a little jarring. It's full of light, open, and improbably for a brewery, quite pink. "Pink is the anti-brewery color," said Mr. McEvoy who started home brewing in 2015.

The wallpaper, designed by Mr. McEvoy, matches the art on the beer cans. "I've just always done it," he said of the digital art, a skill learned from his past life as an event producer. The labels are whimsical and unlike any other beer label you are likely to find. After the quality of the beer, he said it's the can art that attracts the modern beer drinking audience.

Still, despite all the pink and whimsy, he said "People come in asking for propane all the time."

"There's nothing like a fresh local beer that's drank as close to the source as possible," he said.

How fresh? "Two moons at a time would be good," said Mr. McEvoy, meaning its draught beer is two months young.

Because Kidd Squid primarily uses ingredients sourced from New York State, it has a "farm brewery license" that permits it to sell other New York State-labeled wine and spirits. So, in addition to its beer, it offers Wolffer cider and wine, Channing Daughters chardonnay, and Sagaponack Farm Distillery vodka, gin, and rye by the bottle. Rounding out the drink menu is Kidd Squid's own hard seltzer called Up She Rises, and, as a non-alcoholic option, a rotating flavor of Mombucha Kombucha, from Brooklyn, which can be bought on tap or in bottles.

The store is open primarily afternoons, year-round, Tuesday through Sunday. There is indoor and outdoor seating, or you can just pick up a $20 four pack to go. Kidd Squid will start distributing its beer more widely this winter, just about the time it releases its Christmas beer.