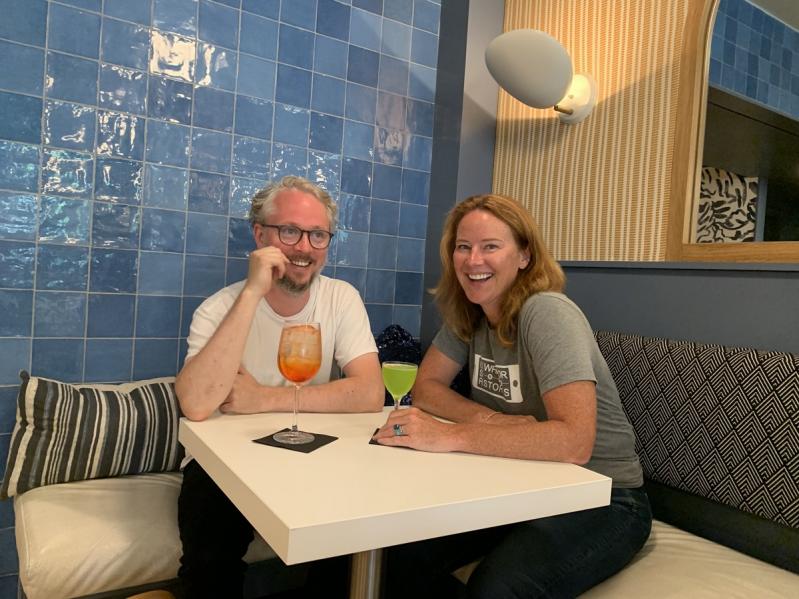 At Rosie's restaurant in Amagansett, the management and kitchen don't just talk the talk of "farm to table," the now overused expression everywhere, they source all of their produce from nearby farms, favorites being Quail Hill, Sagaponack, Amber Waves, and Balsam. They prefer to call their food "creative American fare." And it is, indeed.

Christina Isaly, who is the owner of Rosie's, may not have a familiar name around these parts, but in the Midwest the name Isaly is iconic. In the early 1900s the Isaly family started a chain of dairies and restaurants in Ohio and Pennsylvania, and expanded throughout the Midwest. They were famous for their "chipped chopped ham," ice creams, and most of all, the Klondike bar. The Klondike bar began as a slice of vanilla ice cream coated in a crisp Swiss chocolate shell and wrapped in foil. It was considered an "adult" dessert because it didn't have a stick in it like popsicles and other childhood delights.

Michael Hamilton, the executive chef, who hails from the southwest of England, began working in restaurant kitchens at the age of 15. He started as a consulting chef at Rosie's but is now on site full time.

After coming to America in 2004, Mr. Hamilton opened several restaurants in New York City and worked with Mads Refslund at Acme. Mr. Refslund, better known as the other half of NOMA with Rene Redzepi, is also a (consulting) chef out here for Shou Sugi Ban House, the Japanese-inspired spa and inn in Water Mill. Mr. Hamilton also spent a season cooking at Montauk's Surf Lodge, when he first began his relationships with local farmers, foragers, and fishermen.

Ms. Isaly was born and raised in New York City but the family would return to southwestern Pennsylvania for summer vacations. When she first came to the East End, she wondered, why don't we come here for vacation, here where there are beautiful beaches and breezes? She also wondered, upon arriving in Amagansett, "why isn't there an ice cream store here?"

When the location in Amagansett that previously housed the Squeezery and Jamagansett (those names alone should be enough to close them down) became available, she jumped at the chance to open her own ice cream store. But since the spot was fully equipped to be a restaurant, she pivoted, and opened Rosie's, named for her late mother, in 2019.

When the Covid-19 pandemic hit, Rosie's managed to stay open, offering takeout and meal boxes with an uncooked protein and prepared side dishes. They had already established a breakfast, "Blunch," and bar scene, so the reopening in May 2021 wasn't too traumatic.

Ms. Isaly and Mr. Hamilton have worked with a number of young chefs at Rosie's, several of them from Blue Hill at Stone Barns in Pocantico Hills, N.Y. Mr. Hamilton himself has worked with Gordon Ramsay, Daniel Boulud, Rick Stein, and Nathan Outlaw, whose restaurant the Black Pig in London earned a Michelin star within its first seven months.

Over the last three years of working together, the owner and chef have become great pals and collaborators. They make a point of having fun staff appreciation days and hanging out with fellow restaurant colleagues from Il Buco and Moby's.

In between commuting from the city, Ms. Isaly is raising five children and is on the board of Guild Hall. Her work life outside of the restaurant business has been one of contrasts, from real estate development, fashion (working with Ralph Lauren and Nancy Geist), and Broadway production ("Jagged Little Pill").

Mr. Hamilton's "spare time" (no such thing for a chef in summer), is taken up with playing around with the Rosie's sound system, sharing playlists with the restaurant's guests, and working to find some interesting art for the restaurant's walls. At home, his wife, Stephanie Kessell, is finishing her last year of a doctorate in Chinese medicine.

It is fun every now and then to revisit a restaurant you reviewed upon its opening, especially if it's one you described as "a precocious joy." I had been back to Rosie's in Amagansett numerous times for delicious lunches, but not for dinner.

On a recent visit there were beautiful Moriches Bay oysters with a rice vinegar mignonette, beets with shaved macadamia nuts and blue cheese, risotto full of fava beans, peas, and mint, a fresh green pea soup with chamomile and Aleppo pepper, a vegetable crudo with miso-tamari aioli, a warm tuna and butter bean salad, and a brilliant hibachi chicken basted with Marmite and ponzu. A scallop crudo with fresh wasabi and Osetra caviar is another popular signature dish.

And yes, there are even ice creams and sorbets, all superb. According to Ms. Isaly, all of the chefs who have worked at Rosie's have been inspired to give her ideas for ice cream flavors.

"When it comes to our food we like to highlight the natural beauty of what it is, like this place where we are," she said about the menu philosophy. About the chef, she said the aim of the restaurant is to give him a forum "to perpetuate what he thinks is important and good."

Mr. Hamilton said his goal was to "build a menu that actually encompasses what is being harvested and applying as minimal technique as possible and letting the bounty shine."

It is heartening to see that this "precocious joy" is not just surviving but thriving, and that Rosie's is miraculously managing to stay open seven days a week for breakfast, "blunch," and dinner.

Now if only they'd only share the recipe for that hauntingly delicious hibachi chicken with the Marmite glaze and put a Klondike bar on the dessert menu!

Mashashimuet Park's History and Future
A Conference for Young People to Create Solutions
Get Outside, Get Moving
END_OF_DOCUMENT_TOKEN_TO_BE_REPLACED