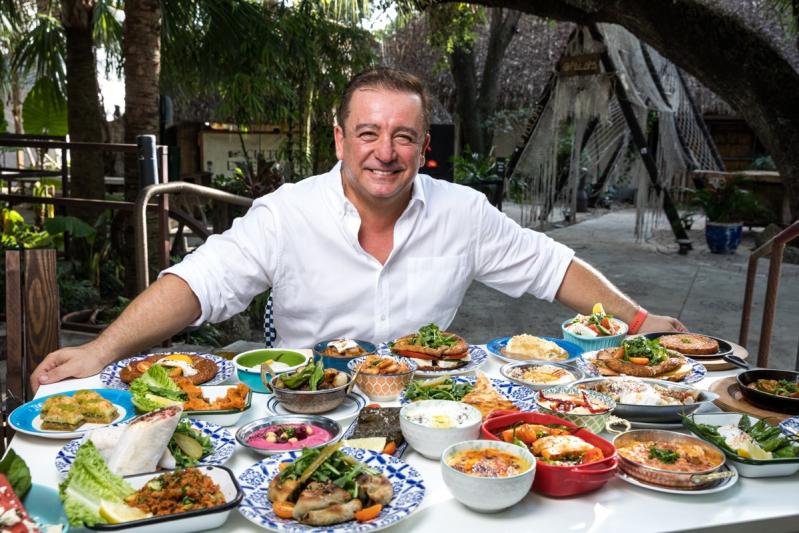 An array of Turkish cuisine with El Turco's Gokhan Yuzbasioglu at the center of it.
El Turco
By Jennifer Landes

Turkey Via Miami
El Turco, a well-received Miami cafe, opened in East Hampton last weekend. According to the Michelin Guide, the restaurant's Miami menu is "an enticing offering of breakfast fare, featuring organic eggs that support Turkish mezzes, manti and savory pastries like borek. Baked in-house, this burnished coil is stuffed with spinach, sprinkled with sesame seeds and garnished with cherry tomatoes. The izmir kofte arrives in a mini ceramic dish filled with beef meatballs baked in tomato sauce alongside batons of roasted potato. A single charred jalapeno adds the perfect bit of heat to each mouthful."

The East Hampton branch has opened at 44 Three Mile Harbor Road, a spot typically known for restaurants that turn into nightclubs once dinner service is over. The owner of the site, Frank Cilione, has worked with the founders of the restaurant, Nurdan Gur Yuzbasioglu and Gokhan Yuzbasioglu along with the developer Cagri Kanver to renovate the property for the new venture.

According to a press release, El Turco's menu features dishes "with high-quality meats, fine imported spices, and local seasonal ingredients," with each item based on classic Turkish recipes made modern. Many dishes originate from the Aegean and Anatolian part of Turkey, as well as special selections from the Mediterranean and southeastern region.

The owners said live entertainment and music will be part of the experience, contributing in the later evening to a "high energy" atmosphere. With dinner service beginning at 6 p.m., earlier guests will be offered more family-style meals. The restaurant is open Tuesdays through Saturdays for dinner and for brunch on Sunday from 10 a.m. to 4 p.m. The phone number is 631-502-9597.

Table for Dinner
The Watermill Center will take its popular Artists Table brunch series of talks and translate it into a dinner presentation on Friday beginning at 6:30 p.m.

Taking the mic will be Robert Nava, a current artist in residence and this year's Inga Maren Otto fellow at the center. He received his M.F.A. in painting from Yale University and is known for his "whimsical creatures, rendered through gestural markings" inspired by medieval Christian imagery, Mayan and Sumerian art, and contemporary animation.

The chef for the evening, Cali Faulkner, has served in the kitchens of Eleven Madison Park and the Modern in New York City. She lived in Provence and Paris in France for a few years and returned to the states to work at Crown Shy and Oxalis. Since last year, she has been in Amagansett, starting an independent culinary venture called Third Falcon.

General admission to the dinner is $250. Attendees must be fully vaccinated with proof of vaccination required during check-in. Masks are required indoors.

Mashashimuet Park's History and Future
A Conference for Young People to Create Solutions
Get Outside, Get Moving
END_OF_DOCUMENT_TOKEN_TO_BE_REPLACED