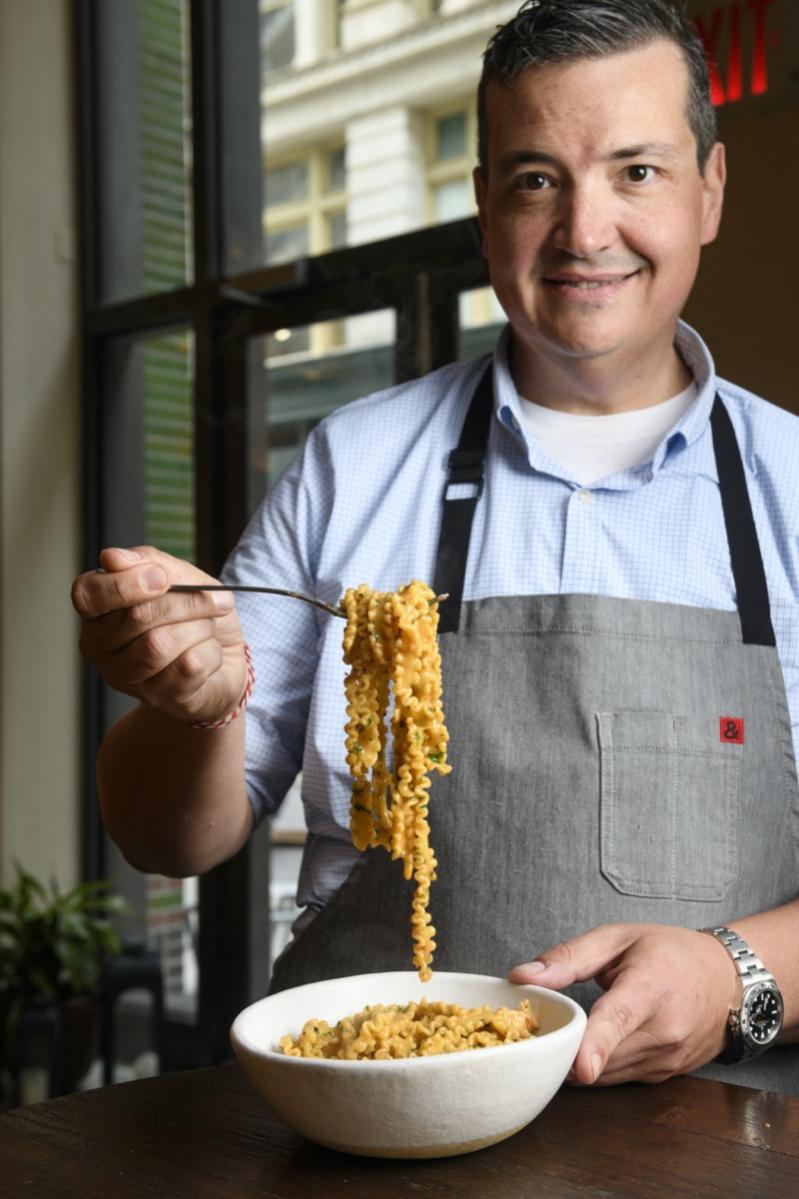 Expect new twists on old classics at Astro's Pizza in Amagansett when it opens on Memorial Day weekend under P.J. Calapa's ownership.
By Jennifer Landes

P.J. Calapa, a New York City chef, is the new owner of the Amagansett standby and will offer his version of pizza and Italian classics. He is the owner of Scampi and the Spaniard in the city. His partner in Astro's, Ben Leventhal, is one of the founders of Resy, the app-based and online restaurant reservation service.

The menu will include dishes such as Sicilian sashimi, i.e., a local fish crudo served Italian-style with capers, shallots, lemon, and olive oil; eggplant and chicken Parmigiana, chicken piccata, and mezzaluna Amatriciana, which are pork-filled ravioli in a spicy tomato sauce. Appetizer prices will range from $17 to $25, entrees from $17 to $31, and desserts from $6 to $11.

Tide's In at Navy Beach
Tomorrow, Montauk's Navy Beach will open for its 13th season at 5:30 p.m. for both indoor and outdoor dining. The waterfront restaurant will serve dinner Friday through Sunday and lunch on weekends. Thursdays will be added to the schedule on May 19 and lunch and dinner will be served seven days beginning on June 16.

From Memorial Day through Labor Day, the restaurant will offer launch service to yachts anchoring nearby on Fort Pond Bay. During the same time, the restaurant will support the Navy SEAL Foundation with a dollar from every dining check, offering guests the option to donate more. The restaurant has raised more than $175,000 for the charity over 10 years. A program the restaurant sponsors supports Montauk graduates from East Hampton High School with four scholarships of $500 each.

Reservations can be made through Resy or by calling the restaurant at 631-668-6868 up to two weeks in advance.

Yes to Si Si
Si Si, the EHP Resort and Marina's Mediterranean-flavored and waterfront boite is now open for the 2022 season.

This season, the restaurant is offering its Local Sunset Time specialty menu that features both local favorites and discounts from 5:30 to 7 p.m. at the bar from Thursday through Sunday. Specialty cocktails and share plates are 50 percent off and wine bottles $200 and above are discounted by 20 percent.

Cheng Is the Artist
Philippe Cheng will be the next artist in Almond restaurant's Artists and Writers Dinner series on Monday at 7 p.m.

Mr. Cheng, who will discuss his work, is a fine art photographer working both figuratively and abstractly with a sensitive eye toward the East End light.

Dinner is served family-style and consists of three courses for $49, including a glass of wine or draft beer, with tax and tip extra. Reservations can be made by calling the restaurant at 631-537-5665.

New Brew in Springs
The Springs Brewery will join the Springs farmers market on Saturday from 9 a.m. to 1 p.m., to offer its Treiber Pilsner, brewed with barley from the Treiber Farm on the North Fork. It is described as a "crisp, traditional pilsner, hop-forward with heavy additions of Czech Saaz."